Meet three guys who definitely don’t have “The Right Stuff.”

The dim-bulb astronaut wannabes — who can’t even agree on what the letters in NASA stand for — live together in a Moon Base Simulator in the Arizona desert while training to be the first men to colonize the moon.

They’re in for a bumpy ride.

“These aren’t obvious astronaut choices,” says Krisel, 41. “It’s the comedic trope of the loser who has big dreams. If you were being trained by NASA to live in a confined space, isolated with annoying people, these would be the three most annoyoing people you could use as a litmus test.”

Each man has a somewhat sketchy background: Caputo, who flew a tourist chopper in Honolulu, is a deadbeat dad and tax cheat; Henai idolizes his father, a groundbreaking NASA scientist, yet lives in his shadow; and Rook is an ex-groupie who followed progressive rock band Phish around the country, ingesting and smoking various illegal substances. He’s now a born-again Christian with a litterfull of kids and a pregnant wife who’s awfully chummy with their handsome pastor.

Krisel, who’s worked with Armisen and Heidecker for years on shows including “Portlandia” and “Tim and Eric Awesome Show Great Job!,” says there was no casting involved in “Moonbase 8.”

“We’re four friends who wanted to do something and were like, ‘Let’s make it happen,’ ” he says. “In our minds, [the series] was going to be similar to ‘Curb Your Enthusiasm,’ getting funny people together with a loose outline of an episode — but then we scripted it out.

“It such an extreme environment and really fun to come up with the episodes,” he says of the Moon Base Simulator. “It’s like ‘Gilligan’s Island’ — ‘Who’s going to come this week?’ The four of us really love classic comedy like The Three Stooges … and who better to do this than these guys, who are all masters of a very specific type of comedy.”

The series was done on spec, with funding from A24, and then sold to Showtime, where it premieres Sunday at 11 p.m. 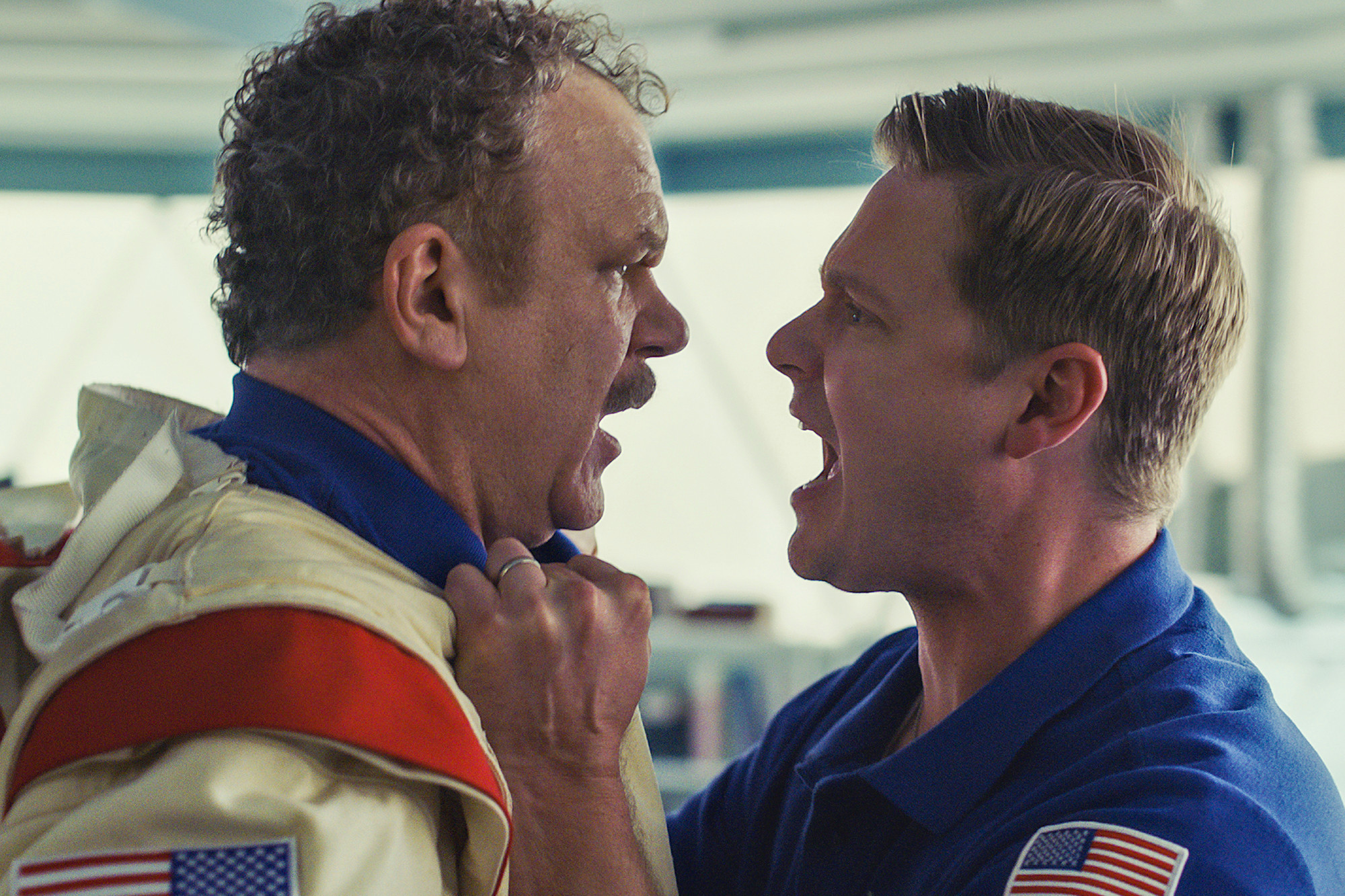 John C. Reilly as Cap and Tim Heidecker as Rook. 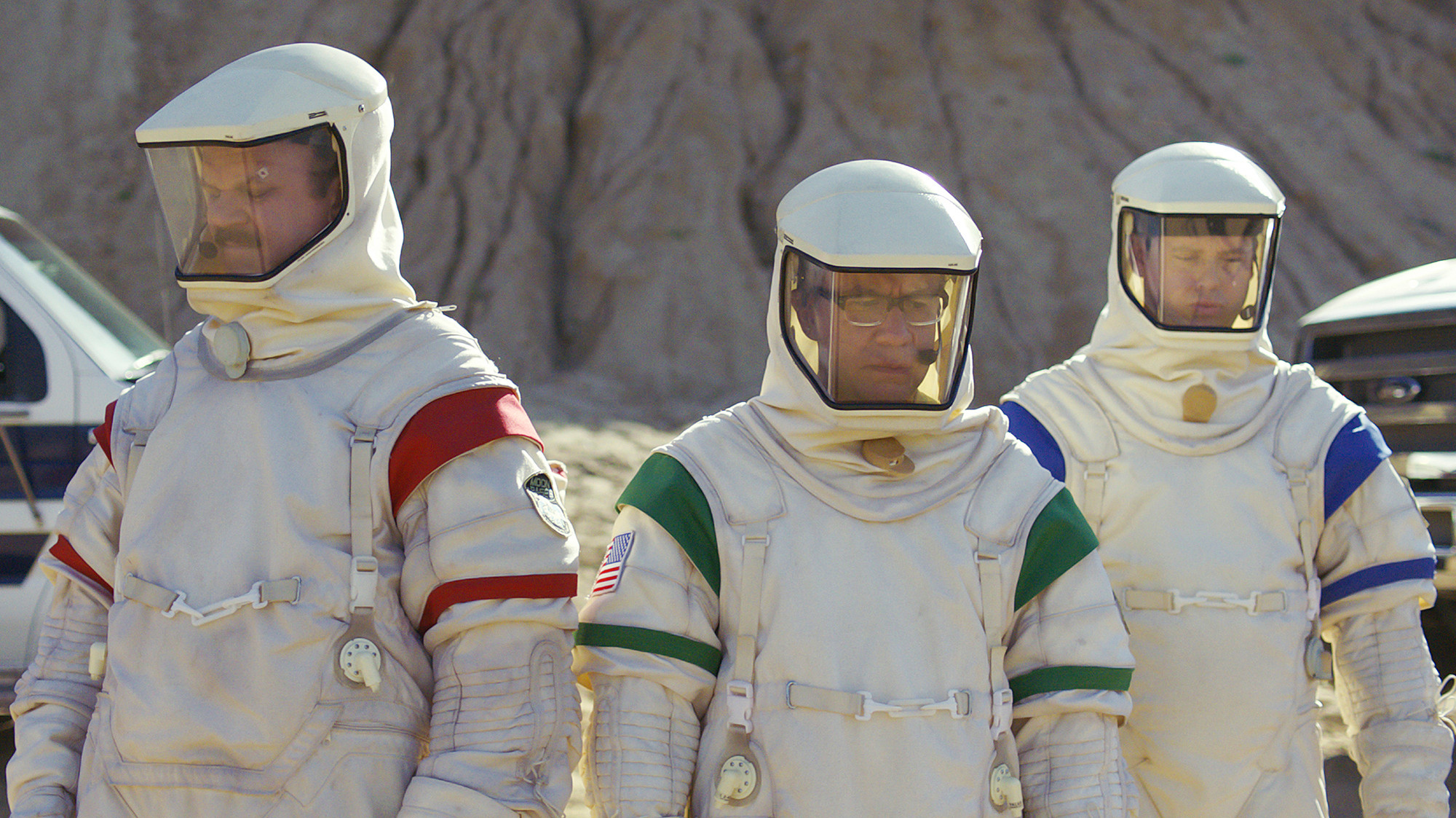 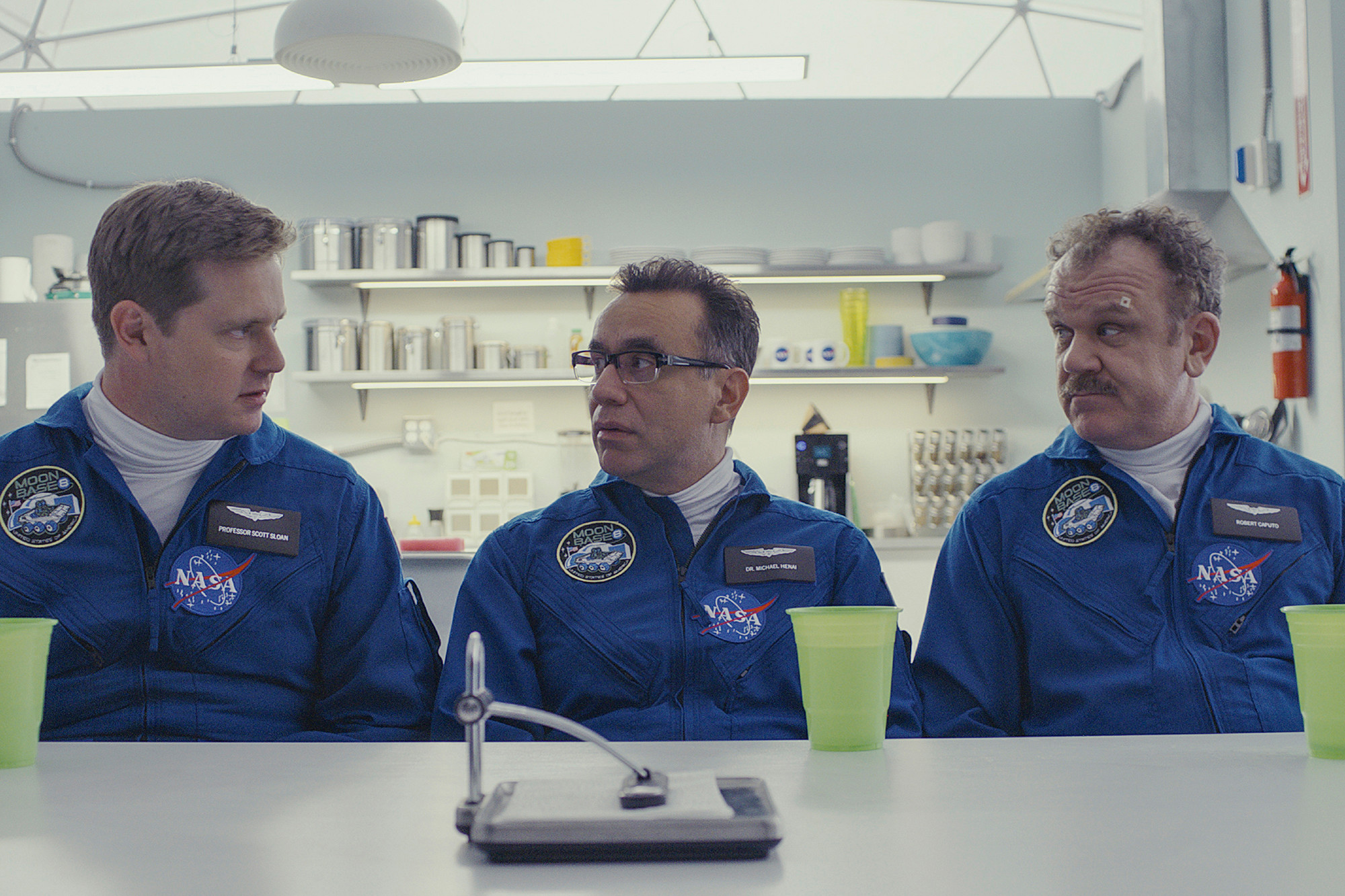 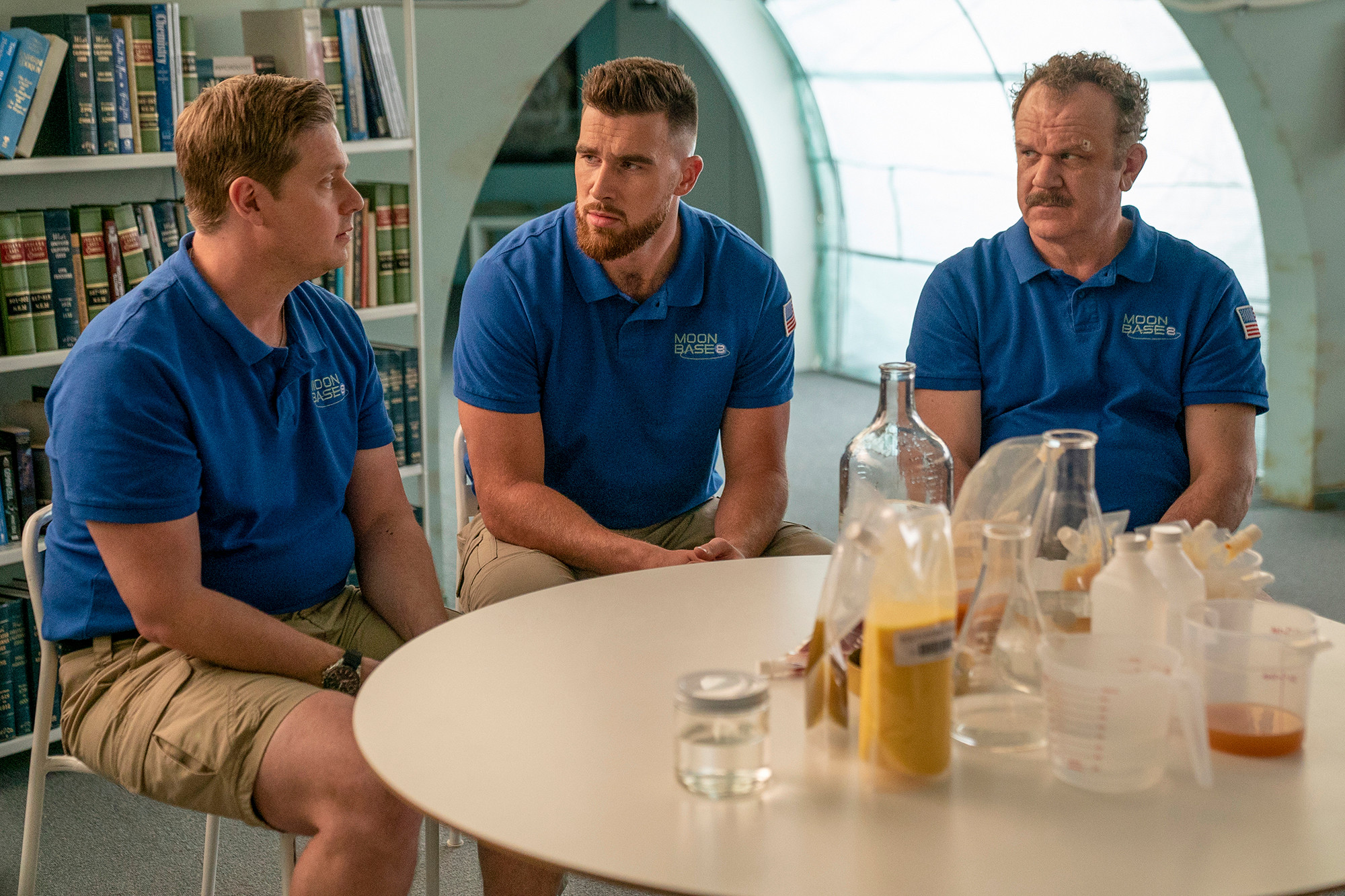 Tim Heidecker as Rook, Travis Kelce as himself and John C. Reilly as Cap. 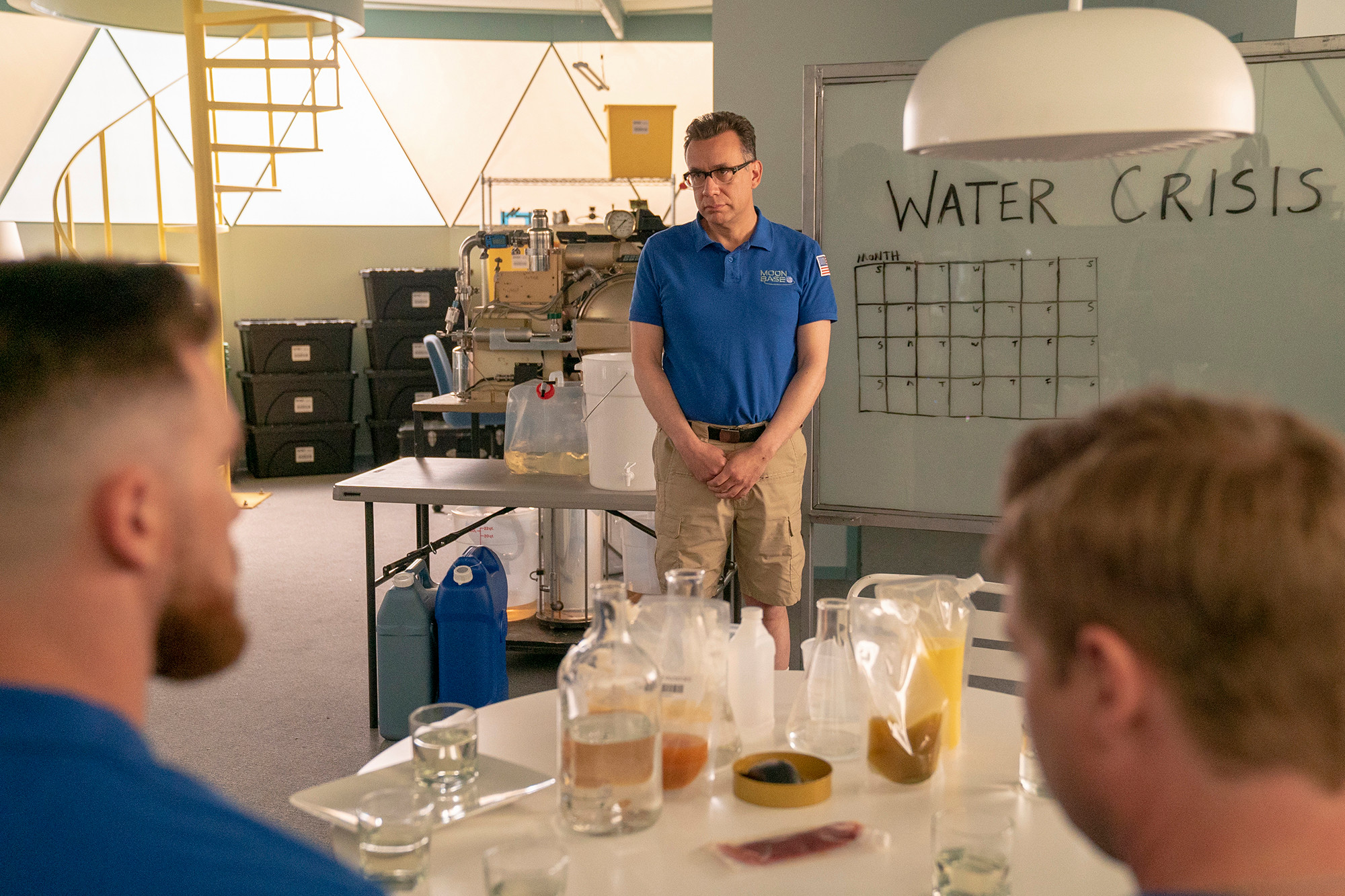 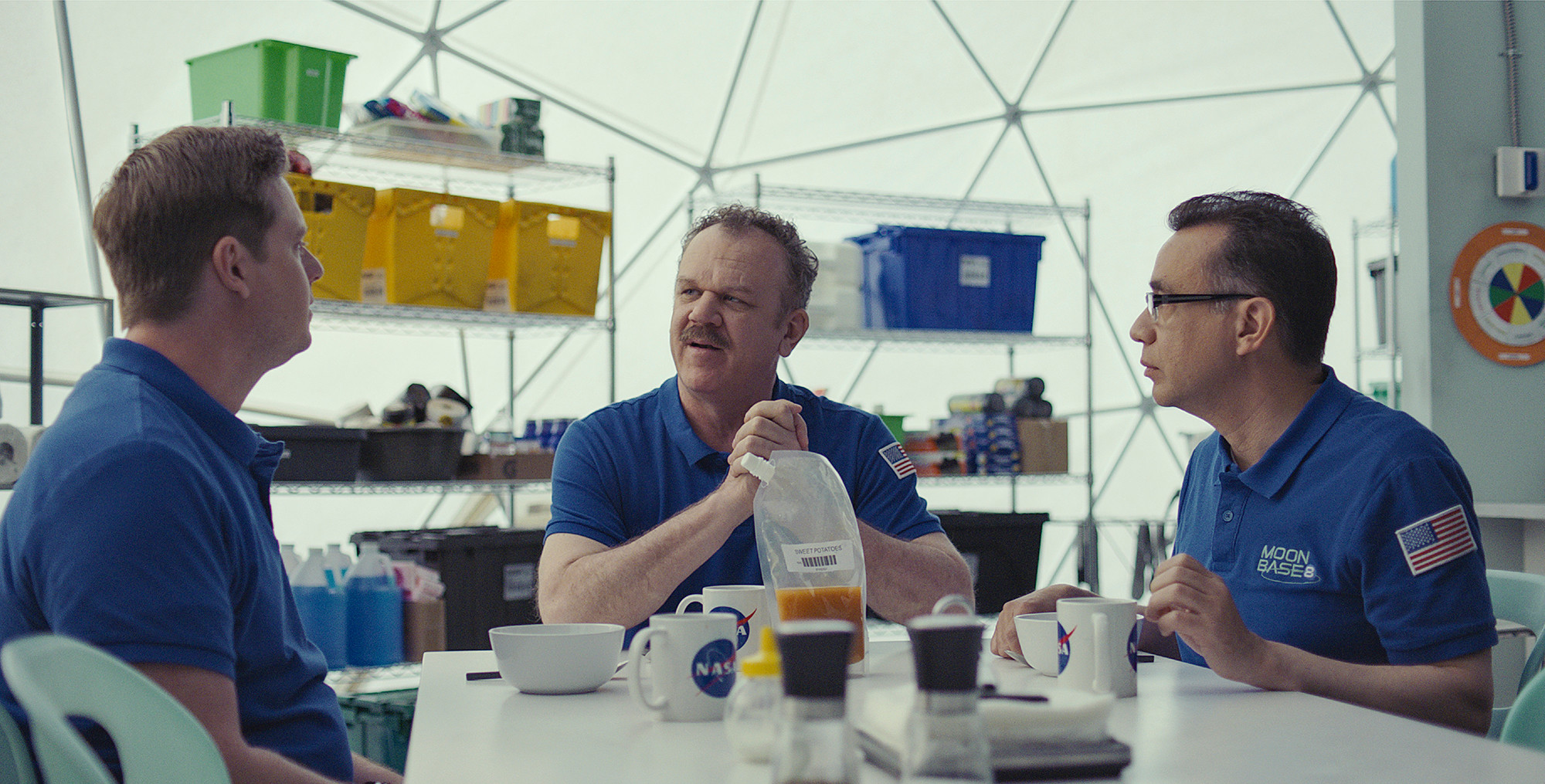 “We filmed in a sand pit in Simi Valley … that was the closest thing to LA that looked like it was out in the middle of nowhere,” Krisel says. “It was more like an indie-style project. The other idea was to keep it very low-budget; there are barely any actors in this, only two locations — inside and outside — and we could do whatever we wanted without breaking the bank … in a self-contained location, which was really helpful.”

Krisel says that he and Reilly, Heidecker and Armisen originally thought about setting “Moonbase 8” on Mars.

“I was like, ‘Mars is a kind of new thing’ — Elon Musk is trying to get there — but thought … that the moon is a little bit more romantic,” he says. “There are songs about the moon; it’s part of our lives. Mars is a foreign, weird planet that’s kind of cool because we’ve never been there, but the moon is in pop culture.

“For these three dopes [the moon] is part of their childhood,” he says. “They grew up on space and it still has that bluster to it.”