Stephen A. Smith, ESPN going all in on tales of ‘white privilege’

Given that I’m assigned to cover sports as delivered by TV, two recent developments have become dominant, repetitive themes: 1) If you don’t have a bet or bets on the games, you’re out of touch with sports, especially how they plan to sustain viewership and TV billions by suckering the young and vulnerable. How would …

Given that I’m assigned to cover sports as delivered by TV, two recent developments have become dominant, repetitive themes:

1) If you don’t have a bet or bets on the games, you’re out of touch with sports, especially how they plan to sustain viewership and TV billions by suckering the young and vulnerable.

How would MLB now welcome Pete Rose to the Hall of Fame? “Come on in, Pete! Gambling on baseball is good!”

2) The United States is nearly unredeemable as a racist nation and must immediately change!

As for 1), I think it’s too late. Outside of an occasional bet on a big horse race, my sports betting days ended in the 1980s with the realization that it was a waste of time, thought and money.

As for 2), I don’t know what to do or how I can change for the better. I pay my taxes, I don’t litter, I’m an embracing father and grandfather, I took 10 years to pay off my college loan, I began at the bottom and I perform charity work, including for Habitat for Humanity.

Oh, and I have never oppressed a minority.

I do not, however, suffer people who would continue to point American blacks to the rear for a living — genuine oppressors. Thus, I decry the lyrics of rap music that sexually degrades women, celebrates gun violence and, now, by tacit decree, references black men with the N-word.

I was raised — and I raised my kids — to consider that word as the worst of slurs. I don’t see an excusable context, let alone a rhythmic upside to it. And I’m flabbergasted that our sports and their networks have increasingly chosen to attach themselves to such artistry while simultaneously encouraging white viewers to take stock of themselves as racists.

And I wouldn’t exploit our national anthem or flag for any purpose.

Yet, for all that I’m condemned as a racist.

Saturday on ESPN, Serena Williams and Sloane Stephens, two black women, were engaged in a tight, entertaining match at the U.S. Open. Suddenly, ESPN did what it so often does. It decided we didn’t really care about what we’d tuned in to watch, thus it squeezed the match to a postage stamp and hacked the screen into thirds.

Why? This was the time for Chris Fowler and Chris Evert to conduct a remote interview with black comedian and actress Wanda Sykes, whose show, “Black-ish” appears — what a coincidence! — on ESPN’s Disney sibling network, ABC. The session was long, awkward, needless, totally forced and insulting.

And, of course, it included the now obligatory lecture on racial and social justice, as if those who chose to watch a match between two black women were predominated by white supremacists.

This week, ESPN’s Man For All Reasons, Stephen A. Smith, was again self-ensnared by his rotten guesswork.

First, he claimed that the Nets’ hiring of Steve Nash, sans NBA head coaching portfolio, was an example of “white privilege.”

That was quickly and decisively debunked even by frightened, race-pandering media. On TNT, Charles Barkley and Ernie Johnson gave four examples — Derek Fisher, Jason Kidd, Isiah Thomas and Doc Rivers — to the contrary.

But the next day, Smith was left to chase his own tail and tale. He figured he could holler his way out:

“I mentioned white privilege, yesterday. I have a message to those who feel that I was wrong, that I need to apologize, that I don’t know what I’m talking about, etcetera. I don’t give a damn what y’all feel. Y’all can all kick rocks. I don’t give a damn. I’m not budging from my position one inch.

“I’m talking about championship ready, and it would be a shock if you don’t win 50 games and you’re not contending for a crown. Black folks with no résumé getting a job like that? I have been covering the NBA for 25 years … brothers do not get those opportunities.”

In other words, he realizes he was wrong — dead wrong — but he has the privilege to be wrong, then tell everyone else to go to hell. And this purveyor of social justice and wisdom remains ESPN’s No. 1 man.

I don’t know how to peacefully protest the plight of black Americans or join the activities of Black Lives Matter con artists by destroying all achievements in sight, nor by ignoring the escalating daily slaughter of urban blacks by urban blacks, but I’m willing to learn.

Perhaps Smith, Stephen A. Smith will help me.

And for those who can still stand it, Sunday’s NFL telecasts will be packed with audio and visual reminders that white viewers, no matter their accomplishments and how they succeeded or failed, are all born and raised racists.

Kay has timeline out of whack

Yankeeography: On Tuesday during Yankees-Blue Jays on YES, Michael Kay noted a clubhouse scuffle between the Yanks’ Goose Gossage and Cliff Johnson in which Gossage hurt his thumb. That, said Kay, “opened the door for Dave Righetti to become the Yanks’ closer.”

Johnson last played for the Yankees in 1979. Righetti became the closer in 1984.

Monday’s disqualification of U.S. Open top men’s seed Novak Djokovic after, in a moment of frustration, he hit a ball — not the least bit hard — that accidentally struck a lineswoman in the throat was curious. Though rules are rules, the punishment seemed to exceed the crime.

But there was an upside: TV money wasn’t the decisive factor. 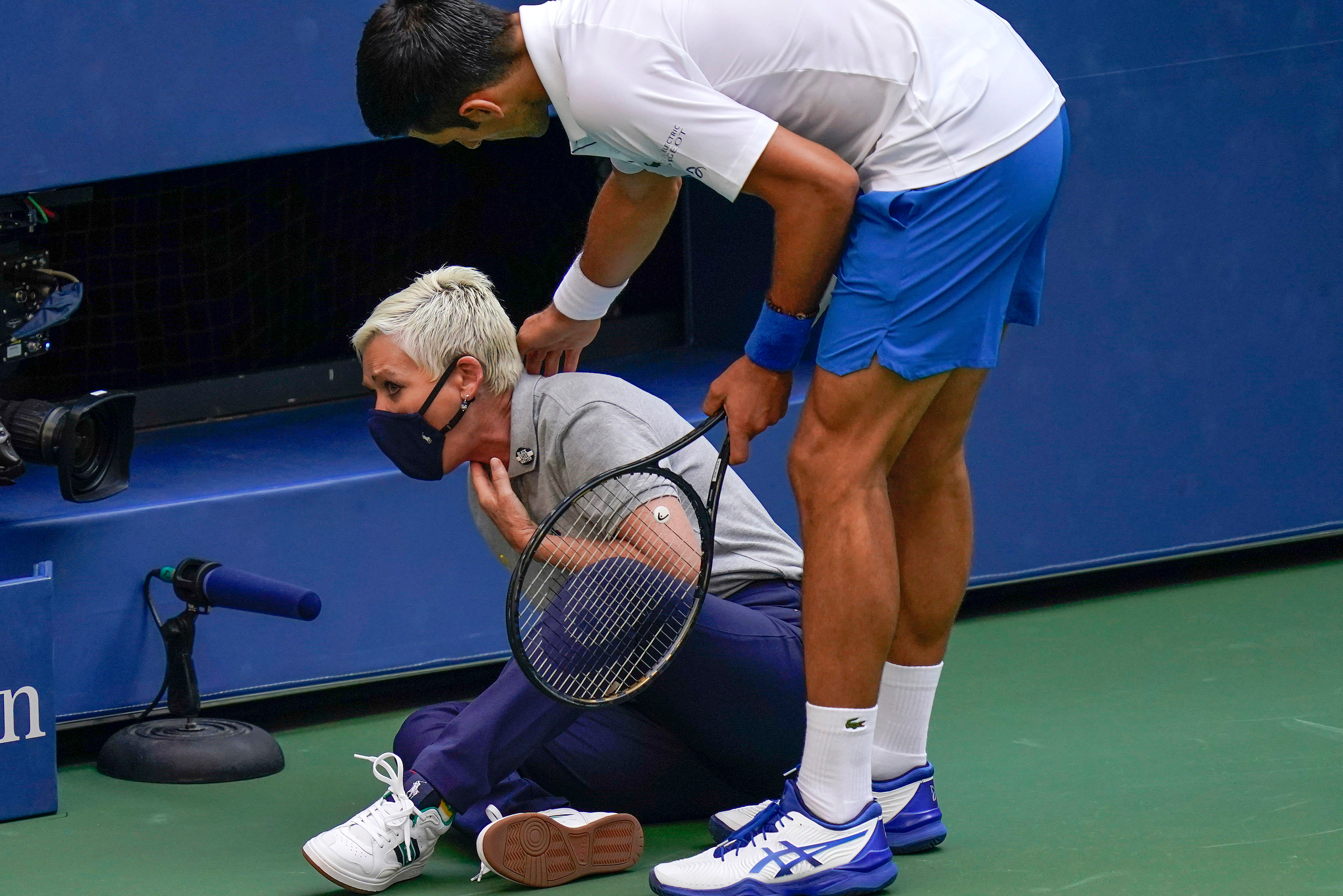 The female line judge accidentally hit in the throat by…

NBC still tries to sell the FedEx Cup as golf’s “Fifth Major” when it’s a pure money-grab — $15 million to the winner, and even eighth place gets $1 million.

But with no gallery to absorb the noise, Sunday’s coverage included the nostalgic musical sound of a Mister Softee truck rolling by.

When I was a kid I’d grow excited by the sound of the ice cream truck headed down our street, and would ask my dad for 15 cents. “No,” he’d say, “they play that music when they’re out of ice cream.”

How do today’s big leaguers hit .200? The Wilson Ramos Method! Sunday, the Mets’ catcher was 1-for-5 — one home run and four strikeouts.

More from: USAGAG
1
Best Tips for Free Fire Beginners How to play ...
2
Among Us: Best Tips to succeed as a Crewmate ...
3
The birth of the modern American libertarian movement can ...
4
The Shabaka Stone: Ancient Relic tells of God Ptah ...
Filed under equal time ,  espn ,  michael kay ,  novak djokovic ,  social justice ,  stephen a. smith ,  us open tennis