When Zendaya Coleman and Bella Thorne struck tween celebrity status with the 2010 Disney sitcom “Shake It Up,” they were hardly the best friends they portrayed on-screen. “We were kind of forced to compete against each other,” Thorne told J-14 magazine in 2017. “It was, ‘Who’s better at this?’ and ‘Who’s better at that?’ ” There’s no …

When Zendaya Coleman and Bella Thorne struck tween celebrity status with the 2010 Disney sitcom “Shake It Up,” they were hardly the best friends they portrayed on-screen.

There’s no competing anymore. While the two eventually sorted out their baggage by the show’s second season — after a deep convo where they “put everything out there on the table,” they “became best friends,” said Thorne — they took divergent career paths. Both are famous today, but for very different things.

This week, Thorne made headlines for raking in $2 million dollars in just a week on OnlyFans, an X-rated subscription service where oglers pay $20 a month for her sexy premium content. The hype around her adult debut made $1 million in the first 24 hours and crashed the popular platform’s site  — even though there is “no full nudity” on her page, a rep for OnlyFans told Page Six.

Meanwhile, Zendaya — who dropped her last name professionally — has carved out a more elegant and acclaimed role for herself. Last month, the 23-year-old, who has a “standing invite” to the exclusive Met Gala and an ad deal with luxury cosmetics brand Lancôme, was nominated for an Emmy for her portrayal of a recovering drug addict in HBO’s drama series “Euphoria.”

The women could have been Tinseltown twinsies, but instead they are living out two different Hollywood endings based on their upbringings and choices.

Even their pets highlight their differences: Thorne’s Australian Shepherd’s name is Tampon, while Zendaya’s black-furred pup is called Noon.

The pressure to be famous and a fractured family life led Thorne down a dark path. The star, who is named after Belle from “Beauty and the Beast,” started auditioning for commercials at 6 weeks old. She lost her father in a motorcycle accident when she was 9 and said she was expected to be a breadwinner from a young age. “I remember walking into the audition — it wasn’t a choice, it was, ‘This pays the bills, this is what you do,’” Thorne told Vogue about her Disney tryout.

“We were living off Stouffer’s coupons, and that’s what we had to eat every day,” Thorne revealed on an MTV podcast. “We were about to live physically on the street if I didn’t have that role.” At the time, Thorne was portraying Tancy Henrickson in the fourth season of the acclaimed HBO show “Big Love,” but that paycheck wasn’t enough to support her family.

In addition to the financial stress, Thorne claims to have been sexually abused from the ages of 6 to 14, at the hand of someone who was “there the whole entire time. He drove me to set, he was in my dressing room,“ according to an interview she gave on YouTube to vlogger Jake Paul. “I felt like I was so drowned, and I was in such a dark place growing up and I contemplated suicide.”

Regarding her childhood, she told “Good Morning America,” “I wanted acceptance . . . appreciation and love,” and added. “I never spoke up.”

Thorne eventually wrote a cathartic apology directed toward her “compulsive liar” mother, Tamara, on Instagram last year. “Our relationship is f - - ked up but I’m glad we are here,” she wrote.

Zendaya was also a child actress even before Disney, but was performing in classics such as “Twelfth Night” and “Richard III” at the California Shakespeare Theater, where her mom worked as house manager. She also joined a dance group, Future Shock Oakland, at age 8, and described her home life on Ellen in 2016. “I’m really lucky to have the parents I have,” she said. “I have that barrier and protection around me,” she said.

Zendaya, in an interview for Vogue’s 73 Questions series called herself “a loner, kind of like an introvert” and said she sometimes unwinds by doing “nothing, I just stay inside and watch Harry Potter.” Coincidentally, Zendaya’s “Euphoria” character, Rue, matches up more with Thorne’s actual dark and glittery persona than Zendaya’s chilled-out one.

But they still seem to have each other’s backs. Last year, when Thorne decided to leak her own nude photos after she had been hacked, and allegedly blackmailed Whoopi Goldberg laid into her on “The View.” “If you’re famous, I don’t care how old you are, you don’t take nude pictures of yourself,” said Goldberg.

Along with a tearful video reacting to the news, she posted about support she had received from Zendaya following the incident. “Just a reminder that you are strong and courageous and beautiful inside and out,” read the text from her friend. “Just letting you know you’re a light and I’m superproud.”

On social media, Thorne has lately been encouraging her followers to vote, and has been on a crusade against excessive retouching of photos on social media and in magazines, and even suggested that Instagram block the use of apps like Facetune.

“There’s a tremendous authenticity to Bella,” director Scott Speer, who worked with Thorne on “Midnight Sun,” told The Post in 2018. “I think the reason she really resonates with people is, what you see is kind of what you get.”

What we get: pics from a ride on a private jet stocked with KFC and Champagne to Vegas to celebrate her 21st birthday, a peek at nipple piercings in a see-through shirt, and a cannabis lifestyle brand. These things might not be what the Disney Channel tried to cultivate with young Thorne. The entertainment behemoth is notorious for trying to keep a tight grip on young stars’ squeaky clean images, often causing the celebs-in-training to crack under the pressure and rebel even more.

“I was always a rebel,” said Thorne in a SiriusXM interview. She told Vogue, “My agents used to say, your transition we think should be Disney to comedy to lead love interest comedy to Rachel McAdams type-vibe . . . I love Rachel McAdams, but I’m not Rachel McAdams.”

And Thorne won’t stop being a badass anytime soon.

“One thing I can thank my mom for is [my hustle],” she told Vogue.  “It’s embedded in my system,” said multi-hyphenate Thorne, who can now add sex symbol to her résumé. “I can never procrastinate.” 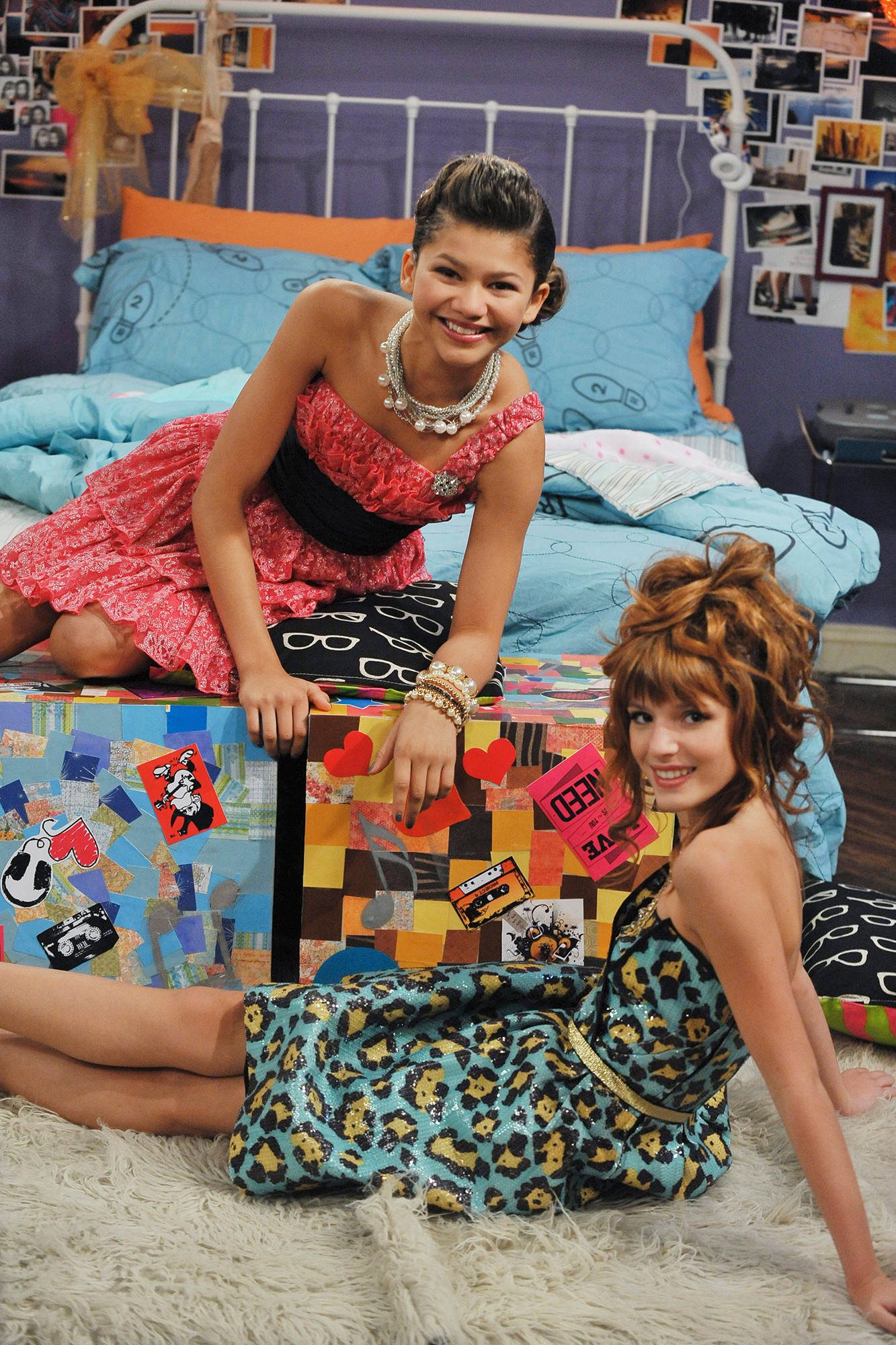 Zendaya and Bella Thorne are all smiles and glam in Season 1 of “Shake It Up.” 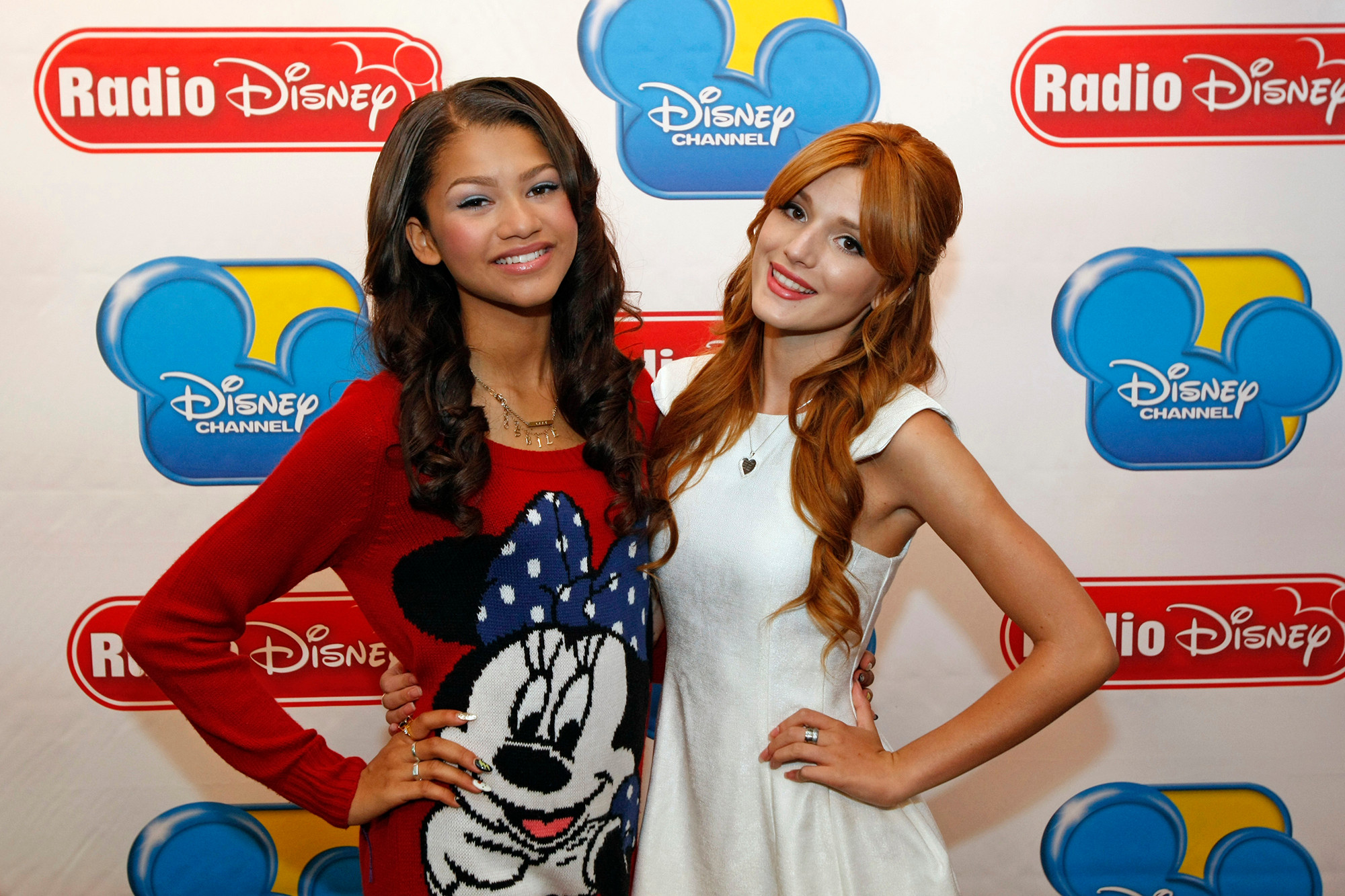 Zendaya and Bella Thorne hit a red carpet together in 2012. 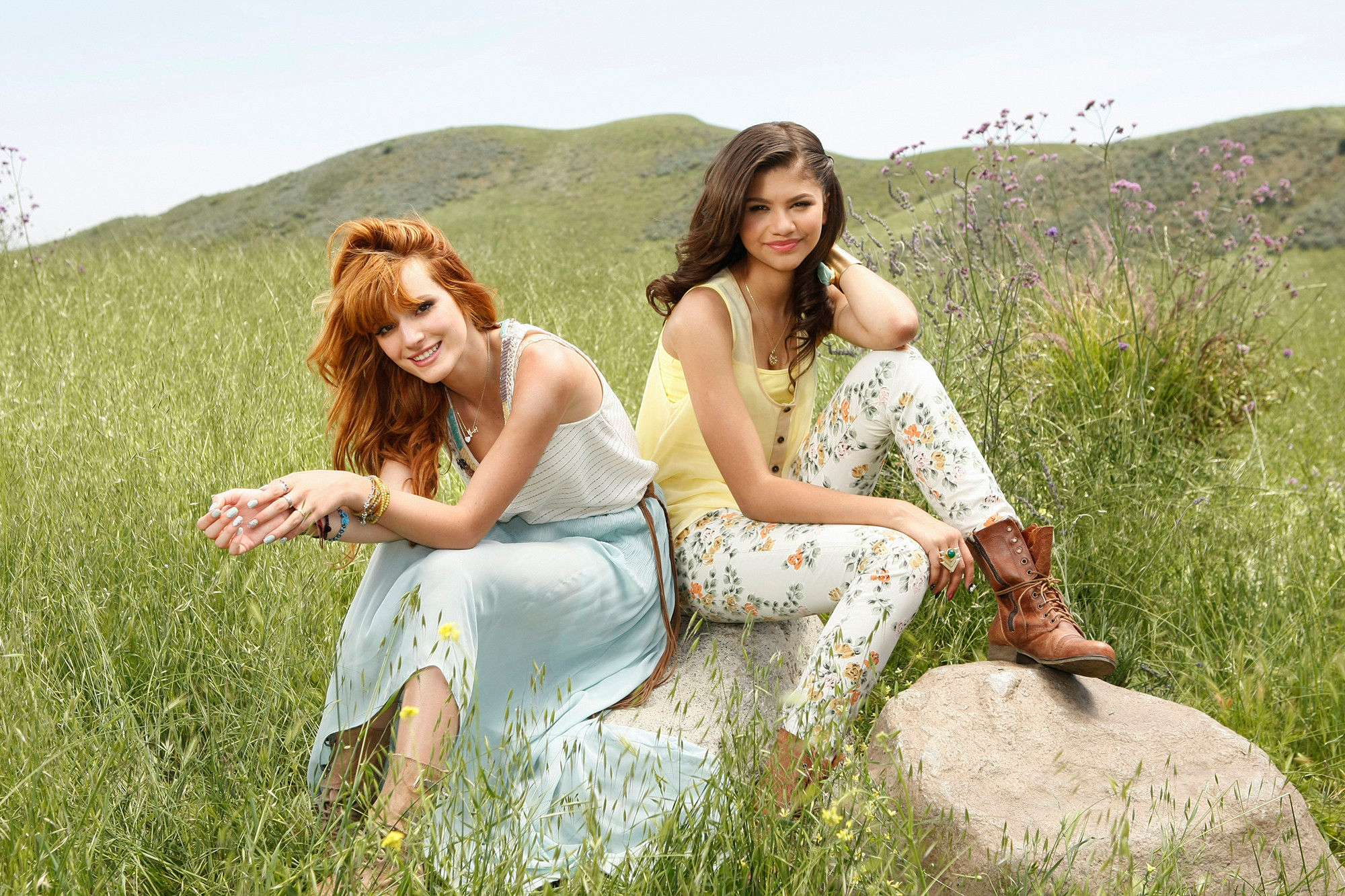 Bella Thorne and Zendaya were Disney Friends for Change ambassadors in 2012.