Happy Bastille Day: What the French Revolution Means for Liberty

The Chinese premier Zhou Enlai is famously (but apparently inaccurately) quoted as saying, “It is too soon to tell.” I like to draw on the wisdom of another mid-20th-century thinker, Henny Youngman, who when asked “How’s your wife?” answered, “Compared to what?”

Conservatives typically follow Edmund Burke’s critical view in his Reflections on the Revolution in France. They may even quote John Adams: “Helvetius and Rousseau preached to the French nation liberty, till they made them the most mechanical slaves; equality, till they destroyed all equity; humanity, till they became weasels and African panthers; and fraternity, till they cut one another’s throats like Roman gladiators.” 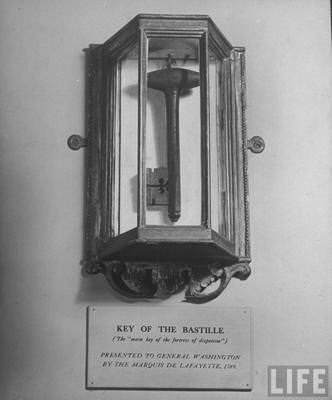 But there’s another view. And visitors to Mount Vernon, the home of George Washington, get a glimpse of it when they see a key hanging in a place of honor. It’s one of the keys to the Bastille, sent to Washington by Lafayette by way of Thomas Paine.

They understood, as the great historian A.V. Dicey put it, that “The Bastille was the outward visible sign of lawless power.” And thus keys to the Bastille were symbols of liberation from tyranny.

Traditionalist conservatives sometimes long for “the world we have lost” before liberalism and capitalism upended the natural order of the world. The diplomat Talleyrand said, “Those who haven’t lived in the eighteenth century before the Revolution do not know the sweetness of living.”

But not everyone found it so sweet. Lord Acton wrote that for decades before the revolution “the Church was oppressed, the Protestants persecuted or exiled, … the people exhausted by taxes and wars.” The rise of absolutism had centralized power and led to the growth of administrative bureaucracies on top of the feudal land monopolies and restrictive guilds.

The French state engaged in wars throughout the 17th and 18th centuries. To pay for the wars, it employed complex and burdensome taxation, tax farming, borrowing, debt repudiation and forced “disgorgement” from the financiers, and debasement of the currency. Lord Acton wrote that people had been anticipating revolution in France for a century. And revolution came.

Liberals and libertarians admired the fundamental values it represented. Ludwig von Mises and F. A. Hayek both hailed “the ideas of 1789” and contrasted them with “the ideas of 1914” — that is, liberty versus state-directed organization.

1. Men are born and remain free and equal in rights… .

2. The aim of all political association is the preservation of the natural and imprescriptible rights of man. These rights are liberty, property, security, and resistance to oppression… .

4. Liberty consists in the freedom to do everything which injures no one else; hence the exercise of the natural rights of each man has no limits except those which assure to the other members of the society the enjoyment of the same rights….

17. [P]roperty is an inviolable and sacred right.

But it also contained some dissonant notes, notably:

3. The principle of all sovereignty resides essentially in the nation. No body nor individual may exercise any authority which does not proceed directly from the nation… .

6. Law is the expression of the general will.

A liberal interpretation of those clauses would stress that sovereignty is now rested in the people (like “Governments are instituted among Men, deriving their just powers from the consent of the governed”), not in any individual, family, or class.

But those phrases are also subject to illiberal interpretation and indeed can be traced to an illiberal provenance. The liberal Benjamin Constant blamed many of France’s ensuing problems on Jean-Jacques Rousseau, often very wrongly thought to be a liberal:

By transposing into our modern age an extent of social power, of collective sovereignty, which belonged to other centuries, this sublime genius, animated by the purest love of liberty, has nevertheless furnished deadly pretexts for more than one kind of tyranny.

That is, Rousseau and too many other Frenchmen thought that liberty consisted in being part of a self-governing community rather than the individual right to worship, trade, speak, and “come and go as we please.”

The results of that philosophical error — that the state is the embodiment of the “general will,” which is sovereign and thus unconstrained — have often been disastrous, and conservatives point to the Reign of Terror in 1793-94 as the precursor of similar terrors in totalitarian countries from the Soviet Union to Pol Pot’s Cambodia.

In Europe, the results of creating democratic but essentially unconstrained governments have been far different but still disappointing to liberals. As Hayek wrote in The Constitution of Liberty:

The decisive factor which made the efforts of the Revolution toward the enhancement of individual liberty so abortive was that it created the belief that, since at last all power had been placed in the hands of the people, all safeguards against the abuse of this power had become unnecessary.

Governments could become vast, expensive, debt-ridden, intrusive, and burdensome, even though they remained subject to periodic elections and largely respectful of civil and personal liberties. A century after the French Revolution, Herbert Spencer worried that the divine right of kings had been replaced by “the divine right of parliaments.”

Still, as Constant celebrated in 1816, in England, France, and the United States, liberty

is the right to be subjected only to the laws, and to be neither arrested, detained, put to death or maltreated in any way by the arbitrary will of one or more individuals.

It is the right of everyone to express their opinion, choose a profession and practice it, to dispose of property, and even to abuse it; to come and go without permission, and without having to account for their motives or undertakings.

It is everyone’s right to associate with other individuals, either to discuss their interests, or to profess the religion which they and their associates prefer, or even simply to occupy their days or hours in a way which is most compatible with their inclinations or whims.

More from: GAGmen
1
The 10 best (and 5 worst) movies of 2020
2
2020 was a Hell of a year
3
Darth Vader actor Dave Prowse dies at age 85
4
Why a second season of 'The Undoing' is unlikely
Filed under American Revolution ,  Bastille Day ,  French Revolution

Most Popular This Week
1
Biden's Presidency Is the Modern Version of Jimmy Carter's
2
Cancel culture feeds on apologies. The only way to ...
3
The fourth president of the United States: James Madison
4
Why European have suspended AstraZeneca vaccine
5
Senate Confirms Trojan Horse Picks For Biden’s Radical Energy ...
6
The birth of the modern American libertarian movement can ...
7
16 Choice Quotes from the James Madison
8
Child Suicide is Becoming an ‘International Epidemic’ Amid Pandemic
9
How Woke Whites Are Turning Minorities Into Republican Voters
10
When COVID relief is just plain pork spending