Donald Trump blasted Colin Powell as ‘overrated’ and a ‘stiff’ on Sunday after the former national security adviser and secretary of State said he would not be supporting the president’s reelection in November. ‘Colin Powell, a real stiff who was very responsible for getting us into the disastrous Middle East Wars, just announced he will …

Donald Trump blasted Colin Powell as ‘overrated’ and a ‘stiff’ on Sunday after the former national security adviser and secretary of State said he would not be supporting the president’s reelection in November.

‘Colin Powell, a real stiff who was very responsible for getting us into the disastrous Middle East Wars, just announced he will be voting for another stiff, Sleepy Joe Biden,’ Trump charged in a Sunday morning tweet. ‘Didn’t Powell say that Iraq had ‘weapons of mass destruction?’ They didn’t, but off we went to WAR!’

Earlier in the morning, Powell joined the list of high-profile Republicans, including George W. Bush and Mitt Romney, who are not voting for Donald Trump in 2020 as the president’s own party is turning against him in the midst of nationwide turmoil.

The Reagan-era National Security Advisor told CNN on Sunday morning: ‘I cannot in any way support President Trump this year.’

Powell, who served as George W. Bush’s secretary of State, explained his reasoning had to do with the way the president treats people and has reacted to the coronavirus pandemic race riots.

‘We have a Constitution and we have to follow that Constitution and the President has drifted away from it,’ Powell said regarding the treatment of protesters who took to the streets after George Floyd’s death.

‘I’m very close to Joe Biden in a social matter and on a political matter,’ Powell continued. ‘I have worked with him for 35, 40 years. And he is now the candidate, and I will be voting for him.’

Trump clapped back on Twitter shortly after the interview aired and asserted that electing Biden or any other Democrat would lead to the defunding of police and military in the U.S.

‘Not only will Sleepy Joe Biden DEFUND THE POLICE, but he will DEFUND OUR MILITARY! He has no choice, the Dems are controlled by the Radical Left.’

‘Sleepy Joe Biden and the Radical Left Democrats want to ‘DEFUND THE POLICE’. I want great and well paid LAW ENFORCEMENT. I want LAW & ORDER!’ Trump continued in another tweet. 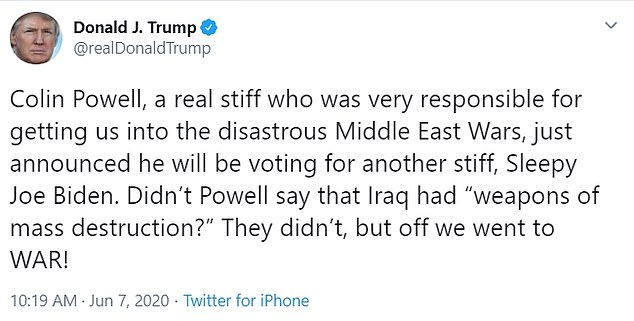 Trump lashed out at Colin Powell on Twitter, claiming he is a ‘stiff’ who is to blame for getting the U.S. involved in ‘Middle East Wars’

He also called the retired four-star Army general, who is also a Reagan-era national security adviser and served as George W. Bush’s secretary of State, ‘overrated’ 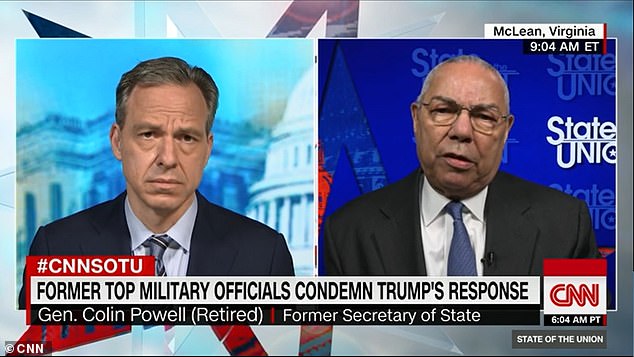 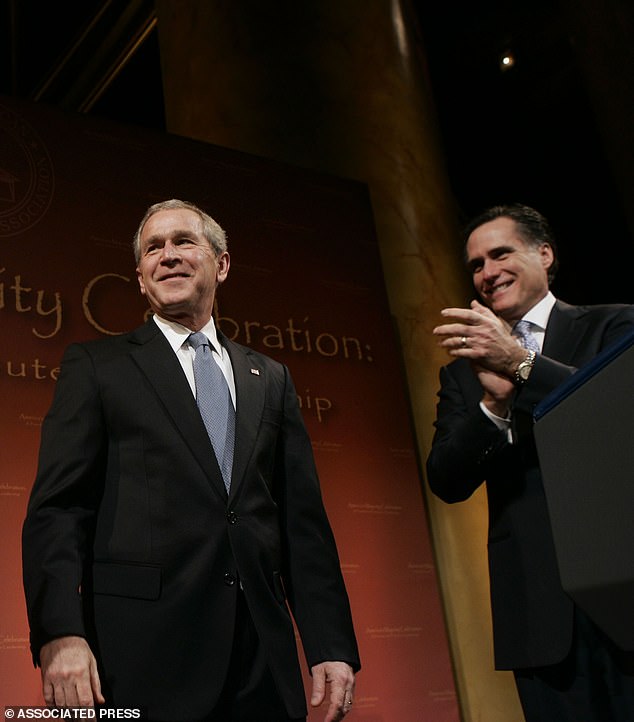 The comments came after other high profile Republicans, including former President George W. Bush (left) and Utah Senator Mitt Romney (right), reportedly indicated that they will not vote for Trump in 2020

Trump carried on with his criticism of Powell as he touted his presidential successes so far.

The retired four-star Army general also praised other former and current military leaders for condemning the president’s decision to call in active duty military to the Washington D.C. area to quell protests.

Among those who chastised the move were former Defense Secretary Jim Mattis and current Joint Chiefs of Staff Mark Milley.

The condemnation of the president comes as he loses ground among some of his most loyal supporters, and is still trailing Democratic nominee Joe Biden by 7 percentage points, a new NBC News/Wall Street Journal poll revealed Sunday.

Trump lashed out at his competitor on Twitter Sunday morning, claiming Biden is ‘controlled by the Radical Left’ and warning Republicans that he will ‘defund police’ if elected president.

As of Saturday, Biden secured enough delegates in primary elections across the country to win the Democratic nomination – even though he has been the presumed nominee since April, when remaining Democratic competitor Vermont Senator Bernie Sanders dropped out.

While former President Bush is also not going to back the re-election of President Trump, according to a report from The New York Times, it is not clear if that means he will support Biden.

The nation’s 43rd president is one of several members at the top of the GOP who are keeping quiet on their support for the incumbent.

Republican Senator Mitt Romney of Utah, who was the 2012 Republican presidential nominee, is also said to be considering placing a vote for Biden.

Neither Bush nor Romney, however, voted for Trump in the 2016 election. 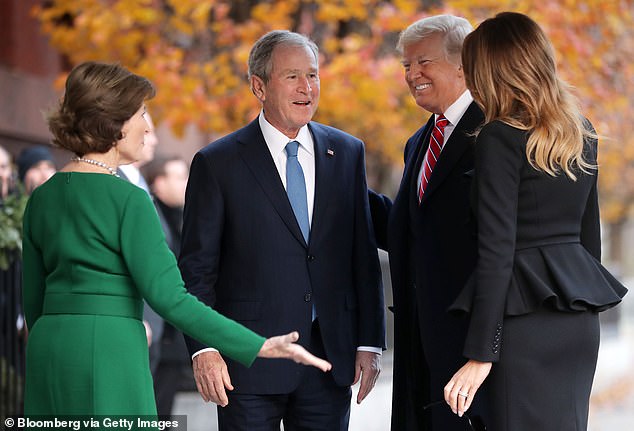 America’s 43rd president George W. Bush will not vote for Trump in the election, the NYT reported 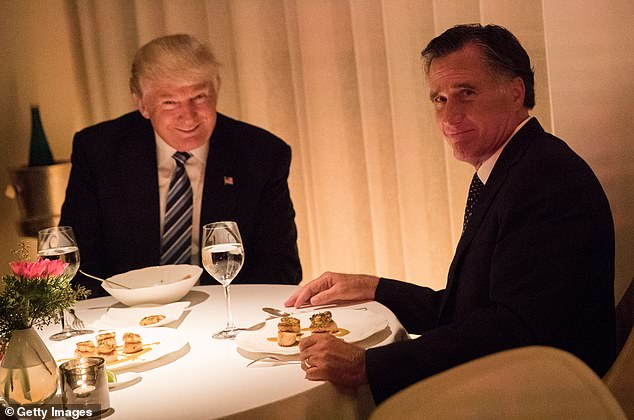 Romney, pictured here soon after Trump won his election in 2016, is also not planning on  voting for the president and is reportedly considering casting his ballot for Biden 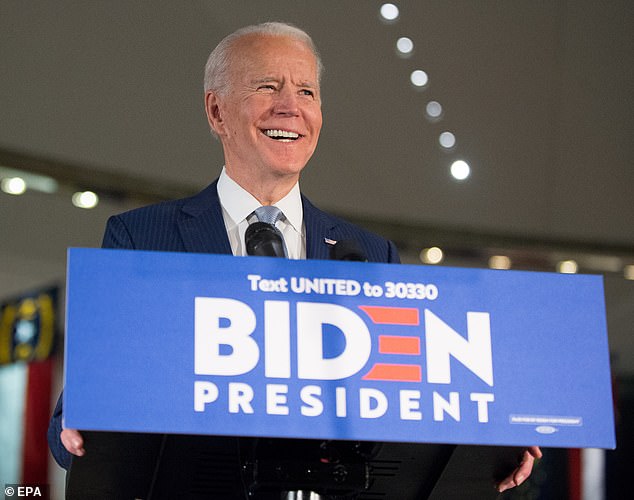 Joe Biden, who just clinched enough delegate to earn the Democratic nomination, is said to be about to launch a ‘Republicans for Biden’ arm to his campaign 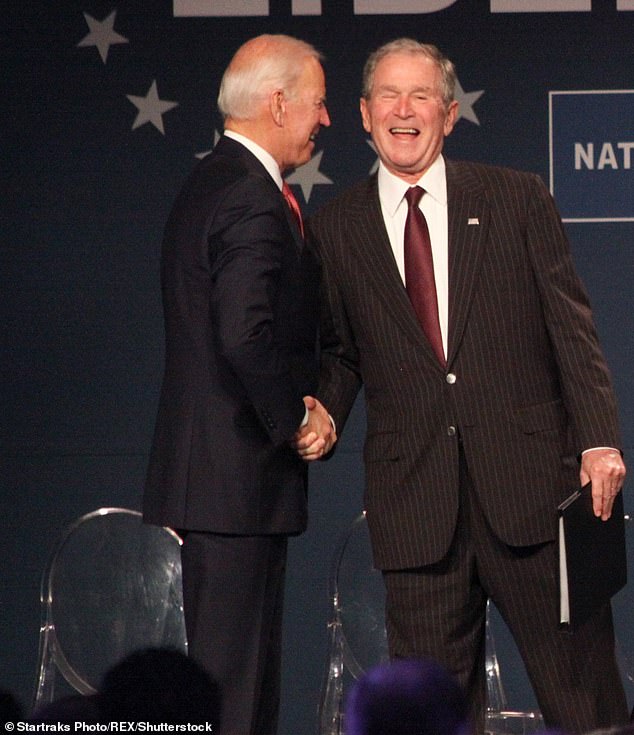 Pundits also said it’s possible that Bush could consider voting for Biden, but the former president has not said anything on the matter

Bush has not spoken out publicly against Trump, but the president tweeted about his predecessor during his impeachment trial.

‘Oh bye [sic] the way, I appreciate the message from former President Bush, but where was he during Impeachment calling for putting partisanship aside,’ Trump wrote on Twitter. ‘He was nowhere to be found in speaking up against the greatest Hoax in American history!’

Dan Bartlett, who served in the Bush White House as counselor to the president told Statesman he hasn’t ‘heard of anything about Bush even contemplating an endorsement and would be surprised if he jumped in on either side.’

‘He’s obviously not a fan,’ Updegrove said when it comes to George W’s feelings about Trump. ‘He told me in mid-2016 that Trump ‘really doesn’t understand the job of president’ and later that he voted for ‘none of the above’.

Updegrove said that it was unlikely Bush would vote for Biden but he wouldn’t be endorsing Trump.

Bush’s brother, Jeb, is also planning not to vote for Trump, along with Senator Romney as well.

Others include John McCain’s widow, Cindy McCain, who is likely to vote for Biden.

The report also notes Republican former Speaker Paul Ryan and former Speaker John Boehner are not declaring publicly how they will vote but some in the GOP may decide to go for a third-party contender or simply openly declare their vote for Biden who is about to launch a ‘Republicans for Biden’ arm to his campaign.

The Times reports that the numbers of Republicans thinking of holding back a vote for Trump is growing with some possibly contemplating a vote for the Democrats, particularly in light of the president’s response to last weeks protests of police brutality and his handling of the coronavirus crisis.

Party divisions in the GOP erupted after retired Marine General James Mattis, Trump’s former Secretary of Defense, issued a stinging public rebuke of Trump, accusing the president of ‘abuse of executive authority’ to stage a ‘bizarre photo op’ earlier in the week which saw authorities having to tear gas peaceful protesters outsider the White House.

‘Donald Trump is the first president in my lifetime who does not try to unite the American people — does not even pretend to try. Instead, he tries to divide us,’ Mattis wrote in a statement.

Powell told CNN’s Jake Tapper Sunday morning that ‘you have to agree’ with Mattis’ comments.

‘I mean, look at what he has done to divide us,’ Powell said of the president. ‘He is insulting us throughout the world. He is being offensive to our allies. He’s not taking into account what our foreign policy is and how it is being affected by his actions.’

‘I agree with all of my former colleagues,’ he said of the former and current military leaders who have denounced the president.

Senator Lisa Murkowski of Maine also broke party ranks on Thursday to say she is struggling to decide whether she can support Trump’s re-election, and backed Mattis’ critique.

Asked if she supported Trump, who faces voters in November, Murkowski said, ‘I am struggling with it. I have struggled with it for a long time.’

‘He is our duly elected president. I will continue to work with him … but I think right now as we are all struggling to find ways to express the words that need to be expressed appropriately,’ Murkowski said.

Nevertheless, there are still plenty rank-and-file Republicans whom Trump can count on their loyal support along with other big names in the GOP who seem happy to support Trump no matter what.

Top military leaders and Republicans speaking out against Trump are likely contributing to his drop in support from blue-collar non-college educated voters – a demographic that make up some of his most loyal supporters.

Eight in 10 Americans claimed in the NBC/WSJ poll that things are ‘out of control’ in the midst of George Floyd riots and the continuing coronavirus pandemic and the economic fallout that ensued.

Among all registered voters, Joe Biden has held his 7 per cent lead against the president.

The 49 per cent to 42 per cent survey results for the presidential race are unchanged from the same question posed in the April version of the poll.

Biden’s biggest advantage against Trump comes from the African American vote, where he leads the president with 82 per cent support to Trump’s 9 per cent.

Notably, the poll was conducted May 28 to June 2, which was directly in the aftermath of George Floyd’s death, which sparked nationwide outrage, leading to unrest, protests and violent riots in cities across the country.

The poll was also taken as the death toll in the U.S. from coronavirus surpassed 100,000 and millions lost their jobs.

While Trump can usually rely on blue-collar workers without a college degree to declare their unwavering support in polls, the most recent poll shows him losing ground with that demographic.

Trump is now only leading that group with about 3 percentage points, and is losing to Biden by 24 per cent among those with a degree.

In 2016, Trump only lost college graduates by 9 per cent to Hillary Clinton, and won non-degree holders by 8 points.