About That Nobel Prize: Diamond and Dybvig's Banking Theories

About That Nobel Prize: Diamond and Dybvig's Banking Theories

A lot of attention has been paid to Ben Bernanke's Nobel, but the theories of banking by Douglas Diamond and Philip Dybvig, who also won a Nobel, also need to be looked at again.

Since Ben S. Bernanke, Douglas W. Diamond, and Philip H. Dybvig won the Nobel Prize in economics, most of the media attention has been on Bernanke, which makes sense. Mark Thornton wrote a scathing attack on "Bailout Ben," while Tyler Cowen, for some reason, praised him to the skies (although Cowen does give a good overview of some of Bernanke's contributions, for what they are worth). 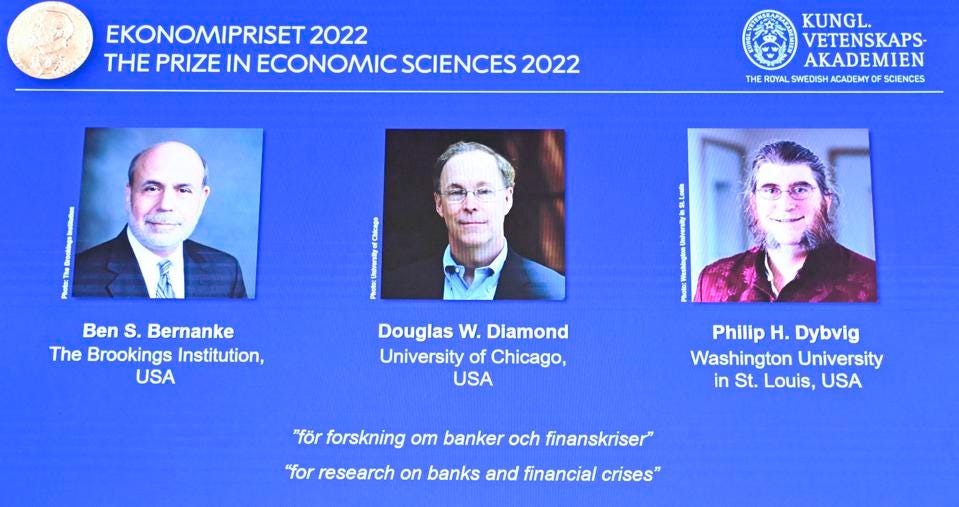 This has kept Diamond and Dybvig (DD) from getting a lot of attention, which is a shame because their work shows how bad modern economics and mainstream analyses of money and banking are even more than Bernanke's. DD may have also had a bigger impact on how economists look at banks. Their important 1983 paper, "Bank Runs, Deposit Insurance, and Liquidity," was published in the Journal of Political Economy. It has been cited over 13,000 times on Google Scholar, and that number is likely to keep going up. It has also been called "a significant conceptual and methodological advance in studying banking arrangements." Let's take a critical look at the paper that has had such an impact and is now a Nobel laureate.

DD wanted to learn about banking and, in particular, what kinds of stable equilibria a banking system would lead to and what kinds of government actions might help the market. In order to do this, they made a model, and it was a pretty strange one.

In the DD model, there is only one economic good, and the economy runs for three periods, T = 0, 1, and 2. In period 0, one unit of the good is given to each person. The good can only be used in periods 1 or 2. If it is invested in production until period 2, it will produce twice as much good, and the person can use two units.

Everyone will invest in period 0 because the good can be taken out of production and used in period 1. In the next period, everyone wakes up and finds out what their personality type is. People in type 1 have a high preference for time and want to consume right away, even if the return on investment is high. People in type 2 have a low preference for time and are willing to wait until period 2 to consume. So, people of type 1 now use their goods while people of type 2 wait.

Before talking about the DD bank, it's important to point out a strange thing about the model: there is no money here. In fact, DD says that there is no exchange at all. Ludwig von Mises said that the problems of banking are a part of the theory of money. Mainstream economists agree with this, since they all agree that banks provide liquidity. But the model that is the basis for a big part of modern banking theory leaves money out of the equation, which seems very strange.

DD now has a "bank." Instead of investing, people give their assets to the bank in exchange for a liquid claim, which means they can get their money at any time (meaning in period 1 or 2). So, the bank provides liquidity, but again, it's hard to see what the point is in an economy where exchange, and therefore the need for money and liquidity, has been explicitly ruled out.

After setting up a bank, DD went on to show that there are multiple possible equilibria: one in which all claims are met, and another called a "bank run," in which everyone sells their assets in period 1, which leads to no production in period 2. Even though banking is a good way to move money around, DD says that it is also inherently unstable and that a central bank or government-backed deposit insurance are needed to keep bank runs from happening.

Since there is no money in the DD model, there also can't be traditional banking. In the traditional English definition, a banker is a person who lends money to other people. He acts as a middleman between people who save money and people who need money. The DD "bank" doesn't do anything like that. It's just a manager of production; it's not a middleman for money. It takes in assets, runs the production process, and gives the assets back to the people who put them there when they ask for them. It can only get into trouble if it pays out assets before the end of production, and then only if it pays out more than the depositors could naturally claim in period 1. In short, to understand the model, we need to think of it as a kind of pyramid scheme.

Also, DD are thought to be a model for how banks change the maturity of their assets. In fact, this is what the Nobel Committee focused on when they described the DD model. Maturity transformation means that savers prefer to lend short-term to reduce their risks, and borrowers prefer to borrow long-term so they can invest long-term without having to pay back loans before the production processes are finished. Then, banks step in as middlemen. They get short-term loans from savers and long-term loans from businessmen. The short-term loans are then rolled over over and over. Some savers leave and others come in, but the total amount of savings that can be invested doesn't change much. DD thinks that maturity transformation is the cause of unstable banking: the government needs to step in to stop or slow down bank runs, which happen when depositors pull out their money at a faster rate than expected.

The problem for those who believe in DD and modern banking theories is that none of this is new. The problem of maturity transformation was known hundreds of years ago, and it led to the "golden rule of banking": "The date on which the bank's obligations fall due must not come before the date on which its corresponding claims can be realized," Ludwig von Mises said, quoting Karl Knies. In other words, contrary to what the Nobel-winning DD would have us believe, banking theorists have thought about maturity transformation for a long time, and they knew exactly what bankers should do about it: don't do it.

Modern economists have also thought more carefully about the issue of maturity transformation. Austrian economists Philipp Bagus and David Howden have looked at the practice of maturity mismatching—that is, not following the golden rule of banking—and argued with Randy Barnett and Walter Block about its legality and economic effects. Most importantly, these economists, unlike Diamond and Dybvig, have not mixed up the question of maturity transformation with the basic questions of banking theory.

The biggest problem with banking theory in the style of DD is that it doesn't take into account the main problem with banks and why they are so important to economic theory. This has nothing to do with changing the maturity of a loan. It's just a matter of good banking management. Banks are important to the economy because they can make more money by issuing fiduciary media, which are like money but are not backed by anything. If a theory of banking is going to be grounded in economic reality, it needs to look into why this happens and what it means. DD don't do this, and theorists who follow their lead only do so in a roundabout way. If DD's models have any value at all, it's not much in terms of economic theory.

With the 2022 Nobel, the Swedish central bank is honoring not only modern central banking, but also theories of banking that are mostly wrong. Mainstream monetary theory has become more and more disconnected from reality over the years, and Diamond and Dybvig's work is a great example of this. In their quest for elegant models, Diamond and Dybvig turn a blind eye to the real problems of banking, such as credit expansion and the creation of new money, and instead focus on banking technique issues that are only slightly related to the real problems.

This is a sign of the way economics is going in general, and monetary theory is the best place to see how different and better the Austrian school is. Since Mises's 1912 book "Theory of Money and Credit," Austrians have stressed that the most important question in banking theory is how money is made out of thin air when credit is expanded. To paraphrase F.A. Hayek, every important advance in monetary theory in the last hundred years was a step toward the consistent application of Misesian, or marginal and praxeological, principles. Unfortunately, neither the Swedes, Diamond and Dybvig, nor Bernanke know this.

More from: USAGAG
1
The cryptocurrency exchange Bitfront closes
2
FTX put your cryptocurrency in a 'crypt,' not a ...
3
The energy industry will not be fixed by subsidies
4
Twitter Is Too Musk to Fail
Filed under Douglas Diamond ,  Philip Dybvig ,  Diamond and Dybvig ,  Banking Theories

Most Popular This Week
1
The cryptocurrency exchange Bitfront closes
2
FTX put your cryptocurrency in a 'crypt,' not a ...
3
The energy industry will not be fixed by subsidies
4
Twitter Is Too Musk to Fail
5
Elon Musk criticizes Alyssa Milano for trading in her ...
6
Not Just Recession
7
How easy money led to the fall of the ...
8
How do we keep Billion-Dollar Boy-Men from hurting us?
9
About That Nobel Prize: Diamond and Dybvig's Banking Theories
10
The economy is in a mess. What will we ...