Ukraine, Russia, Cryptocurrencies, and the Politican Intersect Them

At the National Rifle Association, Donald Trump said, 'If we can send $40 billion to Ukraine, we can protect our children's schools.'

If you're still not convinced, you should look at how the sanctions function and how they effect the crypto economy.

Without breaking a beat, politicians in the United States have been pounding the drums of war to promote their own agendas. Senate Democrats, in particular, have expressed concerned about the use of cryptocurrency to circumvent sanctions. The assertion could hardly be further from the truth.

The congressmen claimed in a letter to Treasury Secretary Janet Yellen (and on social media) that "criminals, rogue nations, and other actors may exploit digital assets and alternative payment systems as a new tool to conceal cross-border transactions for nefarious objectives." In other terms, they contend that "cryptocurrencies risk weakening sanctions imposed on Russia."

Before delving into the topic at hand, it's worth noting that the letter to Yellen came just days after Treasury Department officials informed Politico,

[We] aren’t overly worried about crypto undermining the effort to choke off the Kremlin’s access to capital. Laundering large amounts of money through a dizzying array of digital wallets and exchanges is expensive, time‐​consuming and would likely be visible in the broader crypto market, given the massive investment portfolios of individuals and institutions named in the sanctions.

In fact, Cato's Matthew Feeney addressed this very topic in his article,

An oligarch who does manage to buy cryptocurrencies on an exchange with fiat could seek to throw investigators off their trail by sending their holdings to a tumbler. But these are not without significant drawbacks, and some exchanges do not allow assets that have been through tumblers to enter their platform.

In other words, if the scared oligarchs attempt this approach, they will most likely be able to accomplish little more than lose money and further isolate themselves.

With cryptocurrency and understanding the accompanying jargon, there is undoubtedly a high learning curve. But it doesn't take a full scale examination to see that cryptocurrencies are far from the "get out of jail free" card that opportunists are portraying them to be.
The Impact of Sanctions on Cryptocurrencies

If you're still not convinced, you should look at how the sanctions function and how they effect the crypto economy.

Sanctions are sometimes described as blanket bans that apply to an entire country, but the reality is a little more nuanced. Currently, sanctions have been imposed on specific Russian persons and companies, rather than on Russia's 144 million people as a whole. (While the sanctions may be limited in terms of direct targets, it is vital to emphasize that the sanctions have a broad impact on Russian residents as the economy continues to deteriorate.)

The data suggest that Russians have been flocking to buy cryptocurrencies, but it appears that this activity is more likely to be driven by millions of ordinary residents desperate to save their riches. The trade volume between the ruble and bitcoin reached a nine-month high of approximately 1.5 million rubles, as shown in the graphic below. However, that is only 13,911 dollars, indicating that a Russian millionaire is not relocating all of their money. 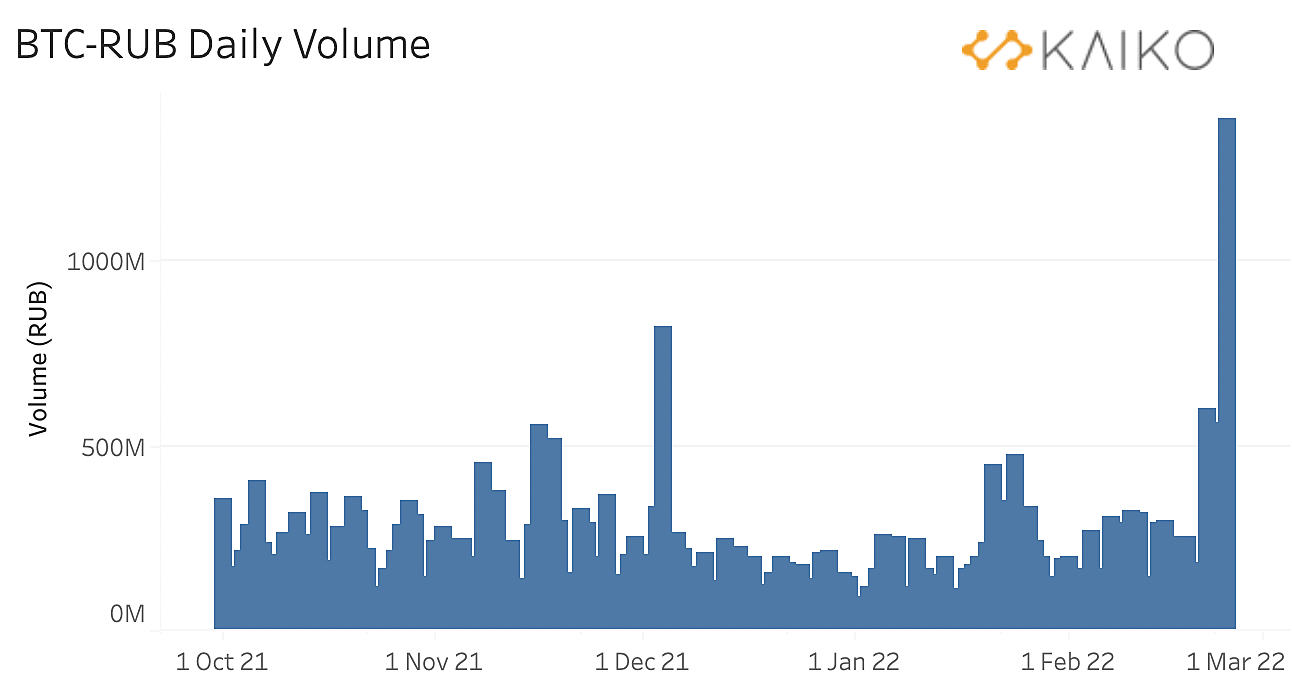 Moving from rubles to cryptocurrencies will not help the handful of specific targets sanctioned in the end. The sanctions make it illegal for US persons and businesses to conduct business with those on the sanctions list. "It doesn't matter if people spend dollars, gold, seashells, or bitcoin," Jake Chervinsky observed. It is still against the law.

Russian politicians and billionaires are welcome to experiment with cryptocurrencies, but a transparent, public record that cannot be changed is a formula for catastrophe for any criminal attempting to conceal their wealth. "We will leave no stone unturned in our efforts to investigate, arrest, and punish those whose illegal conduct enable the Russian government to prolong this unlawful war," stated US Attorney General Merrick Garland. Ordinary folks may be able to escape the sinking ruble thanks to cryptocurrencies, but those who are sanctioned will face a severe reality check if they choose to use cryptocurrencies and leave an immutable paper trail on the blockchain. Such evidence is exactly what Garland and his colleagues require.

If politicians take anything away from this war, let it be that the adoption of cryptocurrencies has resulted in a system that can simultaneously undermine the bad guys, help those in need, and raise more than $28 million for the Ukrainian government during this time of difficulty. Politicians should be praising cryptocurrency rather than demonizing it.

More from: USAGAG
1
Elon Musk said that Bill Gates has a bet ...
2
At the National Rifle Association, Donald Trump said, 'If ...
3
It's a Good Idea to Create NFT Art Museums
4
U.S. Creating Insect 'Bio-Weapons' to Cause Famines, According to ...
Filed under Ukraine ,  Russia ,  Cryptocurrencies ,  Crypto ,  Bitcoin