Officer Edward Shames, the last of WWII's 'Band of Brothers,' died at the age of 99

Col. Edward Shames, the only surviving member of the World War II parachute infantry regiment known as the 'Band of Brothers,' which was the inspiration for the HBO miniseries and book of the same name, died on Friday. He was 99 years old at the time.

Shames, of Norfolk, Virginia, died quietly at home, according to an obituary published by the Hollomon-Brown Funeral Home & Crematory.

Shames joined the Army in 1942, parachuted into Normandy, and participated in the Battle of the Bulge with the 506th Parachute Infantry Regiment of the 101st Airborne Division's "Easy Company."

Their combined efforts – and sacrifices – made in the name of freedom inspired the 2001 HBO miniseries Band of Brothers, the Virginian-Pilot reported.

The miniseries was based on Stephen Ambrose's New York Times bestseller.

Shames enlisted at the age of 19 and trained in Camp Toccoa, Georgia.

As a result of his duty, he was involved in some of World War II's most pivotal engagements.

“He made his first combat jump into Normandy on D-Day as part of Operation Overlord. He volunteered for Operation Pegasus and then fought with Easy Company in Operation Market Garden and the Battle of the Bulge in Bastogne,” according to the obituary. 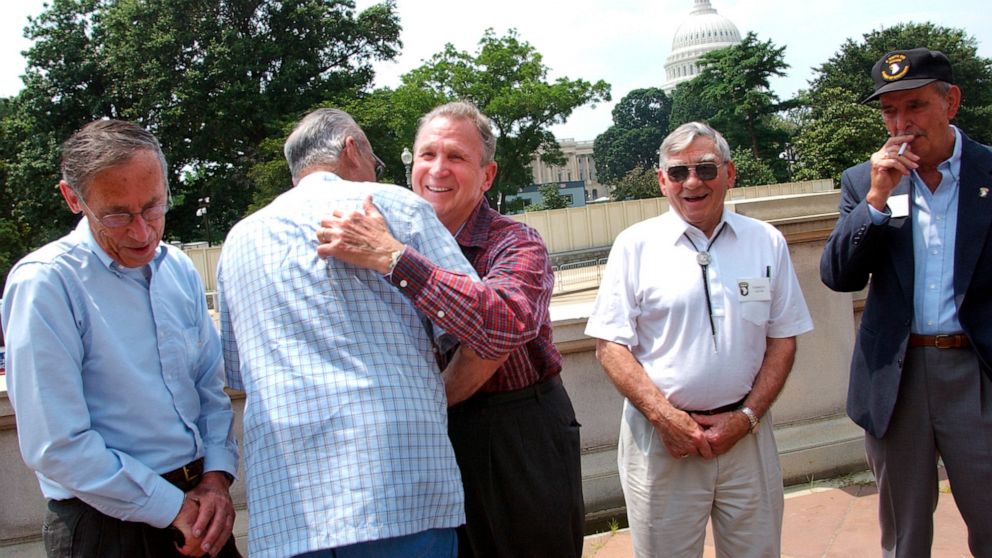 Shames was the first member of the 101st to enter Dachau concentration camp, just days after its liberation.

“When Germany surrendered, Ed and his men of Easy Company entered Hitler’s Eagle’s Nest where Ed managed to acquire a few bottles of cognac, a label indicating they were ‘for the Fuhrer’s use only.’ Later, he would use the cognac to toast his oldest son’s Bar Mitzvah,” the obituary outlined.

At the end of the war, Shames worked for the National Security Agency as a Middle East expert. He also served in the United States Army Reserve Division, where he rose to the rank of colonel before retiring.
Tom Hanks and Steven Spielberg's 2001 miniseries Band of Brothers followed Easy Company from its training in Georgia in 1942 until the conclusion of the war in 1945. Joseph May, a British actor, played Shames.

Hear shames talk about his wartime experiences below:

Shames was predeceased by his wife, Ida, who died in 2019 at the age of 73 following a 73-year marriage. Douglas and Steven, as well as four grandkids and twelve great-grandchildren, survive him.

The funeral home said that a burial service will be performed at Forest Lawn Cemetery in Norfolk, Virginia, on Sunday morning.

AP, UPI contributed to this story

More from: USAGAG
1
Facebook's doomed cryptocurrency effort is almost certainly coming to ...
2
Defending Taiwan is an admirable objective. But are we ...
3
Is China intending to poison international competitors during the ...
4
China secretly purchased a stake in an Italian drone ...
Filed under Band of Brothers ,  Edward Shames ,  WWII