Supportive sisters! The Rinna-Hamlin household has made it crystal-clear they support Amelia Gray Hamlin after her breakup from Scott Disick, and sister Delilah Belle Hamlin took it up a notch.

Amelia, 20, shared an Instagram gallery of photos on Friday, October 29, captioning it, “the devil wears @alo.” In the photos, Amelia lounged on a cozy black blanket on the floor, surrounded by open fashion magazines.

Her older sister, 23, for her part, jokingly commented on the social media upload, “Way better than the photos talentless took,” which seemingly referenced the name of Amelia’s ex-boyfriend’s clothing line. 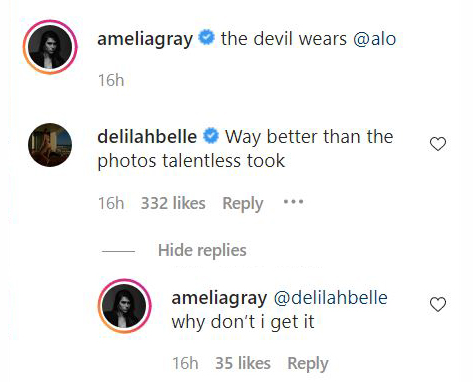 However, Amelia seemingly wasn’t on board with the subtle dig as she replied, “@delilahbelle why don’t i get it.”

Nearly one week earlier, Amelia opened up about feeling great amid the recent breakup from the 38-year-old Keeping Up With the Kardashians alum, writing, “Rly rly happy,” via a Sunday, October 24, Instagram gallery, alongside snaps of the California native smiling, eating pancakes and jokingly flipping off the camera.

Us Weekly previously broke the news that the pair had split after less than one year of dating in September.

“Amelia was the one who ended things,” an insider told Us at the time, noting the split “wasn’t related to the messages Scott sent about Kourtney. This breakup was coming regardless.”

Amelia and Delilah’s mother, Lisa Rinna, further opened up about the nature of the pair’s breakup during the second part of the Real Housewives of Beverly Hills season 11 reunion episode.

“She made [the decision] on her own,” the Rinna Beauty founder, 58, told Andy Cohen at the time. “There’s never one reason why I think people split up, you know. Now’s the time to heal, now’s the time for everyone to heal.”

The Melrose Place alum, for her part, has been vocal over her disapproval of the exes’ former relationship with a source telling Us that their eventual split “had a lot to do with how her mom felt about him — she was never a fan.” Rinna even publicly wished her daughter was dating former One Direction singer Harry Styles instead of the Flip It Like Disick alum with several pro-Harry Instagram uploads.

“Why can’t it be Harry Styles? Why the f–k is it Scott Disick?” the Bravo personality joked during the August 25 episode of RHOBH. “My husband, Harry [Hamlin], made it quite clear that he would not object if Delilah and Eyal [Booker, her boyfriend] got married, which is pretty shocking, but that says a lot. I can’t say the same for Amelia at this point now.”

Days before the pair called it quits, they sparked breakup speculation after Amelia posted cryptic messages via Instagram. After their split, Serena Kerrigan opened up about how Amelia was coping post-split.

“We talked about Scott, yeah. It’s fresh. It’s hard,” the Siesta Key alum, 27, exclusively told Us on September 12 of her friend. “I was like, ‘You’re super young and super hot and have the whole world at your fingertips, like, you’re fine.’ She was like, ‘You’re right.’”

This story originally appeared on: US Magazine - Author:Miranda Siwak