Don’t knock her crown. Shanna Moakler fired back at an Instagram troll who claimed her kids will become part of reality TV “royalty” following Travis Barker‘s engagement to Kourtney Kardashian.

The 46-year-old model shared a glamorous Instagram photo on Thursday, October 21, referencing the 1939 film Gone With the Wind. “Frankly, my dear, I don’t give a damn,” she wrote in the caption alongside an anchor emoji.

When one user teased in the comments, “How does it feel [that] your children will be in Hollywood Royalty now. Kardashians run LA,” Moakler didn’t hesitate to put her foot down.

“I’m their mother, they were royalty long before…” she replied. In a separate comment, she wrote, “I love that people are now telling me how I feel! lol I can’t with this world.” 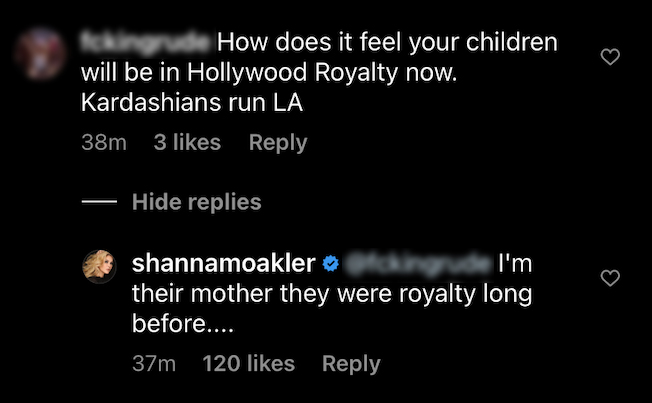 The Rhode Island native wasn’t the only one defending herself. One of her followers chimed in with a supportive message in response to the troll’s comment, noting, “You act like @shannamoakler @travisbarker didn’t have a Reality show about their family long before the Kardashians? If you are so into ‘Pop news’ it’s pretty disgraceful that you don’t know these facts! 🤷🏻‍♀️😘 #meetthebarkers.”

Moakler dropped a “like” on the dig. She and Barker, 45, were featured on their own MTV series for two seasons from 2005 to 2006. The show centered on their lives at home raising their two kids — Landon, now 18, and Alabama, now 15 — while the Blink-182 drummer was at the height of his popularity. (Moakler is also the mother of daughter Atiana, 22, from her past relationship with Oscar De La Hoya.)

The Pacific Blue alum was married to the musician from 2004 to 2008. In January, Us Weekly confirmed that Barker sparked a romance with the Poosh founder, 42, after years of close friendship. They got engaged on Sunday, October 17, in a romantic moment that was filmed for the Kardashian-Jenner family’s upcoming Hulu series.

“It’s going to look amazing,” a source exclusively revealed to Us of the proposal. “Travis spent forever getting the details right.”

Shortly after the pair’s relationship milestone broke the internet, fans were convinced Moakler gave her two cents on the engagement by sharing a series of cryptic quotes via her Instagram Story.

“Temporarily closed for spiritual maintenance,” one passage read on Sunday, while another was attributed to the late Tupac Shakur: “Before you ask why someone hates you, ask yourself why you give a f–k.”

Moakler has since denied that the posts had anything to do with her ex-husband moving on. While she might not be Barker and Kardashian’s biggest fan, her kids celebrated their father’s big moment. “Love u guys,” Alabama commented on the California native’s Instagram reveal on Sunday.

Her older brother, for his part, captioned a video of the newly engaged pair locking lips, “So happy for me and my new family.”

Moakler’s relationship with her children has been through the wringer. Earlier this year, she told Us that she wasn’t “bothered” by Barker and Kardashian’s highly publicized romance — apart from how it affected her kids.

“I don’t have any feelings toward either one of them, like, I’m not jealous of [Travis and Kourtney],” she said in May. “I don’t think about them. If they want to run off into the sunset, like, by all means, but you know, don’t alienate my children in the process.”