Paulina Porizkova, who has been very open about ageism in the modeling world, posed in nothing but a sheer bodysuit for the cover of ‘Vogue’ Czechoslovakia — pics 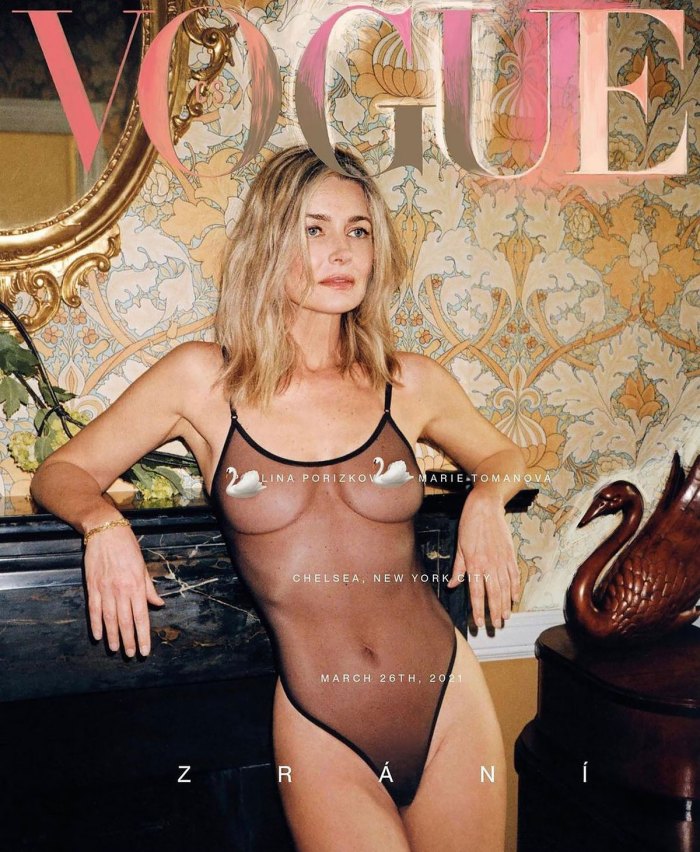 Consider Us speechless! Paulina Porizkova is wearing nothing (and we mean nothing) but a sheer black bodysuit on the May 2021 cover of Vogue Czechoslovakia — and to say she looks amazing is simply an understatement.

The 56-year-old model, who has spoken out in recent weeks about everything from ageism in the modeling industry and embracing her sexuality to cosmetic procedures, posed for the photo shoot at her home in Chelsea, New York.

With loose waves in her hair, abs on full display and swans perfectly photoshopped on top of her exposed nipples, Porizkova looks every bit the supermodel.

“Exactly 40 years after my very first (German) Vogue cover at the age of sixteen, here is a new one. Full frontal nude, at 56, on Vogue CZ. I’d really like to thank the brave folks at Vogue CZ (editor-in-chief @andreabehounkova and creative director @kralicek) for daring to do this – but most of all the incredible team behind this photo shoot,” she captioned the photo.

“I can’t wait to share the inside pages as well, this was one of the most fun and playful photos shoots I have done — possibly in my life. For you peeps who have a problem with the lack of coverup — you can peruse the pages fully dressed,” she continued, adding #betweenjloandbettywhite #sexyhasnoexpirationdate #40yearslater.

Her post attracted rounds of applause from famous friends in just under an hour, with Lisa Rinna dropping a series of clapping emojis, Elle Macpherson writing, “Love,” and Miss J Alexander chiming in with a resounding, “Yeeeeeeeeeeeeeeeeeessssssssss.”

Others were made sure to call out Porizkova’s confidence. For example, Amanda Caroline Cronin wrote, “Celebrating women over 50 always a great idea bravo for getting almost naked and showing how fabulous you can be in mid life !!! Breaking molds & stereo types championing & pioneering, guiding & inspiring !!! Love it, pure class.”

While Porizkova went “full frontal naked” for her most recent cover, it’s not the first time the model has stripped down for a picture. In 2021, she’s posted a handful of lingerie-clad photos to Instagram.

That said, the model has received a fair amount of “backlash” in response to her risqué posts. “In my 20s, I was celebrated for showing up in lingerie. I was getting a lot of money for it and everybody loved me,” Porizkova said during the April 2, episode of The Tamron Hall Show.

She continued: “In my 50s, I still think I look pretty good in lingerie, but the reaction is reviled, obviously not by everybody … there’s a fair amount of backlash.”

This story originally appeared on: US Magazine - Author:Samantha Holender