The Weeknd, Justin Bieber and Nicki Minaj Slam Grammys for Being ‘Corrupt’

TV Shows That Ended Due to COVID-19: ‘Stumptown' and More

Bringing joy. Queen Elizabeth II penned a heartfelt letter to this year’s Maundy Gift recipients after the mass in their honor was canceled amid the coronavirus pandemic.

Each year on Maundy Thursday, the Thursday before Easter Sunday, the queen, 94, distributes specially minted coins in order to recognize certain people’s outstanding Christian service. The coins are handed out in a red-and-white purse in a tradition that dates back to 600 A.D.

“I am delighted to send you the Maundy Gift which I hope you will accept as an expression of my personal thanks to you for all that you have done to enrich the life of your community,” Her Majesty wrote in the note sent to 190 recipients alongside their coin gifts on Thursday, April 1.

The Monarch then touched upon the spiritual significance of the honor and the Christian religion.

“On the night before he died, Jesus washed the feet of his Disciples. This was something usually done for guests by a servant of the household,” she wrote. “By taking the part of a servant, Jesus set an example to the Disciples and to those who, down through the ages, would try to follow him. He showed us that service for others is at the heart of what it means to be a Christian.”

This year, each honoree’s gifts commemorated the queen’s upcoming 95th birthday in addition to the 50th anniversary of Decimal Day, the day on which the U.K. and Ireland decimalized its currency. Although the in-person service couldn’t take place amid the ongoing health crisis, the queen didn’t let it take away from the moment.

“Each year, at the Royal Maundy Service, we have an opportunity to recognize, and give thanks for, work done by countless people for the well-being of their neighbors; work that has often been taken for granted or hidden,” she continued, noting the recipients would have been honored at Westminster Abbey. “I am sure you will be sad, as I am, that present circumstances make it impossible for that service to take place. I hope however that this Maundy Gift will remind you for years to come that your efforts have been truly appreciated.” 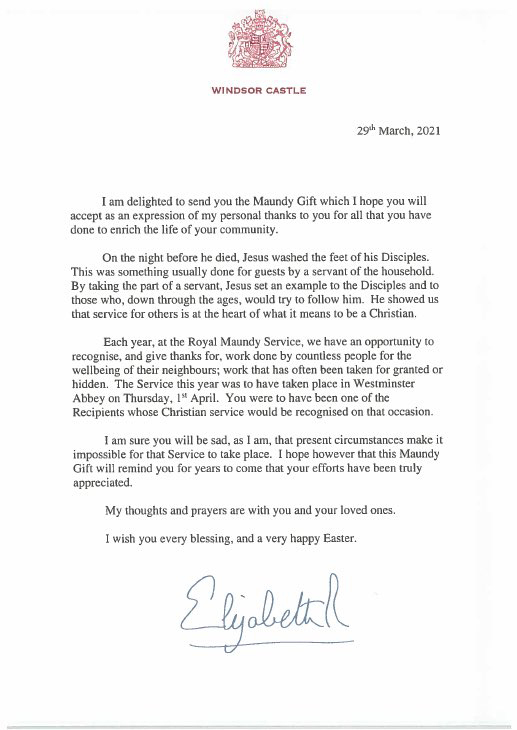 The letter concluded: “My thoughts and prayers are with you and your loved ones. I wish you every blessing, and a very happy Easter.” The queen’s sweet note was shared with the public on the royal family’s social media pages on Thursday, alongside photos of the gift and traditional service that correlates with the honor.

One day prior, the reigning monarch made her first public appearance of the year at the Royal Australian Air Force Memorial amid pandemic restrictions.

Last month, Elizabeth’s husband, Prince Philip, returned home from the hospital after a 28-day stay and undergoing heart surgery after being admitted as a “precautionary measure” in February.

During his hospital stay, the royal family came under fire when Prince Harry and his wife, Meghan Markle, accused The Firm of racism toward the former Suits actress and their 22-month-old son, Archie, while they were living in the U.K.

The couple spoke out against the family and the U.K. press during an explosive CBS tell-all interview in March. A source exclusively told Us last month that the queen has “barely had any time to herself” since the interview aired, explaining that she has been in “constant crisis meetings.”

The insider added: “She’s trying to be understanding and see things from Harry’s perspective, but the allegations he and Meghan have made are hard for her to digest. The interview has wreaked havoc on the royal family.”

Listen to the Royally Us podcast for everything you want to know about our favorite family across the pond.

This story originally appeared on: US Magazine - Author:Johnni Macke