Why do we deprive students of the historical and cultural context of science?


We've all heard this before, and many of us have experienced it firsthand: Science class is boring. It's too hard. It's not fun. It's all about memorizing a bunch of formulas. The teacher is too tough. Homework is stupid and pointless. The list goes on. Of course, there are spectacular exceptions, truly motivating and inspiring science teachers across the world. One or two of these mentors were essential to many of us who became professional scientists. What do they have that other teachers don't? What makes a good science teacher? There is pedagogy, of course. How you present the material, how you relate to your students. But first and foremost, it is passion that makes a science teacher stand out, or any teacher for that matter. Passion for the subject matter, passion for teaching, passion for making a difference and becoming someone unique in the lives of the many young people the teacher meets in the classroom. A successful teacher never steps outside of his own humanity as he steps into the classroom. Quite the opposite, the act of teaching should be a celebration of our shared humanity, of our mission to pass on knowledge from generation to generation so as to keep the appetite for discovery and invention burning.

...the act of teaching should be a celebration of our shared humanity, of our mission to pass on knowledge from generation to generation so as to keep the appetite for discovery and invention burning.

There is a side to science teaching that is formulaic; there is material that needs to be covered, facts that must be introduced, there is repetition, there is frustration. No profession is different. Like in acting, however, it is the delivery that makes the difference. You can explain Newton's laws of motion by simply writing them on the blackboard (or the whiteboard or a tablet that is projected onto a big screen) and working through a few examples. This is done across the world in thousands of classrooms every day. But if this is all you do when teaching Newton's laws, you are leaving out the best part of the story, the story itself. Who was Isaac Newton? Why was he thinking about the laws of motion and gravity in his early twenties? What was going on in Europe in the mid 1600s? Was science at war with religion after Galileo's affair with the Vatican? Where was Newton when he came up with his first insights into a formulation of mechanics that would change the world forever? (Answer: hiding from a plague pandemic in his mother's farm.) What inspired him? Was he just a hardened rationalist who only cared about describing the world through formulas? (Answer: absolutely not! Yes, Newton was a weirdo, socially detached, quiet, and probably died a virgin. Still, he was far from a cold machine, only interested in calculations. What moved him was a deep religiosity, a conviction that the rationality of the world reflected God's rationality and that the task of the natural philosopher was to unveil the cosmic blueprint so as to understand better the "mind of God.") To Newton, the practice of science was an act of religious devotion.

Why deprive students of this humanistic side of science? The usual excuse is time, as in "we don't have enough time to cover the material and delve into such stories." Nonsense. I've been teaching physics courses for over 30 years at all different levels, from non-science majors to quantum field theory to graduate students, and I can guarantee that there is always time when there is the will.

The true reason why the overwhelming majority of science classes excludes the humanistic aspects inherent in the practice of science is that most scientists don't know any of this story. And they don't know it because these topics are not part of their scientific education. Those who do know, look for this knowledge largely on their own. A typical scientific education doesn't include the historical and cultural context from which the science emerged, or the spiritual and religious inspiration behind the thoughts of many of the "heroes" of science, from Johannes Kepler and Newton to James Clerk Maxwell, Michael Faraday, Charles Darwin, and Albert Einstein. And if they do know, they've been trained not to mention it. "Don't mention philosophy; don't mention history of science, and surely don't mention religion in a science class." 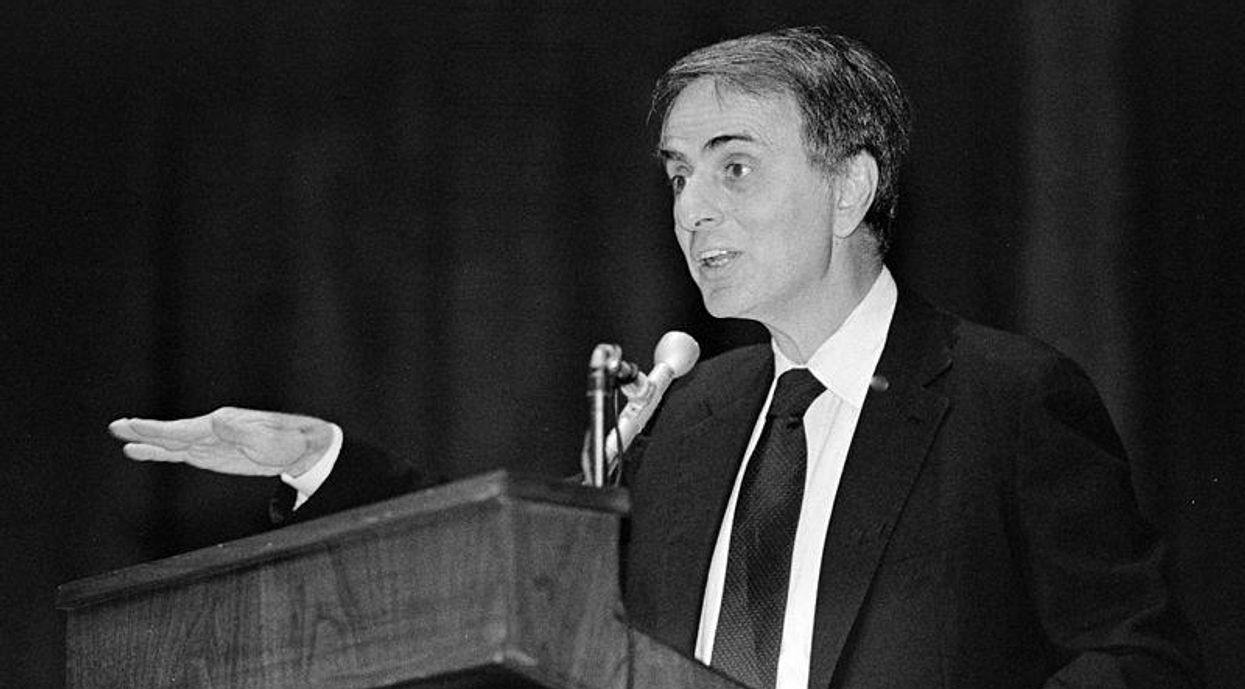 Carl Sagan, one the most loved science teachers and communicators, speaks at Cornell University circa 1987.

Over the past two centuries, and largely influenced by the profound and immediate impact of technological applications of scientific thinking in industry and society, the teaching of science was mostly reduced to the instruction of technicians, a specialized guild focused on very specific tasks. We became incredibly efficient at handling abstruse mathematics and computer programming, of modeling specific systems and handling laboratory demands within narrow subdisciplines: plasma physics, condensed-matter physics, high-energy physics, astrophysics, and so on. The walls erected between the sciences and the humanities after the Enlightenment have multiplied into walls erected between the countless subdisciplines within each scientific field, from physics and chemistry to biology and computer science. Reductionism took over education and we lost sight of the whole.

True, the vast amount of knowledge accumulated over the centuries, and that continues to grow at an unrelenting pace in all scientific fields, unavoidably precludes anyone from having a global understanding of a whole subject, be it astronomy or cognitive psychology. That is not what worries me, as I am, as are all my colleagues, one of the specialists. What does worry me is the enormous distancing between a scientific education and a humanistic approach to knowledge. From teaching Dartmouth's Physics for Poets for most of my career, I have witnessed the excitement of nonscience majors when they understand not the formulas of physics but the ideas of physics, the historical context from which they emerged, their philosophical and religious implications, the humanity of science itself, as an expression of our human need to make sense of who we are and of the world in which we live. (For those curious, I created a similar online course free and open to the public, Question Reality! Science, Philosophy, and the Search for Meaning )

As students learn about changing worldviews, about the importance of observational rigor and methodological discipline, of the devotion and passion that feeds the search for knowledge and the fundamental relevance of science education in our times, they reconnect with a science they had deemed unwieldy and grow as thinkers and citizens. The challenges we face in the modern world call for an engagement of the sciences and the humanities that starts in the classroom and becomes an essential conversation in the public sphere.