Scientists achieved the most stable transmission of a laser signal through the atmosphere ever made, beating a world record. The team managed to send laser signals from one point to another while avoiding interference from the atmosphere. Their very precise method can allow for unprecedented comparisons of the flow of time in separate locations. This can enable scientists to carry out new tests of Einstein's celebrated theory of general relativity, and have wide applications across different fields.

For the record transmission, the researchers combined phase stabilization technology with advanced self-guiding optical terminals. They used two identical phase stabilization systems, which had their transmitters located in one building while receivers were in another. One system used optical terminals to send the optical signal over a 265 m free-space path between the buildings. Another system transmitted using a 715 m-long optical fiber cable, essentially to keep tabs on the performance of the free-space link.. The terminals were outfitted with mirrors to prevent interference like phase noise and beam wander.

The study's lead author Benjamin Dix-Matthews, a Ph.D. student at ICRAR and UWA, highlighted the innovation and potential of their technique. "We can correct for atmospheric turbulence in 3-D, that is, left-right, up-down and, critically, along the line of flight," said Dix-Matthews in a press release. "It's as if the moving atmosphere has been removed and doesn't exist. It allows us to send highly stable laser signals through the atmosphere while retaining the quality of the original signal." 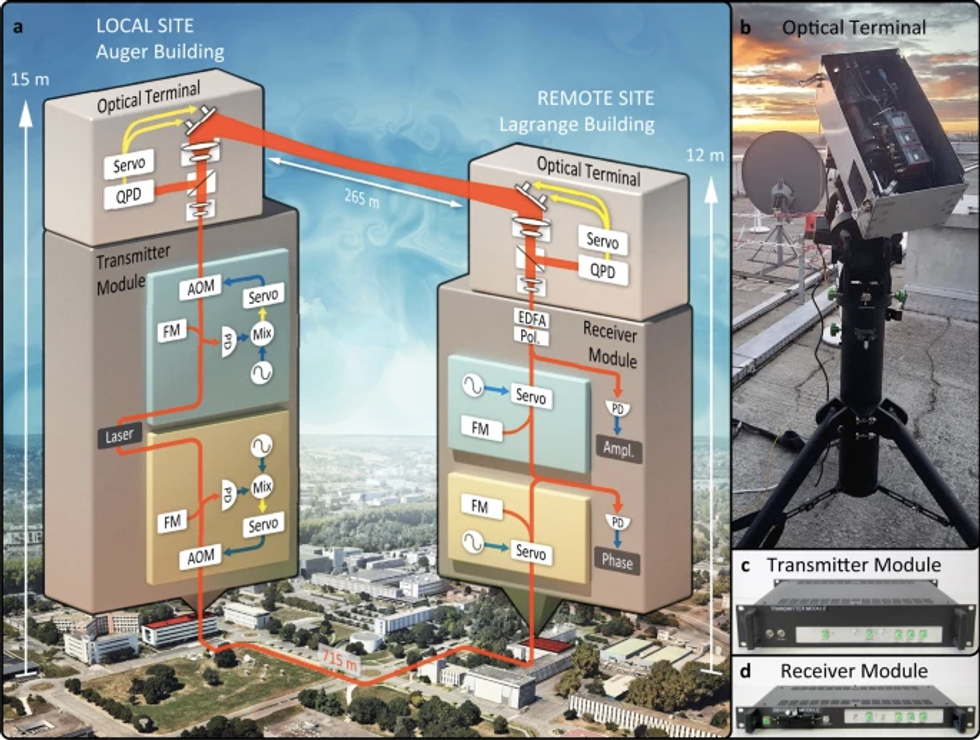 Block diagram of the experimental link that shows two identical phase stabilization systems on the CNES campus. Both of the systems have their transmitter in the Auger building (local site), and both receivers are located in the Lagrange building (remote site). One transmits the optical signal over a 265 m free-space path in-between the buildings while utilizing tip-tilt active optics terminals. The other transmits using 715 m of optical fiber.

Dr. Sascha Schediwy, ICRAR-UWA senior researcher, envisioned numerous applications for their technology, whose precise performance beats even the best optical atomic clocks. Putting one of these optical terminals on the ground while another one is on a satellite in space would help the exploration of fundamental physics, according to Schediwy. Other applications could extend to testing Einstein's theories with greater precision as well as understanding the time-related changes of fundamental physical constants and making advanced measurements in earth science and geophysics.

Optical communications, a field that that utilizes light for sending information, could also benefit. The new tech can improve its data rates by "orders of magnitude," thinks Dr. Schediwy. "The next generation of big data-gathering satellites would be able to get critical information to the ground faster," he added.

Check out the new study in Nature Communications.