A supernova exploded near Earth about 2.5 million years ago, possibly causing an extinction event.

If you wanted some more shattering news, we now know that a supernova exploded very close to Earth about 2.5 million years ago. That might sound like a long time ago, but in the life of our 4.5 billion-year-old planet, that's just yesterday.

Supernovas are amazingly bright explosions of stars at the end of their lives. A recent study found a blast 4.5 million light-years away could release as much as 10 times the amount of energy that a sun can emit in its lifetime. It also spreads a tremendous amount of chemicals all throughout the cosmos. Just-released research looked at such a spread and found that concentrations of particular elements point to a supernova near Earth just 2.5 million years ago.

The scientists found an unusual amount of 53Mn, a radioisotope made by supernovas. Previous studies looked for such traces in concentrations of 60Fe, an isotope of iron.

The scientists, led by Dr. Gunther Korschinek from the Technical University of Munich, focused their study on ferromanganese crusts. These marine sediments, composed mainly of iron and manganese oxides, grow in time and jut out from the water. This makes them great record-keepers of chemicals in the water around them. While examining these ferromanganese crusts from locations in the Pacific Ocean, the team found not only the isotope 60Fe, but also 53Mn. The samples came from 1,589 meters (5,213 feet) down to 5,120 meters (3.18 miles) down.

What does the presence of 60Fe tell the researchers? It's half-life of 2.6 million years indicates that it was created in a nearby supernova explosion in relatively recently times. Otherwise, 60Fe would have decayed into nickel.

One other explanation for the presence of the isotope is its possible creation in the death throes of asymptotic giant branch (AGB) stars. But the presence of 53Mn, which cannot be produced by such stars, clearly points to supernovae as the origin, think the scientists. 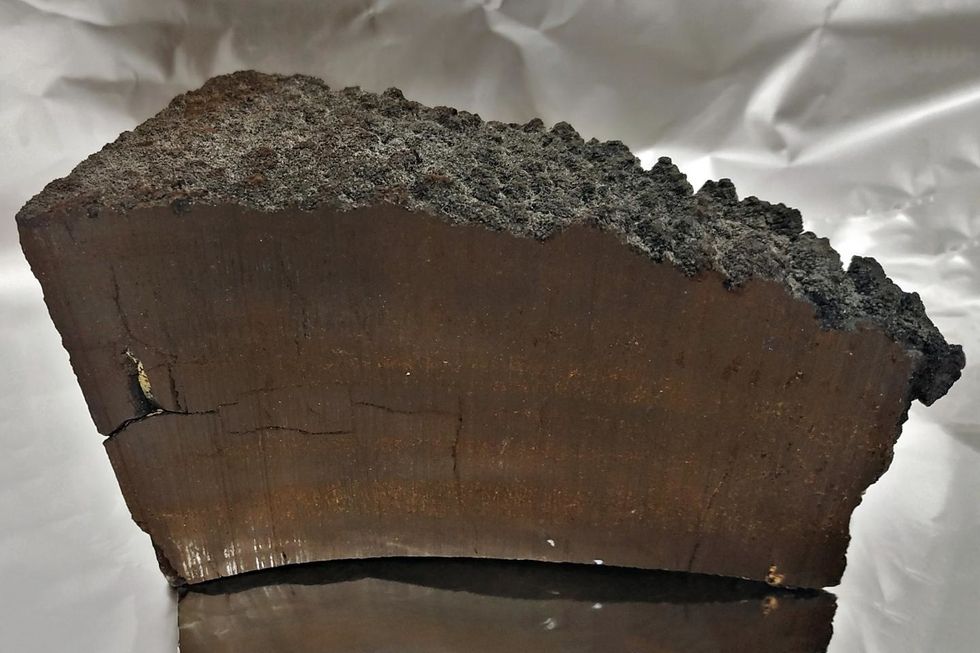 This Manganese crust started to form about 20 million years ago. Growing layer by layer, it resulted in minerals precipitated out of seawater. The presence of elevated concentrations of 60 Fe and 56 Mn in layers from 2.5 million years ago hints at a nearby supernova explosion around that time.

"The increased concentrations of manganese-53 can be taken as the 'smoking gun' – the ultimate proof that this supernova really did take place," shared Dr. Korschinek in a press release.

The researchers used accelerator mass spectrometry to locate the 53Mn atoms in the crust that looks like hardened chocolate cake.

"This is investigative ultra-trace analysis," said Korschinek. "We are talking about merely a few atoms here." He explained further that the technique is also very useful in figuring out the sizes of the original stars, adding "accelerator mass spectrometry is so sensitive that it even allows us to calculate from our measurements that the star that exploded must have had around 11 to 25 times the size of the sun."

If there was a supernova in Earth's relatively recent history, what effect did it have on the planet? The scientists think it likely caused cosmic ray showers and affected the climate. It might have also caused a partial extinction event – the Pliocene marine megafauna extinction

Check out the study "Supernova-Produced 53Mn on Earth" in the journal Physical Review Letters.