Beam me up? The paradoxes and potential of human teleportation

Why we have breakup sex, according to psychology

Self-indifference: You're just not that big a deal — and that's a good thing

Beam me up? The paradoxes and potential of human teleportation

How close are we to teleporting humans over distances? This staple of science fiction assumes the eventual existence of technical wizardry, whereby humans are scanned, disassembled, and then immediately reassembled particle by particle in a completely different location. An easy, hassle-free way to travel, assuming some crucial parts of you are not lost in the process.

Researchers have been making headway on making this happen, but on a very small scale, achieving successes in teleporting photons (particles of light) as well as atoms like cesium and rubidium. But how ready are we to get humans beamed up?

First of all, let's get one big philosophical issue with teleportation out of the way. What does it really mean to teleport someone? Let's say you're successful building a device that can achieve sending a person from one location to another. But when that human being arrives at the second location, is that actually the same person? Wouldn't the person being teleported first have to be destroyed, atom by atom, and then a copy of him or her would re-created at the destination? As such, does teleportation necessitate what is essentially a murder on one end and rebirth of sorts on the other?

And that second person, even if they have all the exact same atoms and thoughts as the person they were before teleportation, are they really exactly the same or maybe more accurately – a clone of their former self? And if teleportation forces us to make clones of ourselves (potentially countless), then what does that really mean for the original human? They would essentially not exist after starting to use this technology. As theoretical physicist Michio Kaku said on this topic, if "you just saw the original die and if you believe in a soul that soul went to heaven or maybe the other place, but that person is dead, so who is this imposter over there?"

Michio Kaku: The Metaphysics of Teleportation

Of course, this conundrum describes one way of teleporting. While raising such great objections, Kaku actually thinks we will be able to overcome them within the next 100 years and potentially make human teleportation possible. So far, scientists have been able to mainly achieve quantum teleportation. This kind of teleportation concerns the very small and is about transferring informational properties between particles rather than actual matter. This technology can lead to uses like creation of the quantum internet – a next-generation internet with blazing speeds and tremendous accuracy and security.

In a late 2020 development, scientists were able to for the first time teleport quantum information over a fiber optic network of 27 miles, at the accuracy of 90%. The information shared was in the form of photon qubits – two-state systems that are basic units of quantum information. They are shared across long distances via quantum entanglement, which links two or more particles to each other. Even if they are far apart, the encoded information in a pair of entangled particles gets teleported.

One of the paper's co-authors, Fermilab scientist Panagiotis Spentzouris, who heads the Fermilab quantum science program, explained the significance of the accomplishment.

"We're thrilled by these results," said Spentzouris. "This is a key achievement on the way to building a technology that will redefine how we conduct global communication." 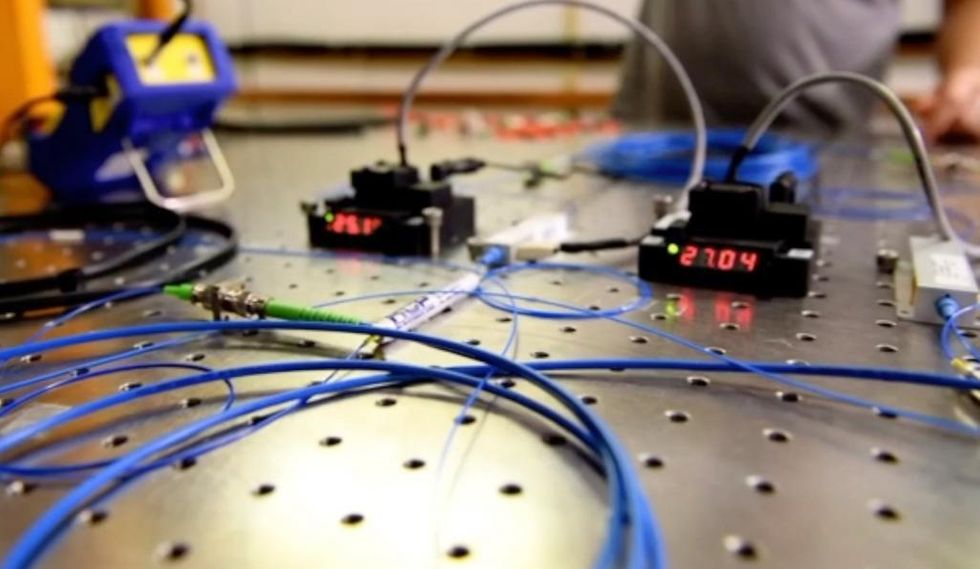 High-fidelity quantum teleportation at the Fermilab Quantum Network was achieved by connecting fiber-optic cables to off-the-shelf devices (displayed above), as well as state-of-the-art R&D devices.

Prior to this achievement, successful teleportation experiments included the 2019 attempt by Japanese researchers to send information within the lattices of a diamond. They managed to use a nitrogen nano magnet to transfer the polarization state of a photon to a carbon atom, essentially teleporting it.

In another long-distance feat, in 2017, Chinese scientists were able to teleport photons to a satellite over 500km above. For this experiment, they created an entangled pair of photons on the ground, then beamed one of paired photons up to the satellite while the other one stayed on the ground. To make sure they were still entangled, the researchers measured both photons. While millions of photons were sent that way, positive results were achieved in 911 cases, underscoring the fact that we'd certainly want a better success ratio when it comes to teleporting humans.

In fact, a fun 2013 study by physics students at the University of Leicester came up with useful numbers to show how complex it would be to teleport a person, even if we approached it as sending information that is used to re-create the person elsewhere. They reasoned that the transferable data for a human would consist of the DNA pairs that make up genomes in each cell. As such, the total data for each human cell would be approximately 1010 bits (b), while the data for a full human would come in at about 2.6 x 1042 b. Sending this gigantic amount of data would need the kind of computing technology we didn't invent yet. By 2013 tech standards the students used, transferring data for just one human (at the bandwidth of 29.5 to 30 GHz) would take up to 4.85x1015years, much longer than the age of the universe.

Certainly, better technology and new approaches are necessary for human teleportation to ever become a reality. If you're hopeful it may one day happen, you're not alone. Professor Ronald Hanson from Delft University of Technology in the Netherlands said this in an interview, upon completing a successful quantum teleportation experiment in 2014:

"If you believe we are nothing more than a collection of atoms strung together in a particular way, then in principle it should be possible to teleport ourselves from one place to another," shared Hanson. "In practice it's extremely unlikely, but to say it can never work is very dangerous. I would not rule it out because there's no fundamental law of physics preventing it. If it ever does happen it will be far in the future."

How far that feature will be is up for debate. For reference, "Star Trek," the show that made teleportation famous, was set between the 22nd and 24th centuries. Let's see if our imagination can catch up to reality.

The Trouble with Transporters