Aphantasia: the rare brain condition that darkens the mind’s eye

A new study provides validation for the recently identified phenomenon.

Escapism is one of the imagination's great joys. Through fantastic literature, we can explore the vast stretches Arrakis's deserts or the forests of Middle Earth alongside Gandalf the Grey. We can embark on vacations weeks in advance and enjoy a sunny beach while at our desks. We can relive a cherished memory with a favorite relative in an instant, and, of course, always rely on our flock of trusty sheep to lull us to sleep.

We manage this through what is colloquially called "the mind's eye," our ability to generate psychological images without sensory input. However, such escapism is not possible for people with the rare, and only recently identified, condition aphantasia. People with aphantasia cannot conjure mental images—original or from memory. Instead, their minds' eyes produce dark, blank canvases that cannot be painted in. As Wilma Bainbridge, an assistant professor of psychology at the University of Chicago, told UChicago News:

"Some individuals with aphantasia have reported that they don't understand what it means to 'count sheep' before going to bed. They thought it was merely an expression, and had never realized until adulthood that other people could actually visualize sheep without seeing them."

For such individuals, literature may produce facts but not visual representations. Arrakis isn't a planet of vast deserts but vast emptiness, Gandalf the Grey a colorless, featureless blob. Sunny beaches can't be visited in their imaginations but must remain on the office calendar until summer vacation. And while memories exist, they cannot be visually recalled except between scrapbook cellophane.

Scientists don't yet know what causes aphantasia, whether it's a distinct psychological condition, or, indeed, if we are simply jarring against language's limited ability to accurately describe our internal realities. But a burgeoning body of research—among it a new study led by Bainbridge and published in Cortex last month—suggests the condition is more than misfiring expressions.

Changing our understanding of the mind's eye 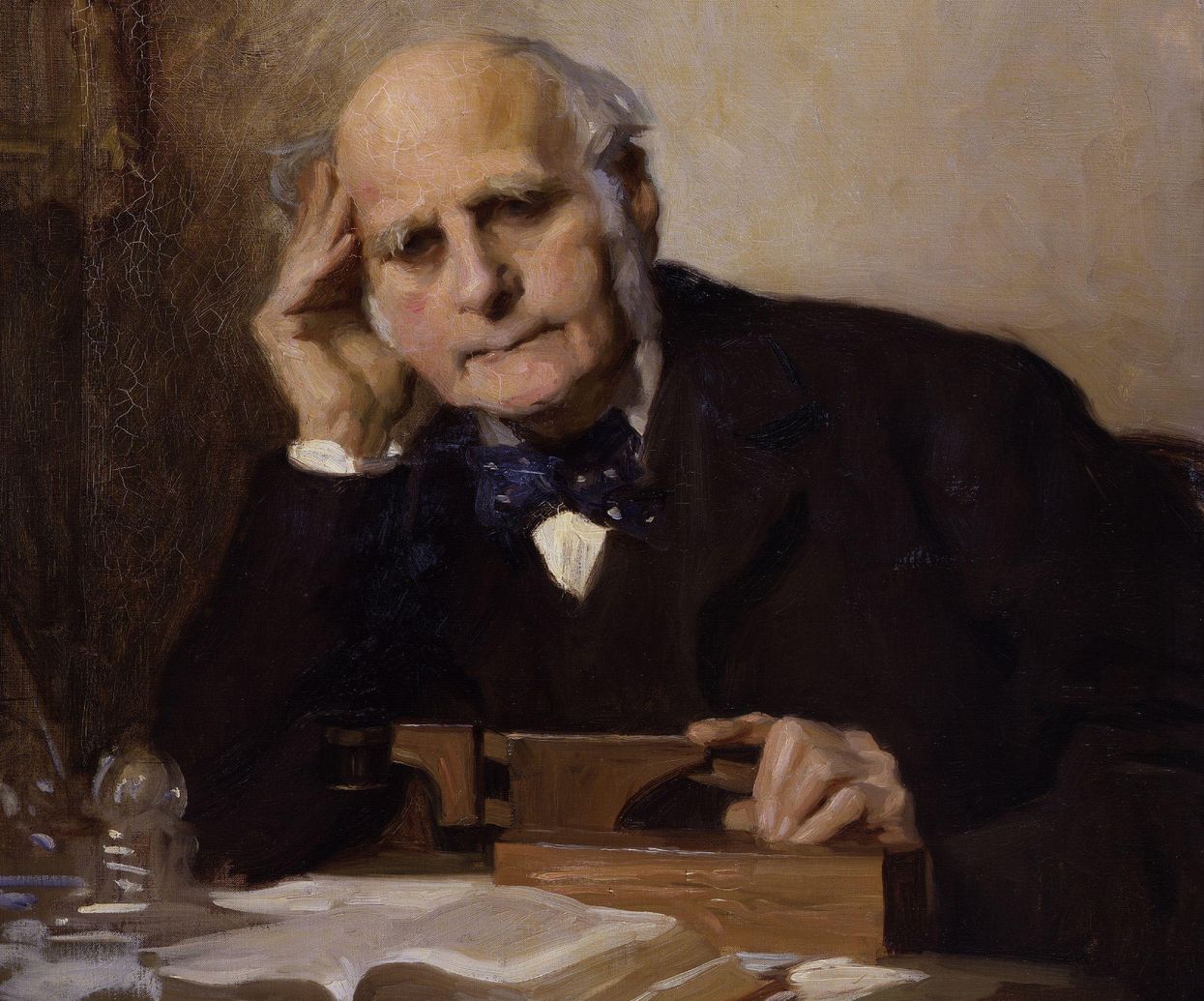 Francis Galton was the first to describe a condition that would today be recognized as aphantasia.

Though no long-term studies have focused on aphantasia, its history stretches back more than a century. Francis Galton first described people with "no power of visualising" in 1880, an observation made during his breakfast-table survey. At that time, however, the science of psychology was still in its infancy, and Galton's observation was shelved like so many other early-day curios—brought down and dusted off by the occasional psychologist but given little attention before being shelved again.

That changed in 2003 when neurologist Adam Zeman was contacted by a 65-year-old man who claimed his mind's eye went blind. During a coronary angioplasty, the man suffered a small stroke that damaged his brain. Afterward, he lost his ability to render psychological imagery.

"He had vivid imagery previously," Zeman told Science Focus. "He used to get himself to sleep by imagining friends and family. Following the cardiac procedure, he couldn't visualise anything, his dreams became avisual, [and] he said that reading was different because previously he used to enter a visual world and that no longer happened. We were intrigued."

Zeman and his colleagues began a case study into the man's condition. Tests found he could describe objects and their color but could not visualize them. (He claimed he simply knew the answer.) He could rotate three-dimensional images in his mind, but it took him longer to manage than controls. And brain imaging showed brain regions associated with visualization to be dark when he tried to imagine images.

Zeman published his case study, and it was subsequently featured in Discover magazine. After the story's publication, more people reached out to Zeman. They too claimed their minds' eyes were blind, but unlike Zeman's original subject, many of these people had lived with the condition their entire lives. They only became aware of their condition later in life when, as Bainbridge mentions above, they realized that the mental worlds described by friends and family were based on more than fanciful expressions.

While some managed to live normal, even thriving, lives without visual memory, others found the condition distressing. As one subject told Zeman and his coauthors: "After the passing of my mother, I was extremely distraught in that I could not reminisce on the memories we had together. I can remember factually the things we did together, but never an image. After seven years, I hardly remember her."

Zeman published another case study focusing on 21 of these individuals in 2015. It was here that he coined the phrase* "aphantasia," from the Greek phantasia meaning "imagination." Since then, Zemen has connected with thousands of people claiming to have the condition, and his studies have raised intriguing questions for researchers interested in memory and the mind.

Bainbridge is one such researcher. Her previous work has focused on perception and memory, both their underlying mechanics and how this content is stored. In her latest study, she and her co-authors aimed to not only tease out the distinctions between object and spatial memory but also deepen our understanding of aphantasia.

To do this, they invited 61 people with aphantasia and a group of controls to participate in their experiment. They showed each participant a photo of a room and then asked them to draw it in as much detail as possible. For one test, the participants were allowed to keep the photo for reference. For the next test, however, they had to draw the room from memory. Bainbridge and her coauthors then put the drawings online to be quantified by nearly 3,000 online assessors, who were asked to score both sets of test images for object and spatial details.

The results showed the aphantastic participants had difficulty with the memory experiment. They produced reproductions with fewer objects, less color, and fewer details than their control peers. Many leaned on verbal scaffolding in lieu of visual details—for example, one participant drew a rudimentary box with the word "window" rather than a window with a frame and panes of glass.

Although the aphantastic patients drew rooms with fewer objects, they were very accurate in their placement of those objects. They also made fewer errors than the controls and avoided incorporating features and furniture absent in the original images. The researchers write that this suggests high spatial accuracy despite a lack of visualization.

"One possible explanation could be that because aphantasics have trouble with this task, they rely on other strategies like verbal-coding of the space," Bainbridge told UChicago News. "Their verbal representations and other compensatory strategies might actually make them better at avoiding false memories."

Bainbridge and her coauthors suggest that these results not only support the idea that object and spatial information is store in separate neural networks. They also provide "experimental validation" for aphantasia as a valid psychological phenomenon.

Discovering a new reality in aphantasia?

And Bainbridge's study has joined an ever-growing panoply. A 2018 study, also published in Cortex, measured the binocular rivalry—the visual phenomenon in which awareness fluctuates when different images are presented to each eye—of participants with and without aphantasia. When primed beforehand, control participants choose the primed stimuli more often than not. Meanwhile, aphantastic participants showed no such favoritism, whether primed or not. Like Bainbridge's study, these results suggest a physiological underpinning for aphantasia.

Another critical factor is growing awareness. As more studies and stories are published, more and more people are realizing they aren't alone. Such a realization can empower others to come forward and share their experiences, which in turn spurs researchers with new questions and experiences to study and hypothesize over.

Yet, there's still much work to be done. Because this psychological phenomenon has only recently been identified—Galton's observation notwithstanding—there has been sparingly little research on the condition and what research has been done has relied on participants who self-report as having aphantasia. While researchers have used the Vividness of Visual Imagery Quiz to test for aphantasia, there is currently no universal method for diagnosing the condition. And, of course, there is the ever-vexing question of how one can assess one mind's experiences from another.

"Skeptics could claim that aphantasia is itself a mere fantasy: describing our inner lives is difficult and undoubtedly liable to error," Zeman and his co-authors wrote in their 2015 case study. "We suspect, however, that aphantasia will prove to be a variant of neuropsychological functioning akin to synesthesia [a neurological condition in which one sense is experienced as another] and to congenital prosopagnosia [the inability to recognize faces or learn new ones]."

Time and further research will tell. But scientists need phenomenon to test and questions to experiment on. Thanks to researchers like Zeman and Bainbridge, alongside the many people who came forward to discuss their experiences, they now have both when it comes to aphantasia.

* Zeman also coined the term "hyperphantasia" to describe the condition in which people's psychological imagery is incredibly vivid and well-defined.