NASA will pay $500,000 for your innovative ideas about food production in space

NASA will pay $500,000 for your innovative ideas about food production in space

What early U.S. presidents looked like, according to AI-generated images

Who is most at risk for work addiction?

There’s no way we could stop a rogue AI

NASA has big plans for the coming decades. The agency's Artemis program has set its sights on returning to the Moon after an absence of nearly 50 years. Once there, the first woman and next man to walk the lunar surface will begin establishing a base camp, laying the foundation for the sustained exploration and economization of Earth's solar sibling. Then it's off to Mars.

But a journey to the ruddy planet, a distance of roughly 114 million miles, will require NASA to solve a myriad of logistical and engineering problems. Chief among them is the problem of food.

Although humans have maintained a continuous presence in space for 20 years aboard the International Space Station (ISS), food hasn't proven an issue as the station orbits a mere 220 miles above our terrestrial home. NASA and other space agencies can easily send astronauts care packages containing fresh fruit and veggies alongside shelf staples.

Mars-faring astronauts, however, will not have it so easy. The time and distance required for the expedition will make regular resupply infeasible. Astronauts will need to bring all their food with them, alongside the means of producing that food, and keep those supplies within the volume constraints of the spacecraft.

It's a problem with no obvious solution. That's why NASA is challenging entrepreneurs, college students, hobbyist investors, and you, if you're up for it, to help them devise one.

The way to an astronaut's heart 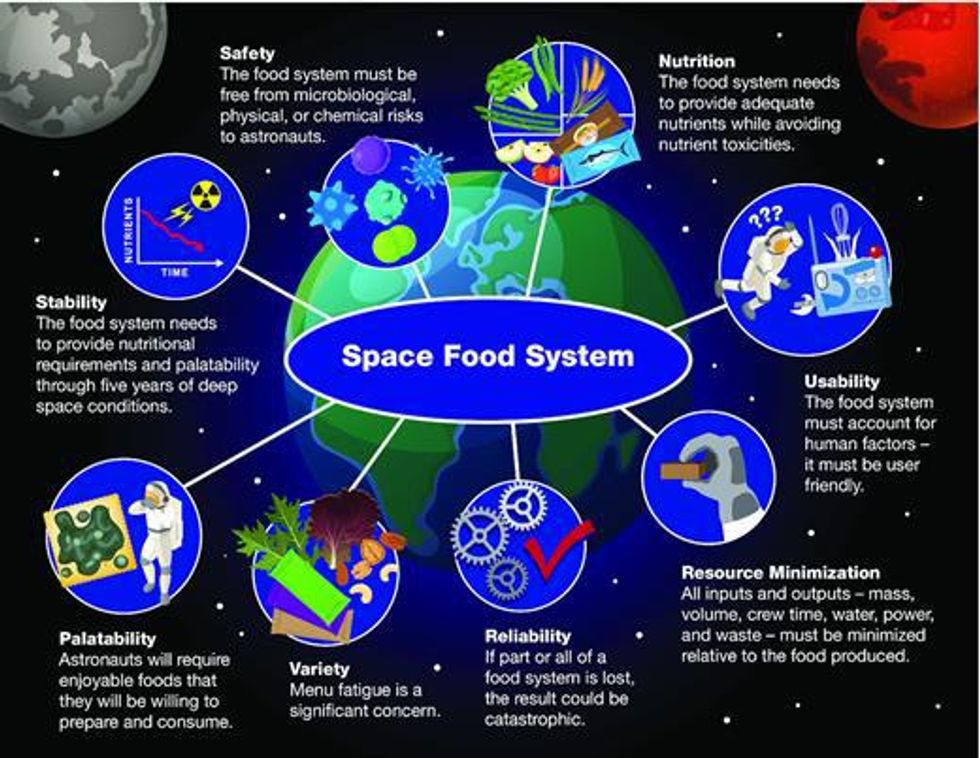 An image showing the different challenges a viable space-food system solution must overcome.

Credit: The Journal of Nutrition

In a paper written for The Journal of Nutrition, Grace Douglas, NASA's lead scientist for advanced food technology at Johnson Space Center in Houston, outlined the necessities for food technologies in long-term space exploration. The most critical being, of course, survival.

"In the history of humankind, explorers set off to see what was over the horizon, and literally millions did not return because of food and nutrition failures," Douglas and her co-authors wrote.

The difficulty is that the processes we rely on to cook meals on Earth—such as boiling water, hot surfaces, and food preparation—work as they do because they are bound to an environment with gravity, atmosphere, atmospheric pressure, and even certain microbes. Spaceflight replaces that environment with one of microgravity, scarce resources, cabin pressure fluctuation, and unmitigated radiation, each adding their own variable to the cooking calculus.

To date, space food preparation has been limited to adding water or heating pre-packaged foods. When supplemented with fresh produce from Earth, the system works fine. But as mentioned, such a system would be infeasible for the more than two-year roundtrip to Mars and back.

Douglas and her coauthors conclude that any viable solution must provide safe, stable, palatable, and reliable food, while also overcoming environmental constraints, using minimal resources, and producing minimal waste. It would also need to provide all the micro- and macronutrients a spacefaring astronaut needs.

That alone is a tall order, but there is another wrinkle engineers must consider: the astronauts' mental wellbeing. Douglas and her co-authors note that it's a "common misperception" that astronauts will eat anything to complete the mission. While astronauts are high-performing individuals, they still require moments to revitalize their wellbeing against the stress, workload, and isolation inherent in such a mission.

Delicious, nutritious meals can provide such moments of mental reprieve, but they also must have variety. Even the tastiest meal in the finest of restaurants would become a mental chore if eaten day-in, day-out for two whole years. Substitute that with a tasteless, yet nutrient-dense food paste in the vacuum of space, and even the highest performers will develop a case of cosmic cabin fever.

One tough space nut to crack

To meet these challenges, NASA is crowdsourcing solutions through its Deep Space Food Challenge. In collaboration with the Canadian Space Agency, NASA is offering a $500,000 prize purse for solutions that add some flavor to extended spaceflight.

"NASA has knowledge and capabilities in this area, but we know that technologies and ideas exist outside of the agency," Douglas told UPI in an interview. "Raising awareness will help us reach people in a variety of disciplines that may hold the key to developing these new technologies."

The agency hopes the winning technologies will also bolster food production on Earth. If a system can offer tasty meals with minimal resources in space, the reasoning goes, then it may be modified for deployment to disaster areas and food-insecure regions, as well. The challenge is open to all U.S. citizens and closes on July 30, 2021. Information on the Canadian Space Agency's challenge is available on its website.

If food isn't your forte but you've got engineering chops, you can still help NASA solve the many other engineering and logistical problems facing the future of space exploration. Through the NASA Solve initiative, the agency is seeking ideas for breaking lunar ice, shrinking payload sizes, and developing new means of energy distribution.

And even if engineering isn't for you, you can still call your Congressional representative to request they support NASA and restore funding from budget cuts. We can all play a small, yet important, role in the future of space exploration and the advancing of scientific knowledge.