This is outrageous ... a man who was simply videotaping cops who stopped a black driver was ordered to stop taping, and it ended with the guy getting assaulted. 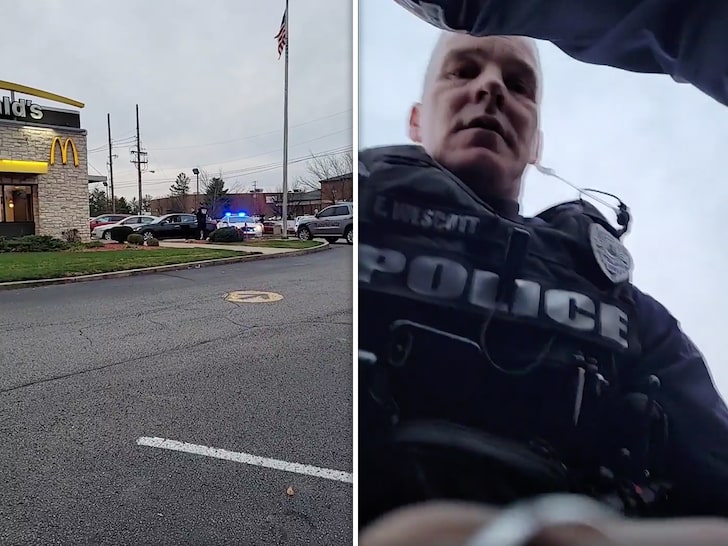 9:45 AM PT -- Police Chief Richard Sanders tells TMZ, his Dept. is conducting an internal affairs investigation into the incident, and the officer involved in the incident has been placed on administrative leave pending the results. The Chief would not comment on the words the officer used to allegedly say he was suspected to be the getaway driver -- as you hear in the video, the cop tells Bennett he was "involved" but doesn't say involved in what. The Chief added, "I don't think he was involved [in bank fraud] but that's what I'm trying to find out."

A man who was videotaping cops who stopped a black driver was ordered to stop taping, and it ended with the guy getting assaulted.

Waiting for your permission to load the Facebook Video.

Joe Bennett was driving home in Jeffersontown, Kentucky when he saw a number of police cars swarm a car. Bennett decided to live stream the stop on Facebook ... as he said, he was doing his "due diligence as a citizen."

Joe is at least 50 feet away, and maybe further, saying "I just wanted to observe, so I tried to give them distance."

He actually says the video is "the most boring live video ever," when at the 3-minute mark a cop walks ominously toward Bennett and orders him to stop filming, coming up with an excuse that it's a crime scene investigation -- as if that's a justification.

Bennett refuses to stop, so the cop asks for his ID. Now, technically, if a cop asks for ID -- even if the request violates the law -- you're supposed to comply, but Bennett says he did nothing wrong so he refuses. That's when the cop attacks, grabbing for Bennett's phone and slugging him.

A police official told Spectrum 1, "Officers were in the area investigating and making arrests related to a check fraud scheme thwarted at the Citizens Union Bank across the street from the McDonalds." What's unclear ... cops reportedly say a suspect claimed Bennett was the driver in the check fraud scheme. You do hear the cop say, "you are involved," but Joe tells us he was never told he was being accused of a check fraud scheme.  "You're involved" could mean he's involved because he's videotaped the stop.

Joe tells TMZ the citation says, "Officers were investigating a case where fraudulent checks were being cashed at a local bank. Officers were informed that there was a gray Jeep involved. Officers were told that the gray Jeep was picking up offenders after they attempted to cash the fraudulent check. This officer was informed that the above subject [Joe Bennett] at which time was standing on the side of his vehicle was the driver of the gray Jeep. Officer approached the subject and asked him for identification. Subject refused. Officer told the subject he was named in the investigation and the subject still refused to identify himself. Officer attempted to put handcuffs on the subject before things escalated. Subject tensed up and started to pull away. Officer delivered one empty strike to the subject and took the subject to the ground."

Bennett says he was cited for resisting arrest and menacing. Bennett tells TMZ officers cleared him at the scene in the check fraud scheme.

We reached out to the police department ... so far, no word back.