The history of America, by and for doctors

How talking with your hands alters the perception of your words

Walking 10,000 steps a day? It's just an arbitrary number

A philosophy of habit: What our routines can tell us

The unfamiliar landscape of America's medical past is marked by bizarre incidents, forgotten breakthroughs and selfless sacrifice 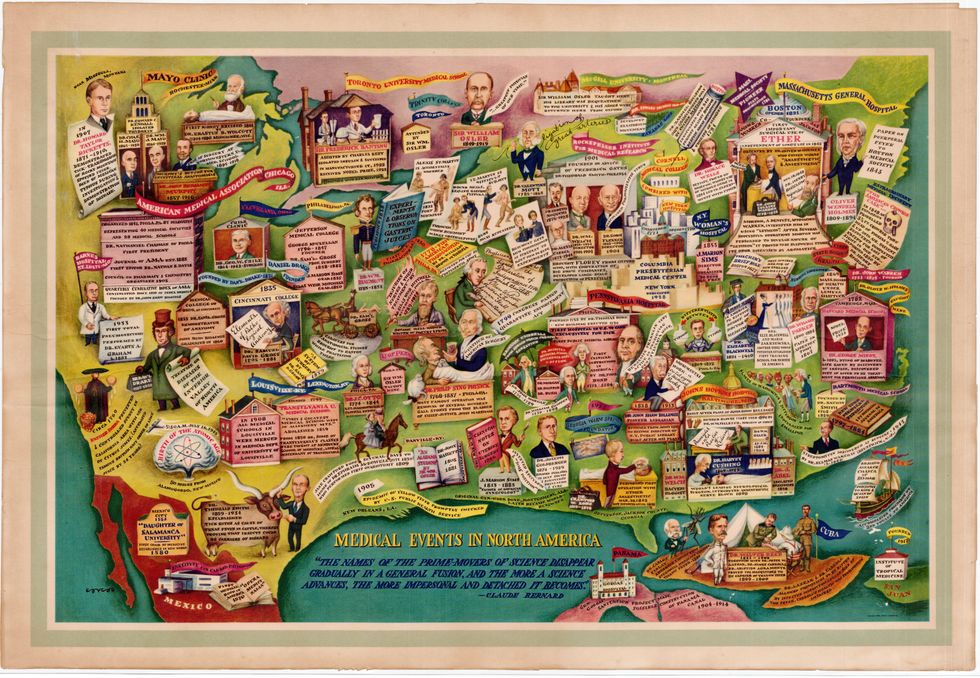 The map illuminates the topography of America with simplified, symbolic representations of the persons, institutions and events that have shaped medical history.

The map of America is a familiar canvas for a multitude of stories – soil types and weather fronts, road trips and election results. But sometimes geographical acquaintance intersects with narrative quaintness, especially when the topic is very specific. As in this beautifully detailed map of Medical Events in North America, as bizarre as it is instructive.

In the manner of a medieval miniature, it illuminates the topography of America with simplified, symbolic representations of the persons, institutions and events that have shaped medical history. That makes for some interesting discoveries.

For example, whatever our feelings about Columbus, we are familiar with him via his signature achievement. However, few will have heard of Dr. Diego Alvarez Chanca of Seville, physician to the king and queen of Spain, and here seen accompanying the intrepid and/or invidious Genovese on his second voyage to America (on the ship painted in the bottom left corner). 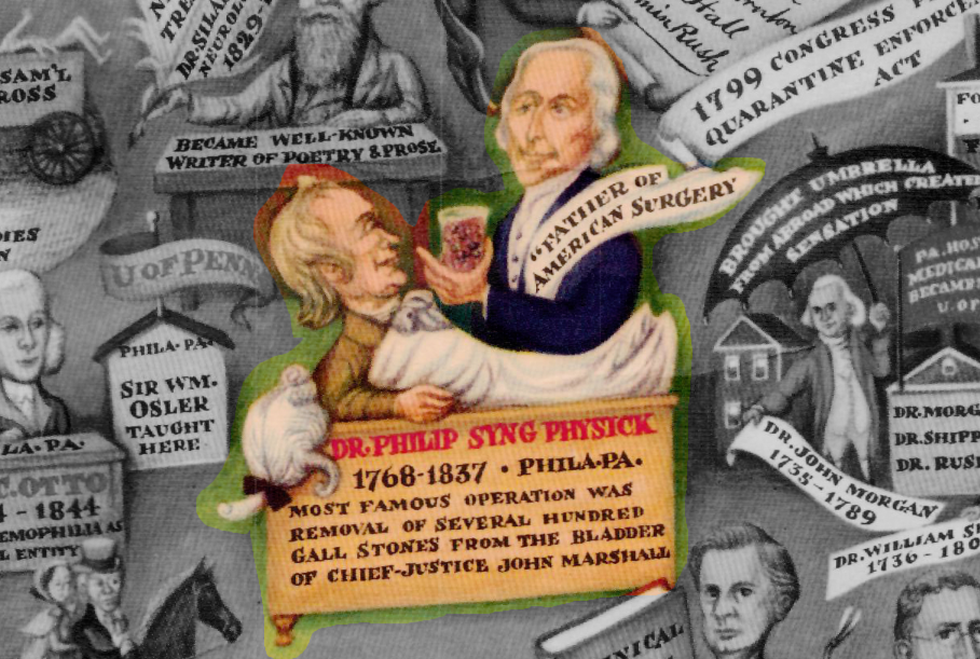 Dr. Philip Syng, holding up a jar with gallstones he removed from the bladder of Chief-Justice John Marshall, who contentedly observes from the operating table.

While on Hispaniola in 1493, Chanca cured Columbus from an attack of malaria – quite probably the first application of western medicine in the western hemisphere.

For a good while, Spain remains the motor of medical progress in North America, with the publication in Mexico of Opera Medicinalia, the first medical book printed in the Americas (1570), and just 10 years later, the establishment of the first university chair of medicine in the New World, also in Mexico.

Circa 1760, Junipero Serra prevented and controlled an outbreak of scurvy in California with the use of citrus juice – doing so 34 years before the British Navy struck upon the same idea. The Spanish padre is shown holding up oversized slices of oranges, dripping with healing sap.

Soon thereafter, the initiative – medical and otherwise – is seized by the Anglos on the East Coast. 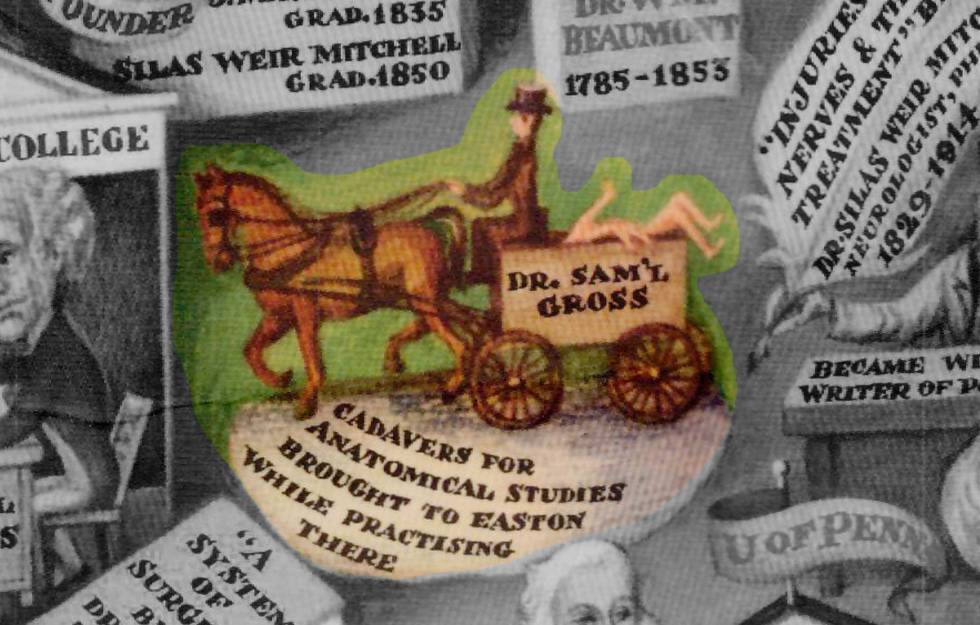 Many of the achievements detailed on this map were truly revolutionary, helping to elevate the state of medical science to the heights it has reached today. But, as the legend of the map says, "(t)he names of the prime-movers of science disappear gradually in a general fusion, and the more a science advances, the more impersonal and detached it becomes."

So it's nice to see remembered here, among other pioneers: 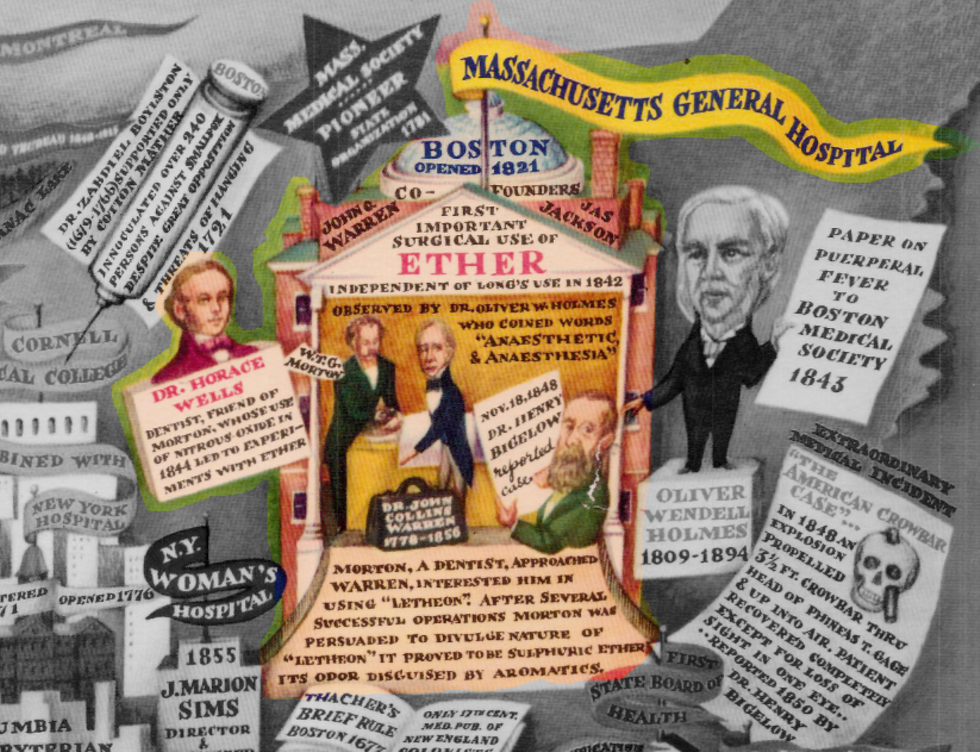 Several institutions are singled out as beacons of medical progress, notably

Among the achievements mentioned on the map with resonance for our own pandemic times are the Quarantine Enforcement Act, passed by Congress as early as 1799, and the stamping out, in 1905 in New Orleans of an "epidemic of yellow fever (…) by U.S. Public Health Service."Produced in 1950 and reflecting on earlier times, the map is dominated by white males.

The exceptions proving the rule are 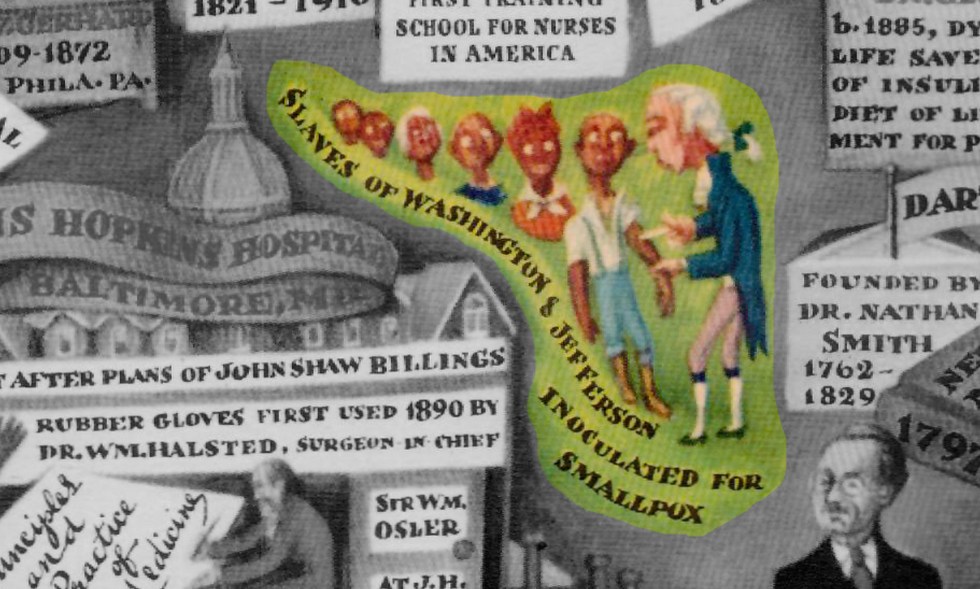 Slaves of Washington and Jefferson, getting inoculated for smallpox.

Few of the events and achievement mentioned on this map have made it into general public knowledge, with two possible exceptions.

One is "the American Crowbar Case", an 'extraordinary medical incident' mentioned in a note stuck to the East Coast: "In 1848, an explosion propelled a 3 ½ ft. crowbar through the head of Phineas T. Gage and up into the air. The patient recovered completely except for loss of sight in one eye…"

The other, the curious case contained within Dr. William Beaumont's book, Experiments & Observations of Gastric Juices. On June 6th, 1822, a man named Alexis St. Martin was accidentally wounded by gunshot at Fort Mackinac. The wound healed, leaving a gastric fistula, through which Dr. Beaumont was able to make observations. But Mr. St. Martin "is a difficult subject (and) runs away repeatedly." 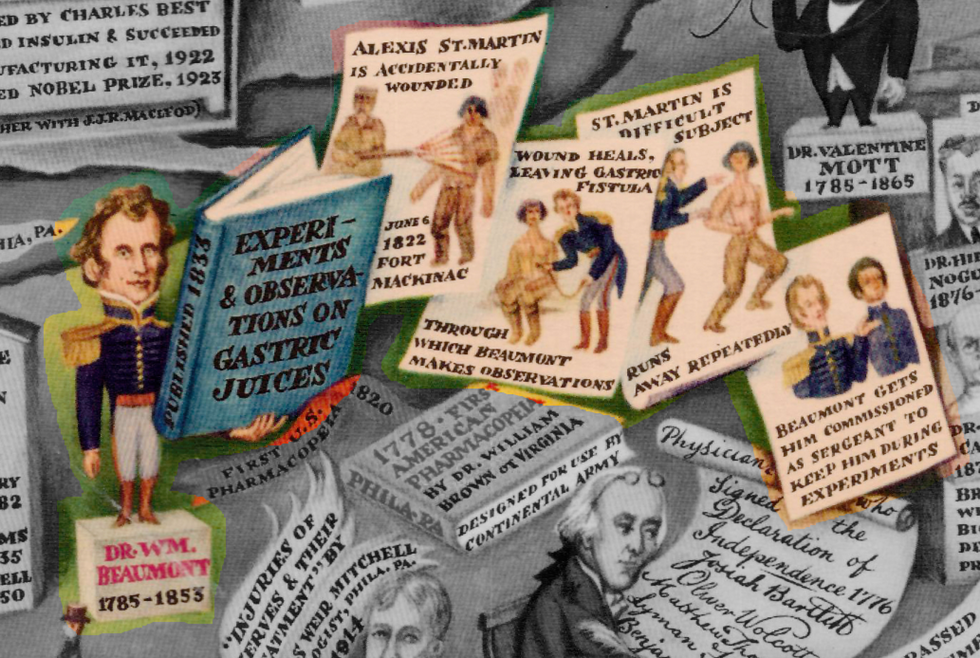 Really? Who doesn't want a doctor poking into their stomach through a hole in their belly? But eventually the situation is resolved to the satisfaction of both parties: "Beaumont gets (Mr. St. Martin) commissioned as sergeant to keep him during experiments."

One of the more familiar names on the map is that of Dr. Walter Reed, but mainly because he is now synonymous for the Army Medical Center named after him. The map reveals why he became famous enough for that honor:

In Cuba, Dr. Walter Reed (1851-1902) proved, together with Dr. Jesse W. Lazear, Dr. James Carroll and Dr. Aristide Agramonte, that mosquitoes were the carrier of yellow fever. Dr. Lazear & Dr. Carroll allowed themselves to be bitten by infected mosquitoes. Lazear died of the fever, Carroll's health was permanently impaired. 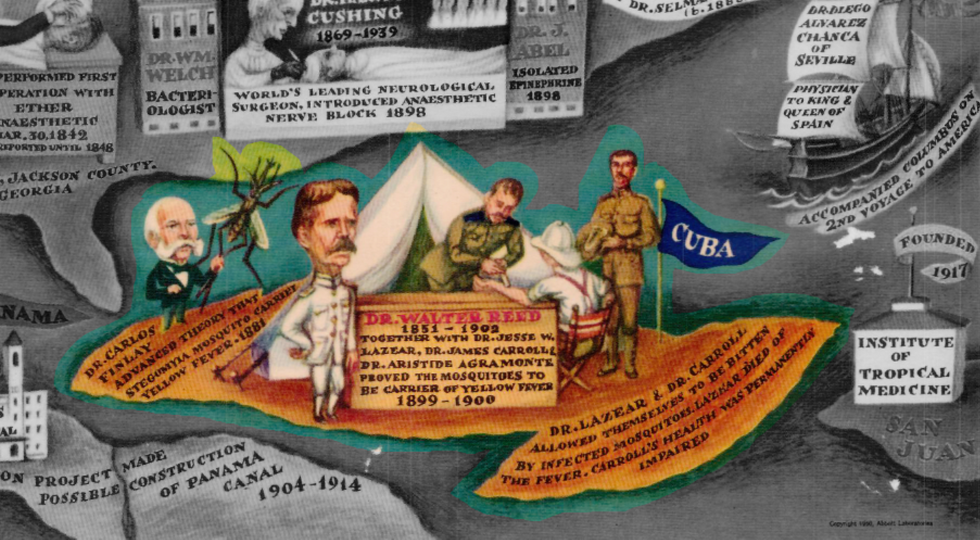 Dr. Walter Reed (in white), in between Dr. Carlos Finlay (who first theorised that mosquitoes carried yellow fever) and Drs. Lazar and Carroll, who put that theory to the test.

Although they are scant remembered today, their selfless sacrifice has doubtlessly saved the lives of many in the 120 years since. 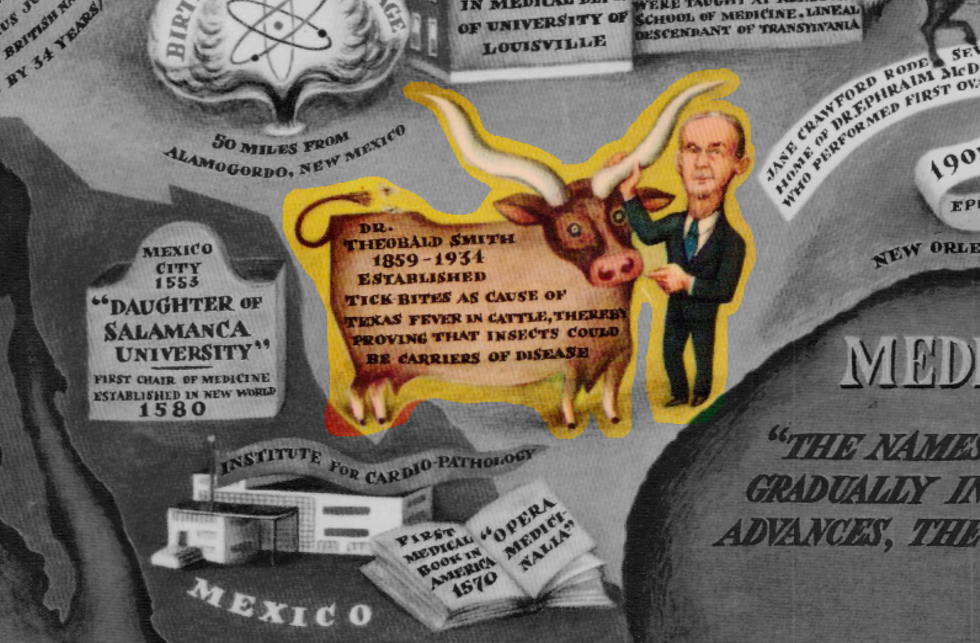