Shutting down racists: Cardi B spends $130K on new Hermès Birkin bags to trolls who say the luxury items have 'lost their value' because of black women

Cardi B clapped back at racist trolls Sunday, after they argued that Hermès' notoriously exclusive line of Birkin bags have 'lost their value' because of Black women buying them up.

The Grammy winner is no stranger to indulging in the finer things in life, often showing off her opulent style.

Cardi B reportedly raked in eight figures last year, a decent salary for one of the biggest names in music.

She clapped back at racist trolls Sunday, after they argued that Hermès' notoriously exclusive line of Birkin bags have 'lost their value' because of Black women buying them up.

The 28-year-old posted a video Sunday to Instagram, responding to a tweet that criticized her collection of the pricey bags (which have ranged in price from $9,000 to $500,000)

Offset later shared an Instagram Story of Cardi's receipt which revealed that she had spent nearly $130K at the luxury store.

She said: 'I’ve been seeing this tweet, right? It had me and it had other female rappers on it. They were talking about if we could get Birkins from the Hermés store and they was also saying how we depreciate the value of a Hermés Birkin bag.

'And I find that really interesting because, first thing first, I definitely could get a bag. Actually, I got four bags today from the Hermés store. I don't wanna brag, but it's like,

Cardi went on to explain that white celebrities don't exactly go through the same scrutiny.

She said: 'Second of all, why is it that yall asking female rappers if they could get a bag from the Hermes store. Yall dont do this to these white celebrities... So why is it that y’all gotta be asking us?

'Another thing is that they’re saying we’re depreciating the value. Actually, we add value because when we mention brands in hip-hop, their s*** go up.'

She referenced her 2017 breakout single Bodak Yellow, which sparked a 217 percent spike in searches for Christian Louboutin shoes, according to Business of Fashion.

It came after she took to her Instagram Story with a video of herself and husband Offset, 28, at an Hermés store, before showing off her latest purchase.

Offset also chimed in on his own Instagram, writing: 'Stop letting people on the internet tell ya’ll who can get a Birkin at the store, and how many Birkin’s you can get.Black people having access to luxury shouldn’t be a debate...by the way hip hop starts the trends !'

Stop letting people on the internet tell ya’ll who can get a Birkin at the store, and how many Birkin’s you can get.Black people having access to luxury shouldn’t be a debate...by the way hip hop starts the trends !

Cardi later took to her Instagram Story with a screenshot of the original post, writing to her 77.4million followers: 'By the way this is the tweet before ya start wit the fake drama.'

The post read: 'Sorry idc if this comes off as anti black but it is what it is. Birkins have literally lost their value. The city girls and Cardi have got y'all convinced that these birkin bags are easy to get.

'There's a certain number of Birkin's that are made per year. There are BILLIONAIRES who are spending months/years on a waiting list just to get one. These bags are supposed to be exclusive and you're supposed to be big in the fashion world and have relationships with these people to get one.

'That's why rihanna has a birkin bag that was only made twice, with Beyoncé having the other one. A little rap duo from Miami who can't even land a vogue cover or a number #1 do not have authentic birkin bags sorry.' 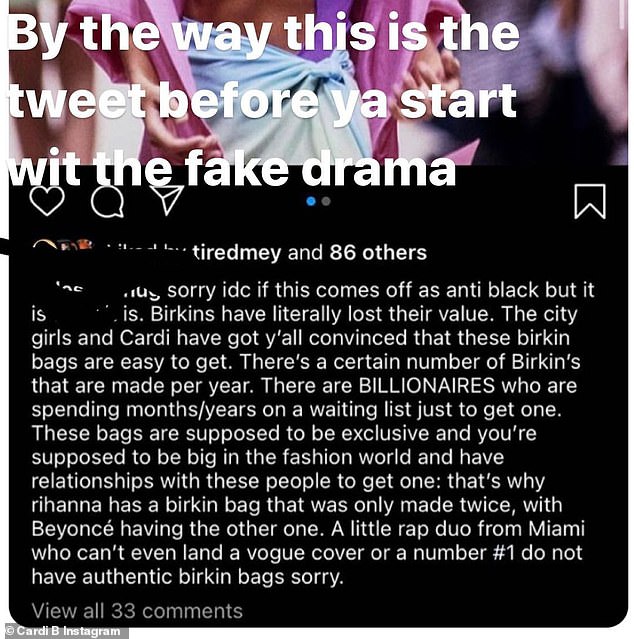 Cardi has long been known as an influential figure in both hip hop and fashion, becoming the face of Balenciaga last month, modeling for the luxury brand on a billboard outside the Louvre in Paris.

She's also made her love of Birkins clear, showing off her collection earlier this month on Instagram, featuring one in nearly every color.

The Hustlers actress and Offset faced backlash in July, when they gifted daughter Kulture a $9,000 mini pink Birkin for her second birthday.

She responded on her Instagram Story, stating: 'If I'm fly and daddy's fly, then so is the kid. If I'm wearing Cha-nay-nay, my kid's having the same same. It's not up to what the kids like. If it was the kids, they would be outside in diapers. No.

'Cause if I was looking like a bad b****, expensive bitch, and I have my kid looking like a bum bum, then y'all would be talking s***. So I'm not mad that daddy bought baby a Birkin. She gonna match mommy.'

More from: USAGAG
1
Scientists have confirmed what Albert Einstein predicted over a ...
2
The school refuses to cancel Dave Chappelle's show, claiming ...
3
China's global net worth might plummet by 68 percent
4
As the Turkish government devalues the lira, Turks are ...
Filed under Cardi B ,  Hermès Birkin ,  racists