Kanye West’s troubled mental state has been on full view in tweetstorms and on the campaign trail. A series of concerning tweets and public appearances over the years have likely been the result of the 43-year-old rapper’s bipolarism, according to his wife Kim Kardashian, who, along with her family, has been the subject of his …

Kanye West’s troubled mental state has been on full view in tweetstorms and on the campaign trail.

A series of concerning tweets and public appearances over the years have likely been the result of the 43-year-old rapper’s bipolarism, according to his wife Kim Kardashian, who, along with her family, has been the subject of his ultrapersonal rants and claims.

“As many of you know, Kanye has [bipolar] disorder,” Kardashian once explained about her husband to fans and begged for “compassion and empathy . . . so that we can get through this.”

West’s erratic behavior is part and parcel of the mental health disorder, which, according to the American Psychiatric Association, can bring on “extreme and intense emotional states” and can include “risky behavior” and irritability.

How did the 21-time Grammy winner get here? Here’s a look into the disorder and its effect on West over the years.

What is bipolar disorder?

Bipolar disorder — type I, II or more mild cyclothymia — is defined by “dramatic shifts in a person’s mood, energy and ability to think clearly,” according to the National Alliance on Mental Illness. The 4.4% of Americans with bipolar disorder experience alternating periods of mania and depression that can each last months.

Manic moods, characterized by a euphoric but outsize sense of self-confidence, can lead to erratic behavior — anything from “jumping from one idea to another” or “irritability” to spending sprees or “sexual liaisons,” Dr. Lloyd Sederer, chief medical officer at the New York State Office of Mental Health, recently told The Post.

“Periods of high stress, such as the death of a loved one or other traumatic event,” are a risk factor, according to the Mayo Clinic. Doctors emphasize that many stressors and factors, known and unknown, can lead to a manic episode.

According to a source close to the rapper, West is prone to working as much as 48 hours at a time — and it could be working against him.  “Doing many activities at once [and] scheduling more events in a day than can be accomplished” is a sign of manic behavior, according to the American Psychiatric Association.

“False beliefs or false perceptions” can also be a sign of bipolarism, according to Harvard Medical School, as well as an “exaggerated, puffed-up self-esteem,” one mirrored by the artist’s tracks “I Am A God” from the 2013 “Yeezus” album, and grandiose statements such as, “I’m the greatest human artist of all time.”

Whatever form the mania takes, one thing remains true: Every episode raises the patient’s odds of having another. “It’s the kindling theory,” Sederer explained. “There’s been more wood added to the fire, so it’s easier for the fire to be ignited.”

West has exhibited erratic behavior long before he went public with his diagnosis, such as his interruption of Taylor Swift at the 2009 VMAs. “I’mma let you finish,” West famously said to Swift after she scored the award for Best Video by a Female Artist. “But Beyoncé had one of the best videos of all time!”

The pop giants’ rivalry continued for over a decade. On Nick Cannon’s podcast in 2020, West claimed that God told him to storm the stage. Delusions of grandeur, like being a prophet or a God, can indicate a manic episode, like in the case of Zack McDermott, who wrote about his experience with bipolar disorder in his memoir.

Kanye also had to cancel the remainder of his “Saint Pablo Tour” dates in November 2016 after a shortened concert left audiences enraged. An “exhausted” West was later hospitalized.

In 2018, the album art for West’s eighth record, “Ye,” included the phrase, “I hate being / Bi-Polar / it’s awesome” over an iPhone picture of the Wyoming mountain range. West also referred to the disorder as “my superpower” on the album.

The follow year, West became more vocal about being bipolar during interviews.

“‘Crazy’ is a word that’s not gonna be used loosely in the future,” West told Forbes in 2019. “Understand that this is actually a condition that people can end up in, be born into, driven into and go in and out. And there’s a lot of people that have been called that ‘C’ word that have ended up on this cover,” he said, referring to the magazine.

In an interview with David Letterman, West detailed his experiences with the disorder, saying that during an episode, everything can feel like “a conspiracy.”

“You feel the government is putting chips in your head,” he told Letterman, adding that he only got his diagnosis two years prior to their 2019 interview. “You feel you’re being recorded. You feel all these things.”

Signs of familial trouble came for the West’s following Kanye’s announcement on July 4 that he’d be running for president, and at a presidential campaign rally in North Charleston, South Carolina.

Sporting a bulletproof vest and with “2020” shaved into his hair, the rapper gave an emotional and, at times, hysterical speech later in July. “I almost killed my daughter,” yelled West as security guards looked on with concern, describing how he and then-girlfriend Kardashian debated an abortion.

He also brought up eyebrow-raising assertions, including that slavery was “a choice” and that “Harriet Tubman never actually freed the slaves” at his campaign rally.

West, who signed a 10-year contract with Gap for a new line, also threatened to pull out of the deal and sent stock plunging.

In the months closer to the election, West spent a ton of his own money on the campaign — excessive spending can be a tell-tale of bipolar according to the International Bipolar Foundation — and has sued Wisconsin to get on the ballot after missing key filing deadlines in a few states.

In a few brief but bizarre Twitter rants in July — most of which have been deleted — West claimed his family sent two doctors to his ranch in Cody, Wyoming, to “51/50” him, referring to an involuntary psychiatric hospitalization “of up to 72 hours for assessment, evaluation and crisis intervention,” according to California law.

The “Graduation” hit-maker added that he’s been “trying to get a divorce” since “Kim met Meek at the Waldorf for ‘prison reform,’” referring to a 2018 summit on criminal justice reform the two attended. He also accused the Kardashian-Jenner clan of “white supremacy” and referred to his mother-in-law as “Kris Jong-Un.”

Kardashian took to Instagram that week to explain West’s behavior and ask their fans and foes for understanding.

“As many of you know, Kanye has [bipolar] disorder,” she wrote of her husband’s meltdown. “Those who are close with Kanye know his heart and understand his words [sometimes] do not align with his intentions.”

The billionaire and mom of four asked for “compassion and empathy . . . so that we can get through this” in her statement.

Some have speculated that those episodes could have been brought on by the birthday of his late mother, Donda, who would have been 71 on July 12. She died in 2007 while undergoing plastic surgery.

Kardashian alluded in her statement to West’s “painful loss of his mother.”

The stresses of the coronavirus pandemic — which reportedly had the couple “at each other’s throats,” according to Page Six — in early May may also have been a factor, some speculate. 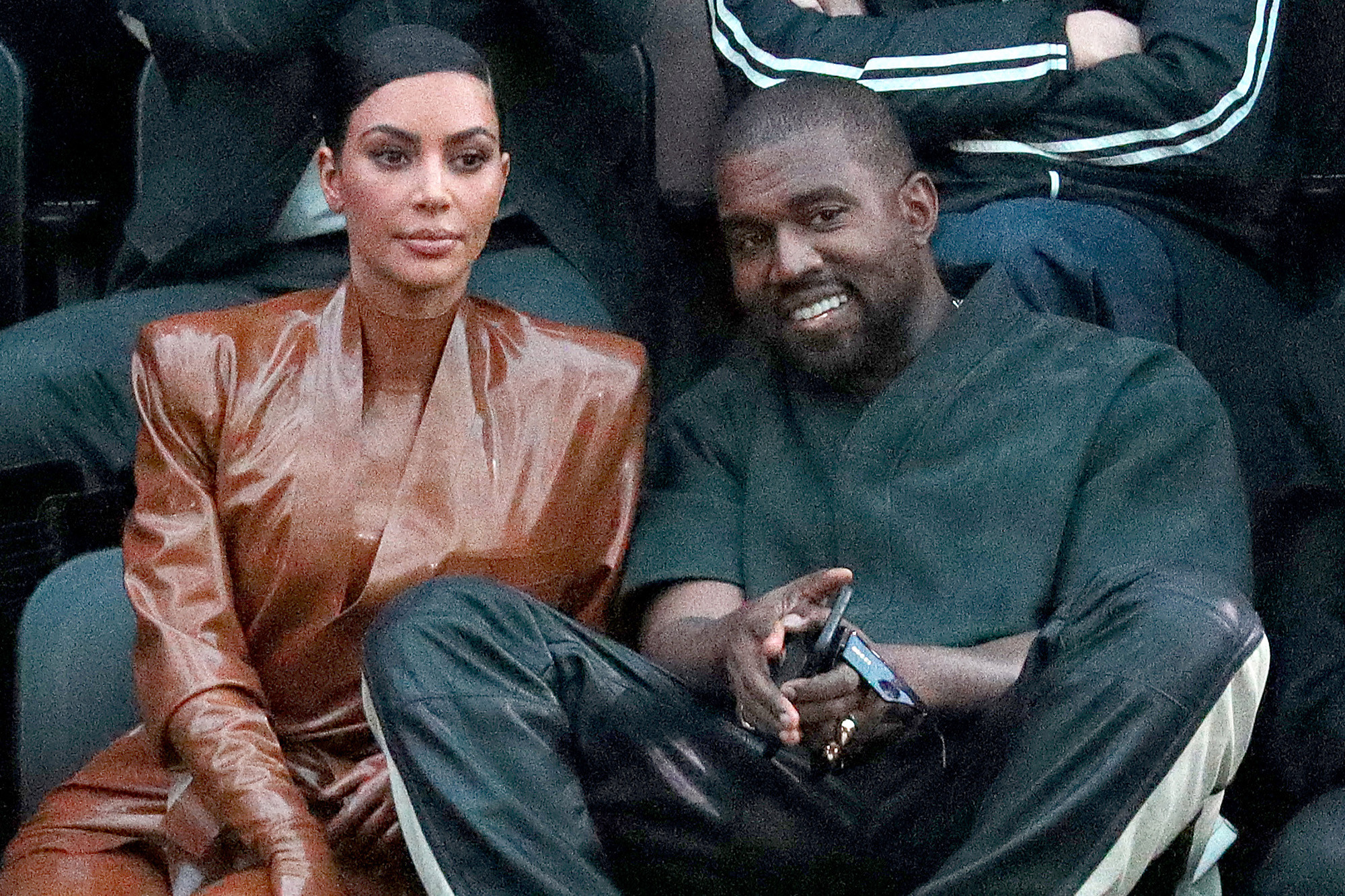 Kanye took center stage on Twitter again around the time that his wife and in-laws announced that “Keeping Up with the Kardashians” would end after 20 seasons in September. Plans for a “Christian TikTok,” pics of his hand injured from “too much texting” and reports that Kanye campaign staffers were told to refrain from pre-marital sex all took a backseat to Kanye’s public dispute with Sony and Universal — all of which happened in one week.

The rapper claims that the recording companies — Universal-owned Roc-A-Fella, Def Jam and West’s own GOOD Music labels — have him locked into an unfair contract where they own the master recordings of his tracks. He tweeted pictures of signed legal documents — he claimed they were 10 of his contracts — and demanded, “I need every lawyer in the world to look at these.”

West demanded to speak with fellow artists Drake, Jay Z, J. Cole and businessmen including Arnaud De Puyfontaine, the CEO of the parent company to Universal Music Group, in his frantic feed.

The online tear came to a head when Kanye tweeted out a video that appears to show him urinating on his own Grammy award, which he had placed in a toilet. He wrote, “Trust me … I WONT STOP.” But Twitter stopped him: his account was locked until he removed a tweet with a screencap of Randall Lane’s cell phone number, encouraging his fans to reach out to the Forbes editor.

The disorder is often treated with behavioral therapy and antipsychotic medications like quetiapine and Symbax. But according to a source close to the Wests, “[Kanye] won’t take medications because he feels they make him less creative.”

“You can benefit from treatment and you can have a big life,” Sederer previously told The Post, but a support system is key.

“If it comes to him being in the middle of a bipolar episode, I’ll do everything to be supportive and help to calm the situation,” his wife told Vogue in 2019.

Fellow superstar Lady Gaga, who opened up about her “mental issues” in an interview with Oprah, said olanzapine, a drug often used to treat bipolar, is a gamechanger. “Medicine really helped me,” the “Born this Way” singer told Winfrey.

The National Institute of Mental Health advises to “avoid stopping medication without talking to your doctor first” because allowing bipolar to go untreated “can be an important factor in suicide, job loss and family discord.”