A video of Ukraine President Volodymyr Zelenskyy telling his people to give up is fake. It was made with pictures from press conferences.

Volodymyr Zelenskyy, the president of Ukraine, is seen in a video that was shown on the news station Ukraine 24, and it quickly spread through social media.

The Ukrainian government had previously told its people that Russian spies might be making fake videos of President Volodymyr Zelenskyy. If you make an image or video of someone and make it look like they are real, it's called a "deepfake."

Afterwards, some people said the video was a fake. The Ukrainian National Guard also told people not to watch the fake video on Twitter.

WHAT IS THE QUESTION?

If you look at a video that was made on March 16, does Ukraine President Volodymyr Zelenskyy tell his people to give up to Russia?

No, this is not real. It is a fake. President Volodymyr Zelenskyy said in a message on his social media pages that the video was a "childish provocation" and that Russia should lay down its weapons.

VERIFY used video forensics tools and reverse image search to find out this video was a fake.

The broadcast of the TV channel Ukraine-24 was hacked, and a fake appeal by Zelenskyy to lay down arms to the military appeared on the running line below pic.twitter.com/TdhLKOP81R

What we found out

These technologies can be used to make fake faces, voices or expressions of emotions. Deepfakes are made with these technologies. TV station Ukraine 24 aired the fake video of Ukraine President Volodymyr Zelenskyy supposedly giving up to Russian forces on March 16. In the video, Zelenskyy looks like he's telling people in Ukraine to stop fighting and go back to their families in order to live.

The video isn't real. Video forensics tools and reverse image search can show that this video was made with still images from Zelenskyy's previous press conferences.

The background of the video also stays the same, and lines up perfectly with this picture of Zelenskyy at a press conference on Feb. 24. TinEye's reverse image search tool was used by VERIFY to look at other photos and see if they looked like the deepfake.

In the deepfake, Zelenskyy appears much taller, with broader shoulders and a different facial structure, compared to his appearances at earlier press conferences standing behind the same podium. 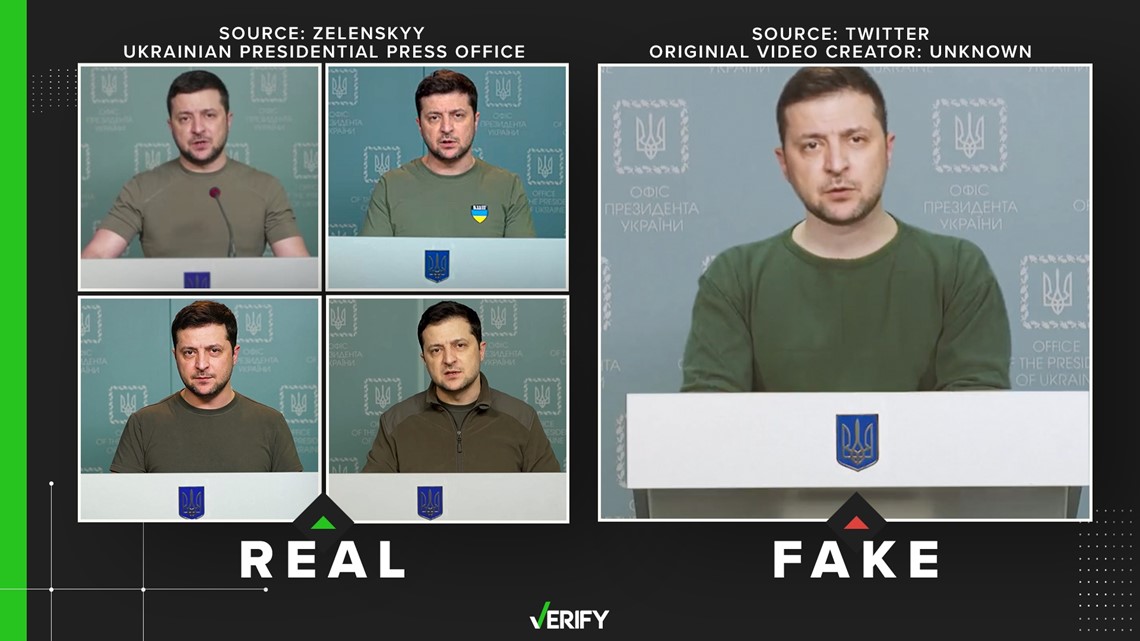 Ukraine 24 posted on its Telegram channel (in Ukrainian, translated via Google Translate) that the video aired while the station was under attack by hackers.

“Ukraine 24 TV channel and Segodnya website was hacked by hostile hackers and Zelenskyy's reports about the alleged ‘surrender’ were broadcast. Friends, we have repeatedly warned about this. This is a fake! Nobody is going to give up. Especially in conditions when the Russian army is defeated in battles with the Ukrainian army!‼” Ukraine 24 said on Telegram.

In response to the video airing on a national television station, Zelenskyy posted his own message to the people of Ukraine across his social networks.

“As for the latest children's provocation, which I offered to lay down my arms, I can offer to lay down arms and return home only to the Russian military. And we are already at home, we are protecting our children, our families. We are not going to lay down any weapons before our victory,” Zelenskyy said.

How To Spot a Deepfake Video

This isn't likely to be the last time we see a fake video during Russia's invasion of Ukraine.
Using "deepfakes," which are digitally edited videos that make it look like someone is saying or doing something they never said or did, is just one more way that propaganda experts try to change the story of the war in order to spread their own lies about it.

Most people will be able to tell that the Zelenskyy footage is fake just by looking at it.It doesn't look like his head fits on his neck.
The best way to tell if something is a fake is to look for the source. Video: Zelenskyy has made a lot of videos with the same background on his social media profiles and on the official social media pages of the government of Ukraine.This fake was, of course, never put on these pages.

More from: USAGAG
1
U.S. Creating Insect 'Bio-Weapons' to Cause Famines, According to ...
2
Will Reality Punish Andreessen Horowitz's Massive New Crypto Fund?
3
Bill Gates Invested in a Dark Money Fund to ...
4
Critics in Davos are calling cryptocurrency a 'pyramid scam,' ...
Filed under Zelenskyy ,  Russia