A homeless guy with a 16-year violent criminal history has been charged with first-degree assault after being captured on surveillance video performing a 'full body swing' with a baseball bat and striking a lady in the back of the head, leaving her bleeding and with a broken skull.

Wantez Tulloss, 31, was sought by police in Washington for third-degree theft and had been arrested 11 times since 2012.

On Monday, January 31, he was seen swinging at Emma Shegnang Wang, who was mentioned in court filings by prosecutors. He threw Wang to the ground, striking her on the head and back, and then left, taking his belongings with him.

She lay motionless on the ground, blood streaming from her ear, while onlookers raced to her aid.

Wang is a Seattle-based Amazon Web Services engineer. She is already healing and will need surgery.

Tulloss was witnessed swinging the bat in an alleyway by others seconds before, according to police records acquired by USA GAG. One eyewitness stated he smashed Wang's head and assumed he'd struck a concrete wall because of the sound it produced.

The assault was random, and investigators have yet to ascertain if there was a motivation. Wang did not see her assailant, and it is unclear if he said anything to her.

He went for a piece of pizza after beating her and was jailed.

Charges against the tattooed felon include fourth-degree assault, theft, and reckless driving. It's unknown when he was last locked up, or why he was out on the streets since he's such an evident danger.

Prosecutors pleaded with the court to refuse bail, arguing that he should not be permitted to stroll the city's streets.

Tulloss had never met the lady before the assault last Monday about 6.30 p.m., according to authorities.

Medics arrived on the scene last Monday and discovered the lady, whose family is all over the world, lying on her back on the pavement with blood gushing from her right ear.

They claimed to have heard a sound that caused them to turn around and see Tulloss pick up his luggage and walk away with a bat in his hand close to the lady who had fainted on the ground.

Witnesses rushed to the woman's rescue and immediately dialed 911. The sufferer is now being treated at Harborview Medical Center for a cracked skull and a suspected concussion, and is scheduled to undergo surgery.

The next day, Seattle police shared the footage of the event along with a picture of the suspect and got a reaction from a fellow officer who recognized the suspect as Tulloss.

Because of his unusual checkered facial tattoos, the officer recalled seeing the guy downtown on January 28 and utilized a police database to hunt for anyone with them.

'Since 2012, courts in Washington State have issued 11 warrants for the defendant’s arrest. The defendant currently has an outstanding warrant from Kirkland Municipal court for theft 3rd degree. The defendant is unlikely to appear for court out of custody.

'The defendant is a significant danger to the community and very likely to commit a violent offense if he remains out of custody,' prosecutor Brynn N. H. Jacobson said.

During the course of the investigation, police discovered Tulloss lives at the AL Humphrey House, a transient housing facility run by Plymouth Housing as part of the city's Housing First strategy, in which the homeless are given shelter without conditions before receiving services to address the underlying causes of their homelessness. KTTH reports.

Plymouth Housing, according to its website, offers a "non-judgmental atmosphere" for its tenants to "make adjustments if and when they are ready."

The AL Humphrey House is just around 500 feet from where the lady was struck.

Tulloss was arrested, and Seattle police investigators got a search warrant for his residence at the facility, where they discovered the clothing he was wearing in the video tape stashed in the oven.

While the luggage he was spotted carrying were retrieved, the baseball bat was not found. 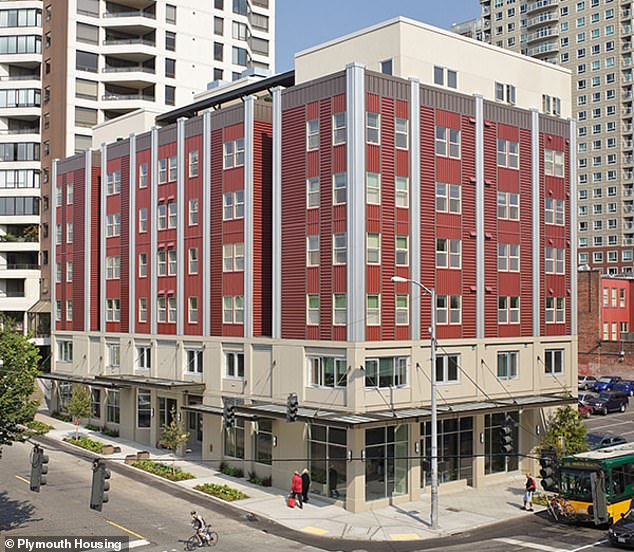 Tulloss lives at the AL Humphrey House (pictured), a transient housing facility run by Plymouth Housing as part of the city's Housing First strategy. It is located less than 500 feet from where the woman was hit 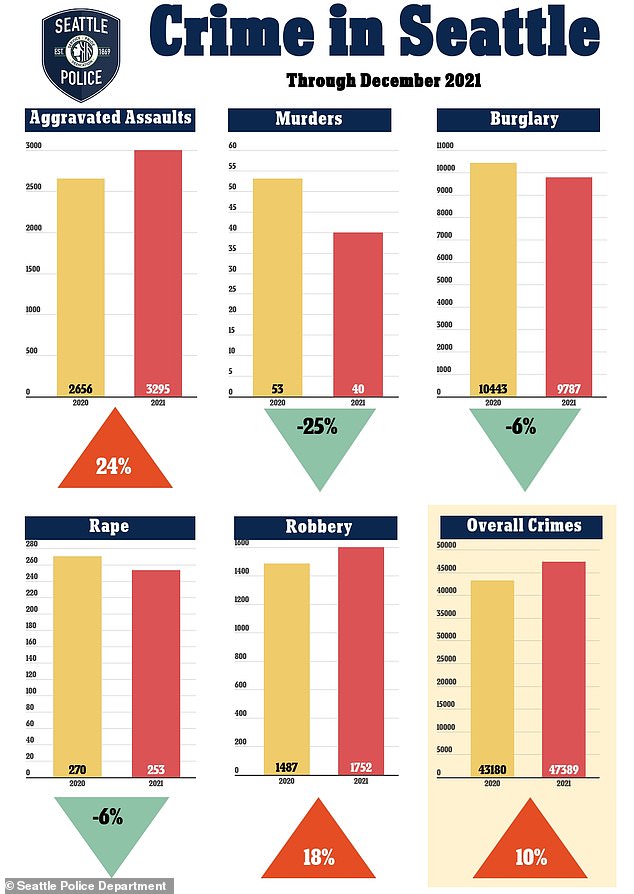 Robberies were up 18 percent in 2021 over the year before and aggravated assaults were up a whopping 24 percent, leading to a 10 percent increase in violent crimes

The attack comes amid an increase in violent crimes within the city.

According to the Seattle Police Department's 2021 Crime Report, robberies were up 18 percent over the year before and aggravated assaults were up a whopping 24 percent, leading to a 10 percent increase in violent crimes.

In all, violent crime in the city hit a 14-year high.

To address the rising issue, Mayor Bruce Harrell revealed a plan on Friday night to employ additional officers to react to crimes in the city, while the police department remains understaffed.

Interim Police Chief Adrian Diaz said last year that the Seattle police force required at least 1,400 officers to cope with the city's crime rate, but there are presently less than 1,000 deployable officers and the agency has only budgeted for 1,350 officers, KOMO reports.

Following the mayor's statement, Seattle police were called to investigate a series of shootings over the weekend, including a gun duel on Capitol Hill that resulted in more than 40 shots being fired and a gunshot in the Seattle Chinatown-International District.

Critics argue that more needs to be done to address the rising crime rate, but when Seattle City Attorney Ann Davison announced a change in policy to make charging decisions against all accused within five days, she was met with opposition, particularly from City Councilmember Andrew Lewis, who argued that repeat offenders who are routinely prosecuted for minor offenses will continue to offend.

'With all due respect to our mayor, the situation is much worse than I believe many people anticipated,' she added, adding, 'I'm so weary of hearing this plan and their false promises.' We need to be honest with one another: we're in a mess.'