China is building a global genetic database, according to intelligence agencies, which could give it control of the US health-care industry and a significant military advantage

China is gathering genetic data from all across the world, according to intelligence sources, as part of a technology push that might give it a decisive military advantage and dominion over the American healthcare sector.

The National Counterintelligence and Security Center published a report that offered a bleak picture of the dangers that firms and universities face when accepting Chinese money or expertise.

It's the latest in a series of warnings that the United States is at risk of falling behind as China accelerates its research.

Chinese corporations are investing in biotechnology and pharmaceutics in the United States and Europe, according to Edward You, the center's officer for emerging and disruptive technologies.

He added they were also giving genetic testing and COVID-19 test kits, accumulating information that may end up in Beijing's hands.

Beijing, he added, might one day be dominant in health care due to its data collecting and technological developments, leaving the United States completely reliant on China.

'If you're President Xi,' he said, 'that's the gift that keeps on giving.' 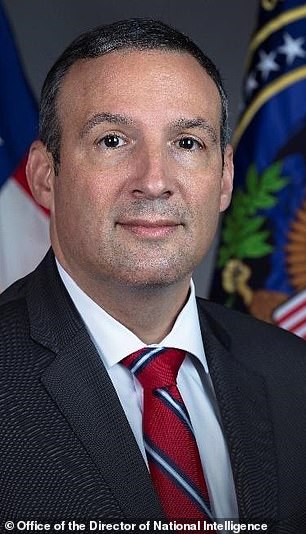 Michael Orlando, the acting director of the counterintelligence center, told reporters that the US 'can't afford to lose' ground to China in many crucial sectors, including artificial intelligence, autonomous systems, quantum computing, semiconductors, and biotechnology.

He claimed that Chinese corporations and academics were obligated to support the Chinese Communist Party's interests.

'Although we've been saying this for year after year, people are not digesting this,' he said.

The warning comes soon after reports that China tested a hypersonic missile and after key Pentagon officials left their posts saying they feared the U.S. was being left behind.

The new report details threats against the private sector in particular.

American officials have repeatedly warned that China was closing the gap on areas like A.I.

Those warnings intensified this week when it emerged that it had tested a hypersonic missile, using a type of technology that can evade early warning systems.

Orlando went on to say that quantum computing was an area where the US needed to make sure that American companies weren't accidentally assisting China in developing technologies that could breach spy agencies' encryption systems.

Last week, the top Pentagon official in charge of overseas arms sales announced her departure a day after warning that the United States' restrictions on sharing technology have allowed strategic competitors to control the market in the Middle East for military hardware.

Heidi Grant did not need to reference China specifically in her remarks to the Association on Tuesday.

Her resignation came days after the Pentagon's first chief software officer said he resigned because he could not bear to watch China overtake the U.S.

The departures come with tensions high between Washington and Beijing, with both sides jockeying over the status of Taiwan.

Grant's departure was announced with a notice on the Defense Security Cooperation Agency website, saying she 'had been considering this transition for some time.'

A day earlier she warned that the U.S. needed to consider whether blocking arms sales to allies would leave the market to 'strategic competitors.'

'We have to look at this and say, if we're not there, our strategic competition is going to fill the void,” she said, according to Defense One. 'And is that riskier than transferring our high-end technologies?'

Grant, the first civilian to lead the agency, referred specifically to controversy over arms sales to Jordan, Saudi Arabi and the United Arab Emirates.

Concerns that shipments permitted by the Trump administration would be utilized in Yemen, where air attacks have been blamed for civilian deaths, prompted the incoming Biden government to initiate a review of such sales.

Prior to Trump, the worldwide Missile Technology Control Regime restricted the sale of big drones like the MQ-9 Reaper to close allies like NATO members France and the United Kingdom.

'Our policies of the time were, we're not going to transfer that technology,' said Grant.

'So guess what? Our strategic competitor transferred that technology, and have a significant footprint of training bases for unmanned [drones] in Jordan, Saudi Arabia, UAE.

A Pentagon spokesperson told DailyMail.com her departure had been in the works before her remarks.

'Director Grant’s retirement announcement is in no way connected to her AUSA conference panel comments,' said Michael Howard.The Stockholm International Peace Research Institute outlined the rise of Chinese sales to the region in a paper earlier this year.

Although worldwide armament sales have leveled off, transfers from China to Saudi Arabia and the United Arab Emirates have more than doubled between 2011 and 2020.

Grant's retirement occurred only days after another senior officer resigned, citing concerns that China was catching up to the US in military technology.

Nicolas Chaillan told the Financial Times that he departed because of the military's delayed technological modernization.'We have no competing fighting chance against China in 15 to 20 years. Right now, it’s already a done deal; it is already over in my opinion,' said Chaillan, who spent three years on a Pentagon-wide effort to improve cyber security.

He said Beijing was on its way to global dominance because of its advances in artificial intelligence, cyber capabilities and machine learning.

Those were more important, he added, than new hardware such as the F-35 warplane.

In contrast, he described cyber defenses in some government department as 'kindergarten level.'

More from: USAGAG
1
Joe, how's it doing with'shutting down the virus'?
2
Which is more important: Work or Welfare?
3
According to IRS data, Trump's tax cuts benefited the ...
4
Kamala Harris has labeled her employer as a 'bully' ...
Filed under China ,  genetic database

Most Popular This Week
1
What Life Is Like After the Niqab for French ...
2
A Guide to Leftist Destruction in a Nutshell
3
Could China's massive public debt put the world economy ...
4
Joe, how's it doing with'shutting down the virus'?
5
According to IRS data, Trump's tax cuts benefited the ...
6
Kamala Harris has labeled her employer as a 'bully' ...
7
Finding Use in the Dark Economy—and Minimizing Its Negative ...
8
Officer Edward Shames, the last of WWII's 'Band of ...
9
California Will Likely Face Fiscal Crisis Sooner Rather Than ...
10
Black Lives Matter calls boycott of ‘white companies’