Five rioters in the Capitol represent themselves in court: a yoga instructor who doubts the investigation, a defendant who attempted to defame the judge's wife, and a woman who believes the court has no authority

At least five persons accused of storming the US Capitol have refused to hire a lawyer and are opting to represent themselves, despite the fact that they lack legal experience and have been warned repeatedly by courts.

That decision has already resulted in some unusual legal tactics and unpleasant courtroom discussions.

Alan Hostetter, 57, a cop-turned-yoga teacher, is one of the five who has decided to go it alone because he believes the official investigation into the incident is rigged.

Brandon Fellows, 27, is also representing himself. He attempted to have the judge presiding over his case removed by bringing up a tactic he'd used in separate judicial procedures in New York.

That entailed him obtaining the phone number of the other judge's wife and entering it as his own on his contact form, in the hopes that the alleged relationship would bring the matter to a close. Fellows has yet to make that motion in the riot case, despite being warned that doing so could result in his being detained once more.

Meanwhile, Pauline Bauer is defending herself because she feels the US judicial system has no right to try her, and she plans to make that point apparent in court. 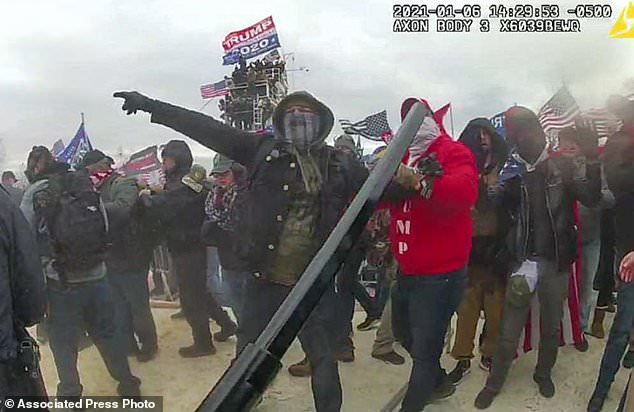 Brian Christopher Mock, center, is seen in a photograph caught on police body worn camera on the West Front of the United States Capitol in Washington, according to the criminal complaint. Mock is one of at least five people charged in the Capitol riot who have opted to represent themselves in court, despite federal judges' repeated cautions about the dangers of attempting to negotiate their high-stakes cases without legal representation.

The right to self-representation is a fundamental constitutional value. However, a longstanding judge warned a former California police chief that if he represented himself, he'd have 'a fool for a client,' citing an old saying, with many of those who've elected to represent themselves for self-representation now likely to trip themselves up. 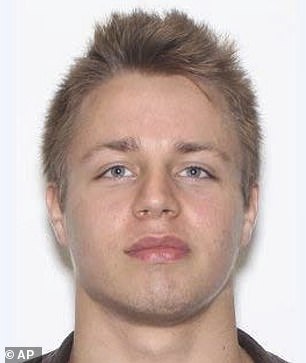 Brandon Fellows, 27, is another who has chosen to defend themselves in court without a lawyer

'Just because you have a constitutional right to do something doesn't necessarily mean it's sensible,' said Michael Magner, a New Orleans criminal defense lawyer and former federal prosecutor.

The choice by at least five defendants to defend themselves will undoubtedly present a number of difficulties, particularly for those who are currently incarcerated. If they state something in court that isn't true, they risk finding themselves into even more legal difficulty. They must sift through the avalanche of evidence gathered by investigators during the incident. The technique is already putting judges' control over their courtrooms to the test.

'I would never represent myself if I were charged with a crime,' U.S. District Judge Royce Lamberth told Alan Hostetter before allowing him to handle his own defense against riot charges. The judge warned the ex-police chief that he has never seen anyone successfully represent himself since his appointment to the bench in 1987.

Hostetter, 56, and five other men were arrested in June on allegations of conspiring to prevent Congress from declaring Joe Biden's victory in the presidential election. Four of Hostetter's co-defendants are linked to the Three Percenters, a militia wing, according to the indictment.

After more than 20 years as an officer, Hostetter began teaching yoga and told Lamberth that one of the reasons he wants to represent himself is the 'corruption of this inquiry.' His financial situation was also an issue. 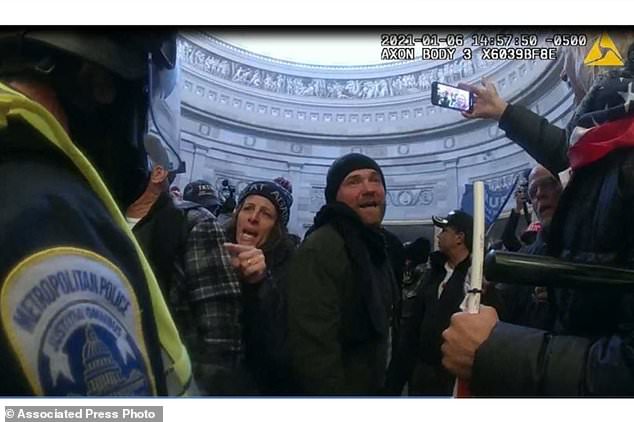 This image from Metropolitan Police Department body worm camera video and contained in the Statement of Facts supporting an arrest warrant for Pauline Bauer, pointing second to left, taken in the Rotunda of the U.S. Capitol. She is representing herself in court 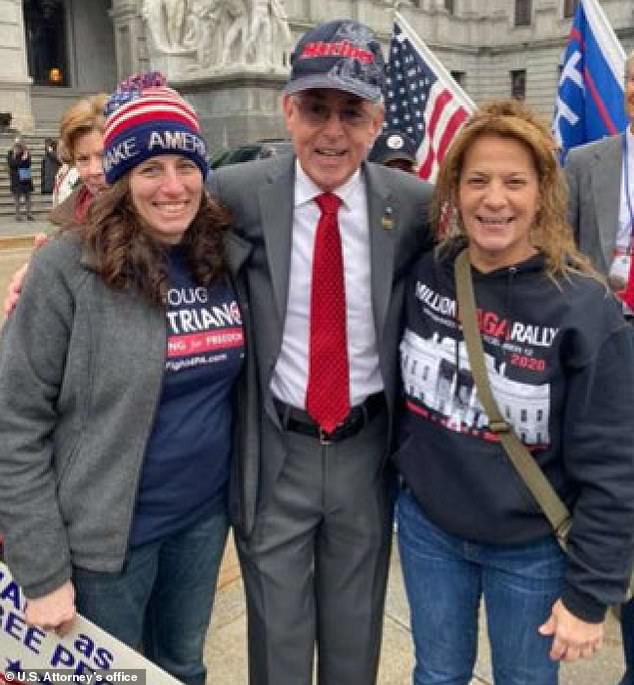 Pauline Bauer (left), who stormed the Capitol on January 6 and allegedly threatened to lynch House Speaker Nancy Pelosi, has claimed in court that she has immunity from the law thanks to 'divine empowerment'

'I believe that it's a governmental strategy and tactic that if they can't convict you, they at least want to bankrupt and destroy you,' Hostetter said.

Video shows Fellows, who was photographed wearing a fake orange beard during the riot, with his feet propped on a table in the office of Sen. Jeff Merkley, D-Ore. Fellows was locked up this summer for missing a mental health evaluation appointment and harassing a probation officer.

Fellows, 27, took the stand to argue for his release, brushing aside warnings from the judge that he could open himself to perjury charges if he testified.

In doing so, Fellows may have compounded his legal troubles. 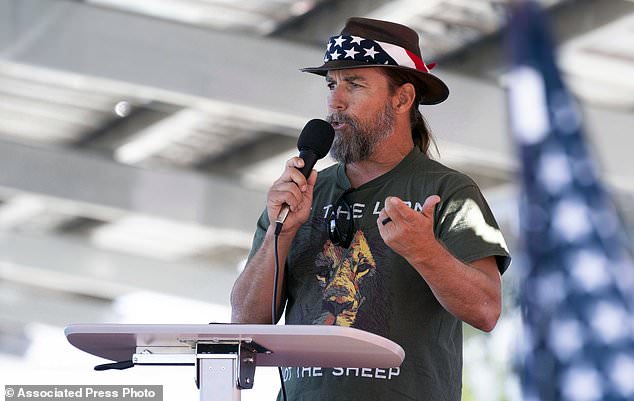 Alan Hostetter, 56, speaks during a pro-Trump election integrity rally he organized at the Orange County Registrar of Voters offices in Santa Ana, California in November 2020. Hostetter has decided to represent himself in  court without the expertise of an attorney

Fellows told McFadden that he used what he described as a 'loophole' he had read about online to disqualify a different judge overseeing an unrelated case in New York. Fellows said he listed a phone number for that judge's wife as his own number in court records to make it appear that he knows the woman.

Fellows claimed he also asked his public defender, who defended him before he dismissed counsel in the riot case, if he should try to replace McFadden by contacting the judge's family, but the lawyer cautioned him that doing so might get him arrested.

In dismissing Fellows' request for parole, McFadden admitted to obstructing justice in the New York case and said he would examine it in his riot case.

Last month, McFadden, who was nominated by President Donald Trump, jailed self-represented defendant Pauline Bauer for refusing to cooperate with probation authorities during her pretrial release.

Bauer was arrested in May along with a friend who joined her at the Capitol. Video from a police officer´s body camera captured Bauer saying to bring out House Speaker Nancy Pelosi, D-Calif., to be hanged, the FBI says. 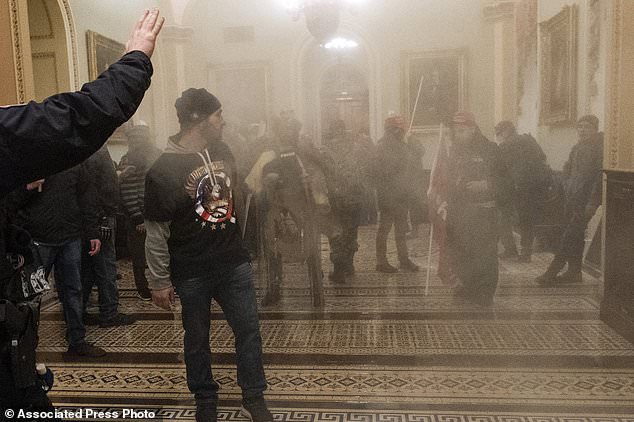 As supporters of President Donald Trump, including Eric Bochene, far right, are accosted by US Capitol Police officers inside, smoke fills the path outside the Senate Chamber. At least five persons, including Bochene, have said they will not hire a counsel in court.

Bauer, who operates a restaurant in rural Kane, Pennsylvania, has routinely disrupted proceedings. She has also claimed in vain that the court has no jurisdiction over her, exhibiting an attitude that appears to align with the radical movement known as "sovereign citizens."

During a July 19 hearing, Bauer told McFadden that she doesn´t want 'any lawyering from the bench.' When the judge denied her request to dismiss her charges, she asked, 'On what terms?'

'You don´t get to demand terms from me,' replied McFadden. McFadden appointed lawyers to serve as standby counsel for Fellows and Bauer and assist at the defendants' request.

After U.S. District Judge Randolph Moss ruled last month that Eric Bochene can represent himself, the upstate New York man submitted a 'fee schedule' in which he appeared to be attempting to create a structure for him to collect fees for working on his own case. 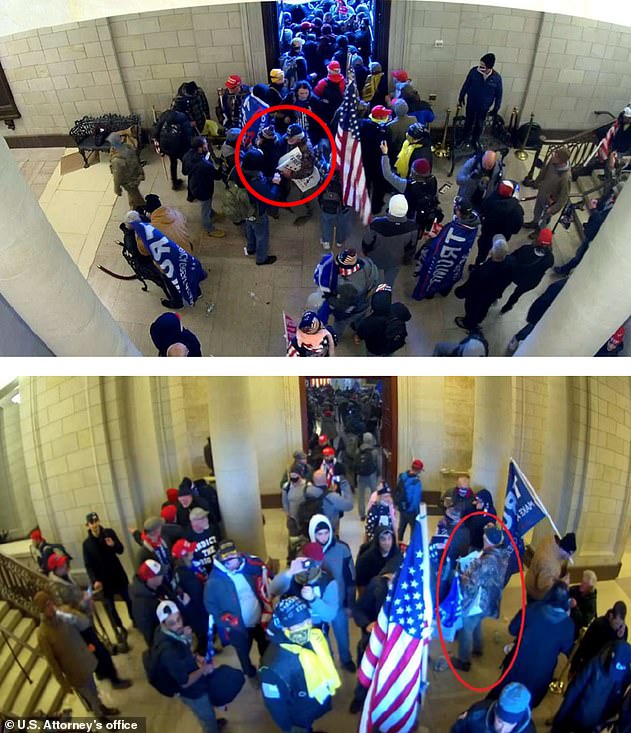 Texts, Facebook posts and video grabs from the FBI placing Pauline Bauer in the midst of the Capitol insurrection on January  6th, 2021 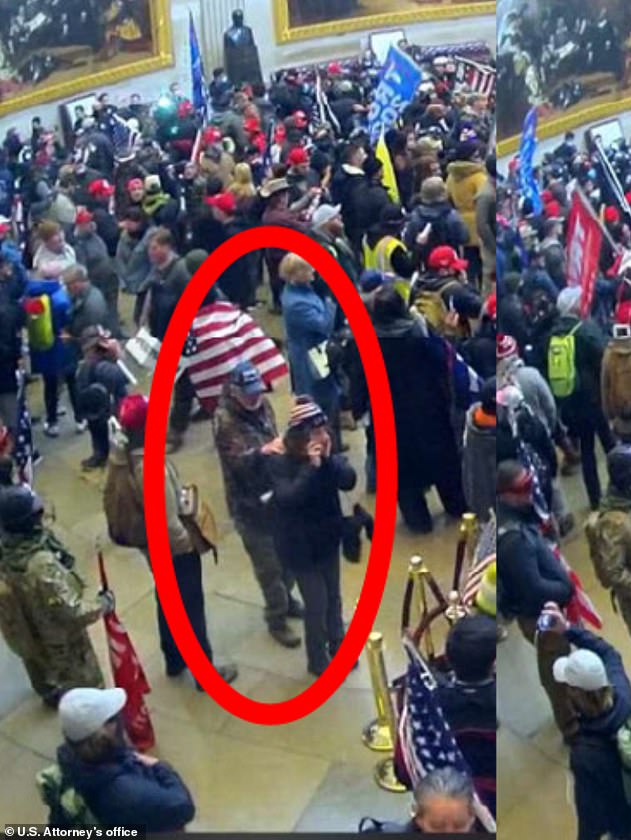 In a series of photographs, Bauer could be seen entering the Capitol rotunda 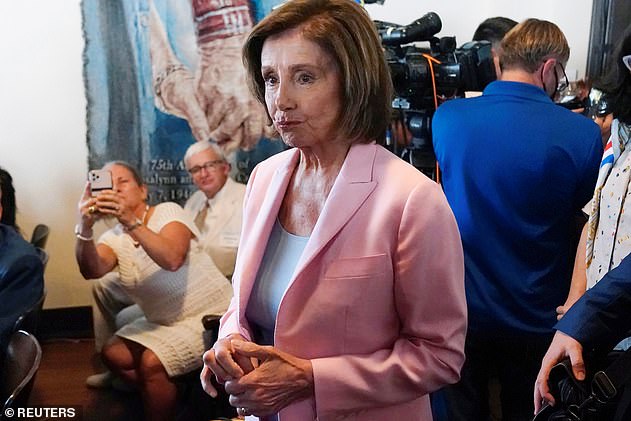 It's alleged that while she was in the Capitol rotunda Bauer told police that she wanted to kill House Speaker Nancy Pelosi, pictured 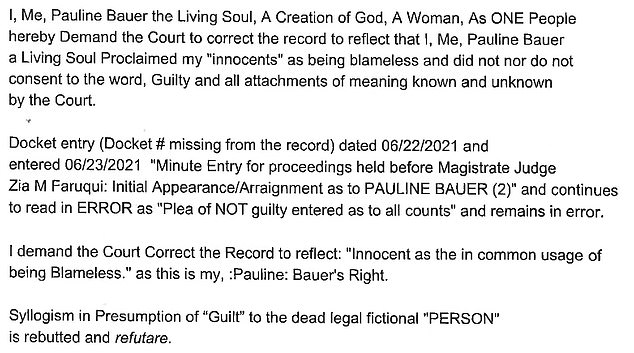 Earlier this year, Bauer filed court documents that she claimed freed her from government control

The filing indicates he wants to charge up to $250,000 for spending two hours in court if he feels he is appearing 'under protest and duress' and $50,000 if he is there voluntarily. A 'forced giving of bodily fluids' carries a $5 million charge under Bochene's billing schedule.

The judge denied the request, noting that Bochene hasn't been ordered to take any actions requiring payment. 'Furthermore, to the extent Defendant is seeking payment for appearing in Court, that argument lacks merit,' said the judge's terse order.

According to court records, Brian Christopher Mock, a fifth riot defendant, began representing himself last month after being represented by an associate federal public defender. After returning home to Minnesota, Mock boasted about assaulting police officers and trashing property at the Capitol, according to a tip to the FBI.

The violence has resulted in the arrest of over 640 persons. Several instances have already been handled, with sentences ranging from probation to less than a year in prison. If convicted, some people accused with the most serious offenses, such as conspiracy instances involving members of extremist groups, might face years in prison. 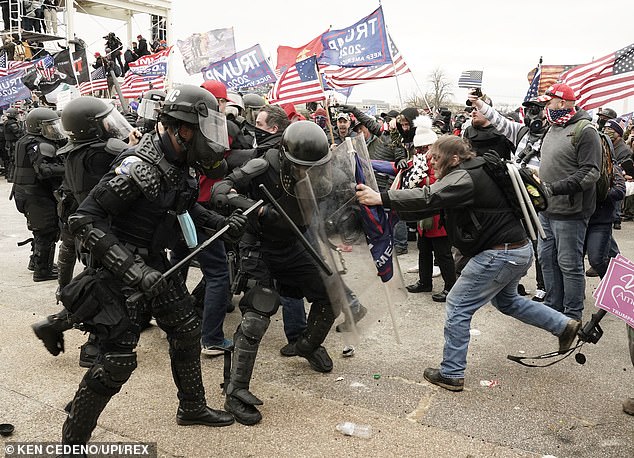 It can be a challenge for judges to maintain their composure and control of their courtrooms when a defendant isn´t represented by a lawyer.

'The court will often wind up bending over backwards to make sure that people don't make their situations worse by wanting to be their own Perry Mason,' Magner said.

New York civil rights lawyer Ron Kuby, who has served as standby counsel for about a dozen self-represented defendants, has practiced law for nearly 40 years and never seen one such defendant secure an acquittal. But a favorable verdict isn´t always their primary objective, he said, adding that sometimes a defendant wants to use a trial to make a political point.

He said laypeople shouldn´t represent themselves for the same reason that lawyers shouldn´t, either.

'You don´t have objectivity,' Kuby said. 'You need to to be able to look at the case in an objective way, which is hard to do when you feel you´re being criminalized for preventing an illegitimate president from seizing power, however crazy that may sound.' 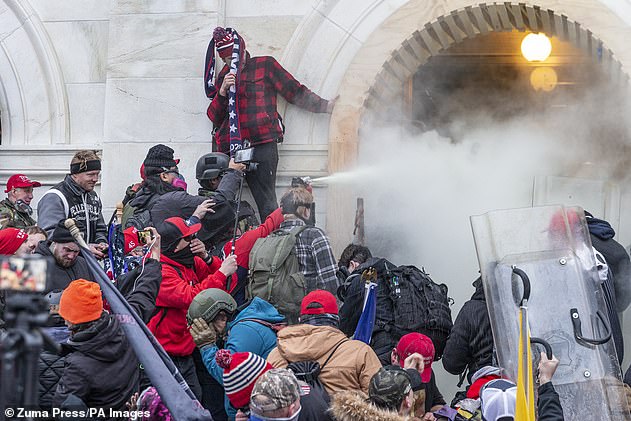 (When rioters clash with police while attempting to enter the Capitol building through the front doors, they use tear gas. In an attempt to overturn the results of the 2020 election, rioters destroyed windows and broke into the Capitol building. The gathering was finally dispersed by police using buttons and tear gas grenades. The cops were also attacked with metal bars and tear gas by rioters.)

More from: USAGAG
1
Joe, how's it doing with'shutting down the virus'?
2
Which is more important: Work or Welfare?
3
According to IRS data, Trump's tax cuts benefited the ...
4
Kamala Harris has labeled her employer as a 'bully' ...
Filed under Rioters capitol ,  us riots capitol ,  United States Capitol ,  January 6 Capitol Riot Arrests

Most Popular This Week
1
What Life Is Like After the Niqab for French ...
2
A Guide to Leftist Destruction in a Nutshell
3
Could China's massive public debt put the world economy ...
4
Joe, how's it doing with'shutting down the virus'?
5
According to IRS data, Trump's tax cuts benefited the ...
6
Kamala Harris has labeled her employer as a 'bully' ...
7
Finding Use in the Dark Economy—and Minimizing Its Negative ...
8
Officer Edward Shames, the last of WWII's 'Band of ...
9
California Will Likely Face Fiscal Crisis Sooner Rather Than ...
10
Black Lives Matter calls boycott of ‘white companies’