Who is Harriet Tubman ?

'I was the conductor of the Underground Railroad for eight years, and I can say what most conductors can't say — I never ran my train off the track and I never lost a passenger.' ~Harriet Tubman

Perhaps one of the best known personalities of the Civil War, Harriet Tubman was born into slavery as Araminta Ross, on the Eastern Shore of Maryland, sometime in 1820 or 1821. As a child, Tubman was “hired out” to various masters who proved to be particularly cruel and abusive to her. As a result of a head injury caused by one of these men, she suffered from seizures and “visions” for the rest of her life, which she believed were sent from God.

In 1840, Tubman’s father was freed as a result of a stipulation in his master’s will, but continued to work for his former owner’s family. Although Tubman, her mother, and her siblings were also supposed to be freed, the law was ignored and they remained enslaved. Tubman married a free black in 1844, and changed her first name from Araminta to Harriet. 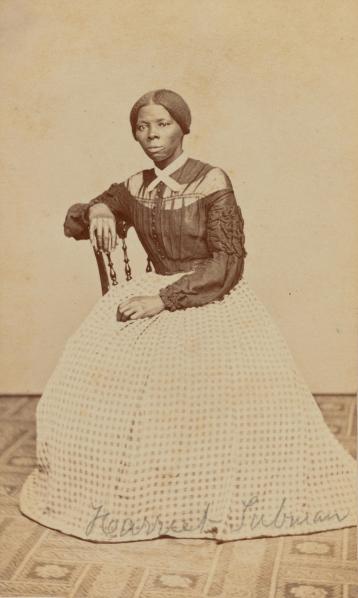 In 1849, Tubman became seriously ill with complications from her head injury, and her owner decided to sell her, but could not find a buyer. After her owner’s sudden death, the family began selling off all of the slaves. Not wanting to have her family separated, Tubman was determined to escape. A first attempt, in which Tubman was accompanied by her brothers, was aborted when they had second thoughts. Tubman decided to try again on her own, and she escaped via the Underground Railroad into Pennsylvania.

Tubman settled in Philadelphia and was able to support herself doing odd jobs. But in 1850, word came that her niece and her two children were to be sold. Tubman was determined to help, and went back to Maryland. With the assistance of her brother-in-law, Tubman was able to bring her niece and the two children back safely to Philadelphia. This was the first of many trips that Tubman would make to lead family members and others to freedom. On one expedition, Tubman contacted her husband in the hopes that he would follow her to Pennsylvania, but he had remarried and preferred to remain in Maryland.

Over the course of 11 years, Tubman rescued over 70 slaves from Maryland, and assisted 50 or 60 others in making their way to Canada. During this time, her reputation in the abolitionist community grew, and she became acquainted with Frederick Douglass and John Brown. She also moved her base of operations to Auburn, New York, closer to the Canadian border. Tubman conducted her last rescue mission in November 1861, as the Civil War enveloped the nation.

Tubman offered her services to the Union Army, and in early 1862, she went to South Carolina to provide badly needed nursing care for black soldiers and newly liberated slaves. Working with General David Hunter, Tubman also began spying and scouting missions behind Confederate lines. In June of 1863, she accompanied Colonel James Montgomery in an assault on several plantations along the Combahee River, rescuing more than 700 slaves. Her deed was celebrated in the press and she became even more famous.

With the end of the war, Tubman returned to Auburn, NY and married a Civil War veteran. Although her service in the Union Army was much publicized, she had great difficulty in getting a pension from the government, but was eventually awarded a nurse’s pension in the 1880s. She did not stay idle in her later years, taking on the cause of women’s suffrage with the same determination she had shown for abolition.

Tubman established the Harriet Tubman Home for the Aged on a property adjacent to her own. After undergoing brain surgery to try to alleviate the symptoms from the head injury that had plagued her since childhood, and being essentially penniless, Tubman was forced to move into the home herself in 1911. She died there on March 10, 1913, surrounded by family and friends. She was buried with military honors at Fort Hill Cemetery in Auburn.

"Every great dream begins with a dreamer. Always remember, you have within you the strength, the patience, and the passion to reach for the stars to change the world." ~Harriet Tubman