Some mysteries take generations to unfold.

In February 1959, a group of nine hikers crossed through Russia's Ural Mountains as part of a skiing expedition. The experienced trekkers, all employed at the Ural Polytechnical Institute, were led by Igor Dyatlov. On the evening of February 1, all nine appear to have fled their tents into the Arctic temperatures, for which they were unprepared. None survived.

Six of the members died of hypothermia; three suffered from physical trauma. Some members were missing body parts—a tongue here, a few eyes there, a pair of eyebrows for good measure. According to reports, no hiker appears to have struggled or panicked. They were likely too quickly overtaken by the hostile environment in Western Russia.

All the members were young, mostly in their early twenties; one member, Semyon Zolotaryov, was 38. Good health didn't matter. Given the uncertain circumstances—what made them flee into the bitter cold?—the incident known as Dyatlov Pass has long been the type of Area 51-conspiracy theory that some people love to speculate about. A vicious animal attack? Infrasound-induced panic? Was the Soviet military involved? Maybe it was the katabatic winds that did them in. Local tribesmen might not have liked the intrusion.

Or perhaps it was aliens. Or a Yeti. Have we talked about Yeti aliens yet?

These theories and more have been floated for decades.

a: Last picture of the Dyatlov group taken before sunset, while making a cut in the slope to install the tent. b: Broken tent covered with snow as it was found during the search 26 days after the event.

Finally, a new study, published in the Nature journal Communications Earth & Environment, has put the case to rest: it was a slab avalanche.

This theory isn't exactly new either. Researchers have long been skeptical about the avalanche notion, however, due to the grade of the hill. Slab avalanches don't need a steep slope to get started. Crown or flank fractures can quickly release as little as a few centimeters of earth (or snow) sliding down a hill (or mountain).

As researchers Johan Gaume (Switzerland's WSL Institute for Snow and Avalanche Research SLF) and Alexander Puzrin (Switzerland's Institute for Geotechnical Engineering) write, it was "a combination of irregular topography, a cut made in the slope to install the tent and the subsequent deposition of snow induced by strong katabatic winds contributed after a suitable time to the slab release, which caused severe non-fatal injuries, in agreement with the autopsy results."

Conspiracy theories abound when evidence is lacking. Twenty-six days after the incident, a team showed up to investigate. They didn't find any obvious sounds of an avalanche; the slope angle was below 30 degrees, ruling out (to them) the possibility of a landslide. Plus, the head injuries suffered were not typical of avalanche victims. Inject doubt and crazy theories will flourish. 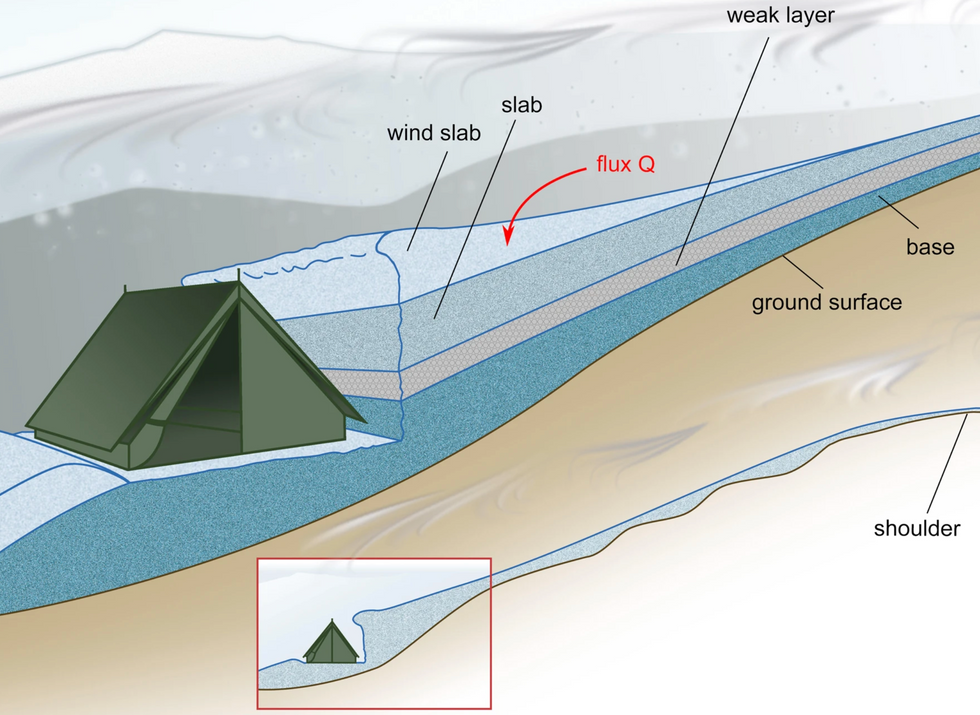 Configuration of the Dyatlov tent installed on a flat surface after making a cut in the slope below a small shoulder. Snow deposition above the tent is due to wind transport of snow (with deposition flux Q).

Add to this Russian leadership's longstanding battle with (or against) the truth. In 2015 the Investigative Committee of the Russian Federation decided to reopen this case. Four years later the agency concluded it was indeed a snow avalanche—an assertion immediately challenged within the Russian Federation. The oppositional agency eventually agreed as well. The problem was neither really provided conclusive scientific evidence.

Gaume and Puzrin went to work. They provided four critical factors that confirmed the avalanche:

Case closed? It appears so, though don't expect conspiracy theories to abate. Good research takes time—sometimes generations. We're constantly learning about our environment and then applying those lessons to the past. While we can't expect every skeptic to accept the findings, from the looks of this study, a 62-year-old case is now closed.