This is your brain on political arguments

Debating is cognitively taxing but also important for the health of a democracy—provided it's face-to-face.

You probably know the feeling: a rush of heat that assaults your entire body; your fingertips and forehead suffering fiery consequences of conflict; restrictions around your chest and throat; quickened breath, as if your lungs can no longer draw in the required oxygen; ears on alert, biding time for a break in your opponent's rhetoric to let loose the torrent of thoughts crowding your brain.

Of course, not everyone is an opponent. You likely know the opposite as well: the cool excitement of agreeableness, when the words in your head are returned to you from another being as in a mirror; unconscious head shaking as your sense of righteousness is validated; the warm exuberance of easy dialogue with a fellow tribe member.

In a digital age in which physical contact seems foreign and long past, we might have forgotten what it's like to agree—or debate—with someone in person. Pandemics are temporary, while societies are—well, nothing is forever, but we've outlived diseases before. According to new research from Yale University, published in Frontiers in Human Neuroscience, disagreeing with someone takes up a lot of brain real estate, while finding a compatriot is a much less cognitively taxing endeavor.

For this study, researchers gathered 38 adults to ask their feelings on contentious topics like same-sex marriage and cannabis legalization. They then matched each volunteer with people who either agreed or disagreed. Every subject had their brain scanned with functional near-infrared spectroscopy during these face-to-face discussions, during which time they were given a total of 90 seconds to discuss a topic in 15-second increments.

There are two kinds of identity politics. One is good. The other, very bad. | Jonathan Haidt

Unsurprisingly, harmonious synchronization of brain states occurred when volunteers agreed, similar to group flow—the coordination of brain waves that hip-hop and jazz musicians (among others) experience when performing together. Coordination exceeds the social, into the neurological. As the team writes, "talking during agreement was characterized by increased activity in a social and attention network including right supramarginal gyrus, bilateral frontal eye-fields, and left frontopolar regions."

Senior author Joy Hirsch notes that our brain is essentially a social processing network. The evolutionary success of humans is thanks to our ability to coordinate. Dissonance is exhausting. Overall, she says, "it just takes a lot more brain real estate to disagree than to agree," comparing arguments to a symphony orchestra playing different music.

As the team notes, language, visual, and social systems are all dynamically intertwined inside of our brain. For most of history, yelling at one another in comment sections was impossible. Arguments had to occur the old-fashioned way: while staring at the source of your discontent. 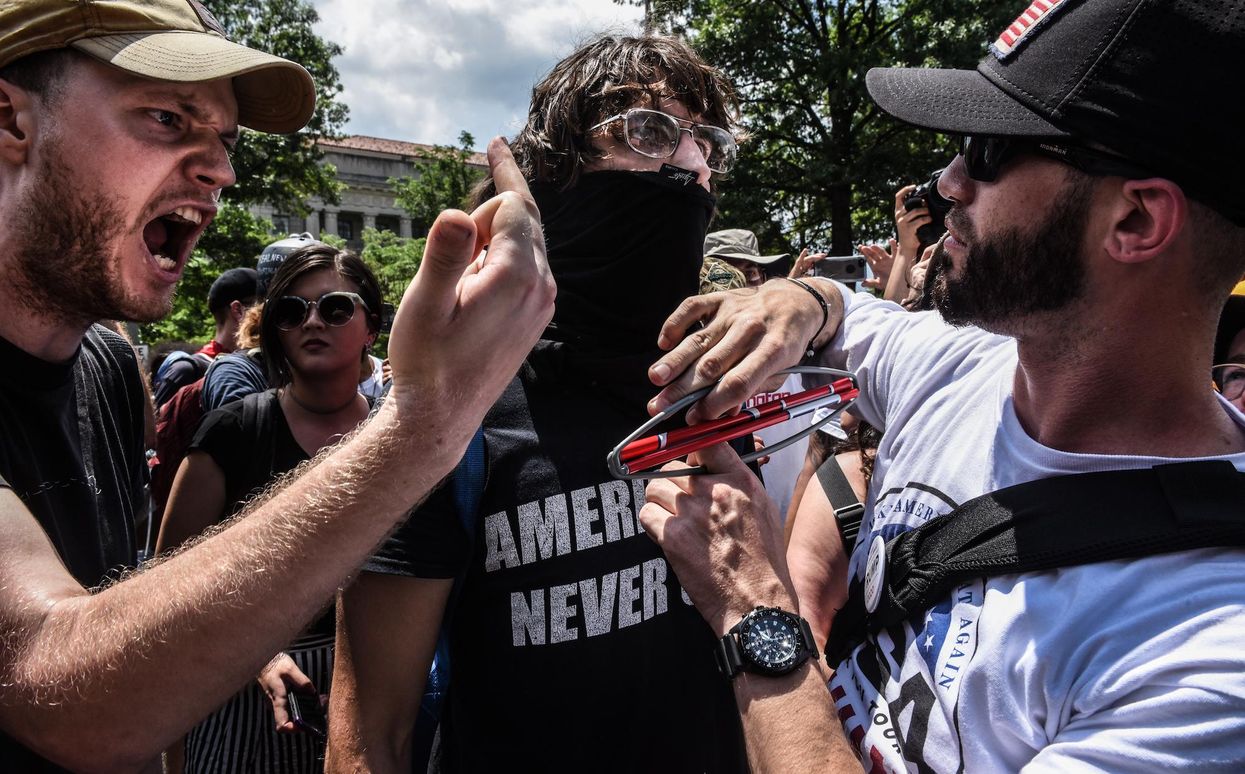 People of the "left-wing" side yell at a Trump supporter during a "Demand Free Speech" rally on Freedom Plaza on July 6, 2019 in Washington, DC.

Leading us to an interesting question: do the same brain regions fire when you're screaming with your fingers on your Facebook feed? Given the lack of visual feedback from the person on the other side of the argument, likely not—as it is unlikely that many people would argue in the same manner when face-to-face with a person on the other side of a debate. We are generally more civil in real life than on a screen.

The researchers point out that seeing faces causes complex neurological reactions that must be interpreted in real-time. For example, gazing into someone's eyes requires higher-order processing that must be dealt with during the moment. Your brain coordinates to make sense of the words being spoken and pantomimes being witnessed. This combination of verbal and visual processes are "generally associated with high-level cognitive and linguistic functions."

While arguing is more exhausting, it also sharpens your senses—when a person is present, at least. Debating is a healthy function of society. Arguments force you to consider other viewpoints and potentially come to different conclusions. As with physical exercise, which makes you stronger even though it's energetically taxing, disagreement propels societies forward.

In this study, every participant was forced to listen to the other person. As this research was focused on live interactions, it adds to the literature of cognitive processing during live interactions and offers insights into the cognitive tax of anger. Even anger is a net positive when it forces both sides to think through their thoughts and feelings on a matter. As social animals, we need that tension in our lives in order to grow. Yelling into the void of a comments section? Not so helpful.