China opens its doors to global banking firms, but will they be successful?

Forget China: The United States' 18 intelligence agencies have issued the first-ever warning about the threat of climate change

China is building a global genetic database, according to intelligence agencies, which could give it control of the US health-care industry and a significant military advantage

Want to tell someone's future in the US? You don't need a crystal ball, just their zip code.

New York City is a vibrant, vivacious city. No one knows this better than the people who live on its Upper East Side. Residents of this Manhattan neighborhood enjoy easy access to Central Park, a panoply of top-tier restaurants and markets, and some of the country's most renowned museums and cultural venues. But the real perk to calling the Upper East Side home is measured in years.

Upper East Side residents maintain an average life expectancy of 86.4 years, a number on par with the most peaceful, prosperous countries in the world. For a population to enjoy so many precious years represents historic achievements in education, infrastructure, and health care. Yet these hard-won achievements have not been distributed equally. A mere 15 miles away, in the Brooklyn neighborhood of Brownsville, the average life expectancy is a full decade shorter. 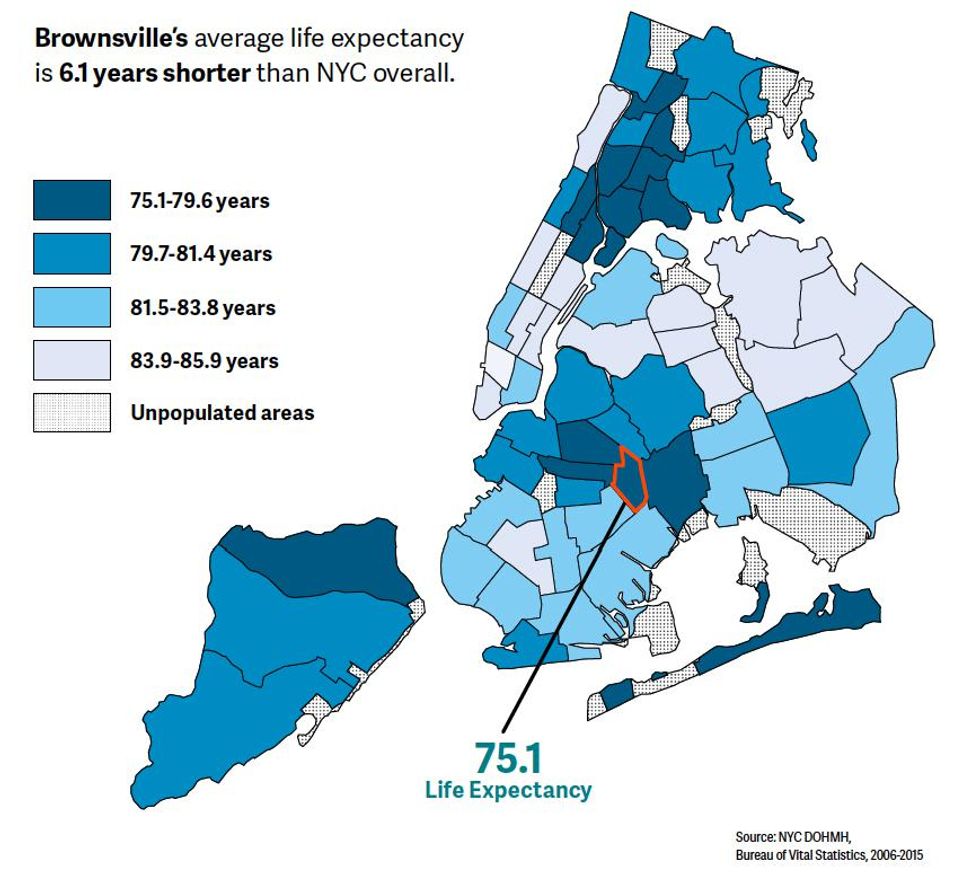 Just 15 miles from Brownsville, Brooklyn, residents of the Upper East Side in Manhattan have an average life expectancy of 86.4 years.

Such life-expectancy gaps are common across the United States. Residents of Chicago's Streeterville neighborhood can rest easy knowing they will live to be, on average, 90 years old. Chicago's Englewood neighborhood, however, maintains a life expectancy of around 60 years. That's ten years lower than the world average—in the world's most affluent country. The phenomenon is not just an urban affliction. On the whole, rural community members have lower life expectancies as they become more likely to die from these five leading causes than their city-dwelling peers.

While it may be tempting to write off these life gaps as the result of lifestyle choices or bad luck, they aren't. They are the consequences of a complex intersection between social, environmental, and cultural conditions that fall under 'social determinants of health.'

You can have the best treatments, the best physicians, the best facilities, but unless a patient's non-clinical needs are addressed, none of it will make a difference.

Social determinants of health are those conditions in a person's life and environment that can either aid or degrade their health. They include employment, education, food availability, living conditions, communal support, neighborhood quality, socioeconomic status, and the wider systems that surround these conditions. When such determinants aren't wholesome, they erode health long before someone enters a hospital—at which point, health professionals may have only minutes to turn the tide of years of eroded health.

As Udai Tambar, vice president for community health at Northwell Health, said, "You can't medicate for social issues, and that's, in a way, the system we have developed. We're trying to medicate for social risks and social factors. You can have the best treatments, the best physicians, the best facilities, but unless a patient's non-clinical needs are addressed, none of it will make a difference."

Today, experts generally agree that 20 percent of health outcomes are derived from the care received at medical facilities, 80 percent from the non-clinical care attributed to one's lifestyle, environment, and social circumstances.

The data bear this out. U.S. health-care spending has nearly quadrupled since 1980, and the country has invested that bankroll heavily in hospitals, nursing facilities, prescription drug development, and medical specialist training. Each is valuable in its own right, yet as a systematic whole, this massive, decades-long investment has not netted proportionate health dividends. In addition to country-wide life gaps, the U.S. has one of the lowest life expectancies, the highest suicide rate, the highest chronic disease burden, and the highest obesity rate when compared to other major OECD nations.

These other OECD countries don't spend more on health than the United States. In terms of absolute dollars, the U.S. handily outspends these countries. Instead, these countries spend a larger portion of their GDP on social services, helping to mitigate deleterious social determinants long before a hospital visit. By one estimate, other major OECD countries allot, on average, $1.70 for social spending for every dollar on health. The U.S. system is almost the inverse, spending .56 cents on social services for every dollar on health.

"You need social equity to get health equity," Tambar added.

There’s no pill to cure poverty

This pattern of spending is one reason for the U.S. health-wealth divide, a pernicious and destructive social determinant of health. We've seen this divide's handiwork in the life expectancy differences between the Upper East Side and Brownsville, but those are samples of a whole. According to a 2017 paper in The Lancet, the "life expectancy of the wealthiest Americans now exceeds that of the poorest by 10-15 years." And these life-gap metrics signal the end consequences of a myriad of unmet social needs.

Consider the health barriers common in impoverished areas, where residents lack access to healthy, affordable food. Limited funds make it impossible to update or maintain safe housing without mold or lead-contaminated paint or water pipes. Narrow or nonexistent transportation options cut off residents from employment opportunities or health-care access. And being surrounded by street crime, unsafe public spaces or no greenways generates sustained high stress, which research shows grinds away at our physical health as fiercely as it does our mental wellbeing.

Each of these conditions is bitter in and of itself, but these social determinants often come packaged as part of a social circuit that magnifies the effects of each.

Unfortunately, dietary fads and the U.S.'s rugged individualism have loudly espoused health to be the culmination of lifestyle choices (for some, even moral rectitude). While lifestyle and choice certainly have their role, an understanding of these social determinants shows how inextricably tied our choices are to our social conditions. As Tambar points out, a person can be well-versed in nutrition, but if their neighborhood is a food desert, their choices are constrained. Social circumstances can limit or adversely influence health in inimical ways.

As Dr. Mary Travis Bassett, Director of the FXB Center for Health and Human Rights at Harvard University, told Big Think: "Nobody picks a substandard building to live in with terrible issues of rodent infestation and indoor allergens that trigger asthma. That's not a lifestyle choice. […] It's not about choice; it's about the fact that people don't have enough choice."

Going to the source 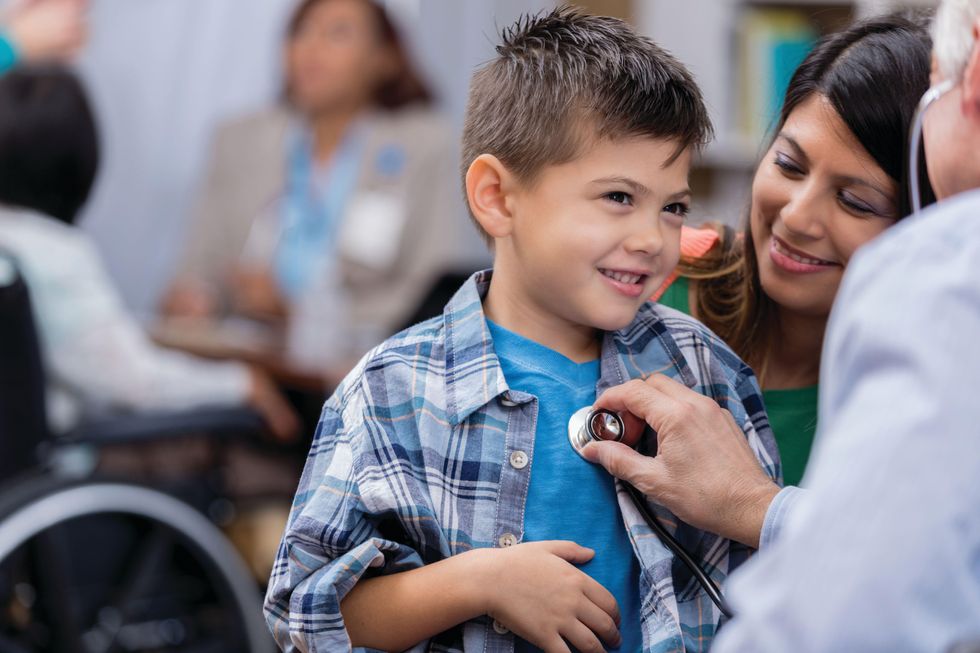 Negative social determinants of health provide a massive challenge to the health-care community, but experts and medical professionals aren't powerless to meet it. As Michael Dowling, CEO of Northwell Health, writes in his book "Health Care Reboot":

This trend toward greater awareness of the social determinants of health is one of the most encouraging developments in health care, for it creates greater awareness among providers of the whole patient, including all of the various elements—most of them outside what might be considered strictly medical issues—that affect an individual's overall health and wellbeing.

An outgrowth of this growing trend goes by the name "upstreamism." Upstreamist practitioners don't only focus on the patient's downstream symptoms; instead, they also turn their attention upstream to incorporate the patient's social determinants of health in their diagnosis. Dowling illustrates this paradigm with an example of a patient with chronic, life-interrupting headaches. Her upstreamist doctor provided her the usual medication but added the unusual prescription of a visit by a community health worker. The health worker found the patient's apartment walls to be infested with high levels of mold. The doctor and health worker told the patient to have her landlord fix the problem and provided the number for a public-interest attorney should the landlord fail to comply.

Dowling's story shows the holistic approach of upstreamism: to take into account all the determinants of health, not only those found within hospital walls. Sometimes, Dowling notes, that will require medical professionals to take the lead. But other times, when there are extra-symptomatic drivers of health, it will mean partnering with or supporting social service workers, law enforcement, or legal minds to secure a combination of services to heal the whole person.

It's for these reasons that many health-care organizations are spearheading initiatives and outreach programs to directly target social determinants of health before they become medical issues. Examples include Northwell's first-of-its-kind gun-violence screening program and the American Academy of Pediatrics' fight for food security for U.S. children.

As Tambar points out, this holistic outlook means changing our approach to more than just medicine. It will require many aspects of our society to adopt a multi-lens approach, one that adds an interdisciplinary depth to social problems beyond a solitary profession's expertise. He concluded, "What people are realizing is to holistically serve someone, it's not about you doing it all. It's about partnering with the best person who can do something you can't do."