A girl who sparked a national outcry when she was handcuffed and held by police at gunpoint when she was just 11 years old, has died from Covid aged 14.

Honestie Hodges from Grand Rapids, Michigan, was hospitalized for two weeks in intensive care before she finally succumbed to the virus.

The teenager had no underling health issues, according to her grandmother.

She made national news in December 2017 when Grand Rapids police handcuffed her and put her in the back of their patrol car.

Honestie had stepped out of the back door of her home to go to the store with her mother and another family member.

But they were confronted by police officers who had already drawn their guns, saying: 'Put your hands on top of your...'

But the officer responded, 'stop yelling' as he ordered Honestie to walk backwards towards him while keeping her hands up.

A second officer then grabbed her by the arms and placed handcuffs on her and placed her in the car.

She kept on pleading, 'no, no, no' as they kept on the handcuffs for several minutes before releasing her.

They had been searching for a 40-year-old woman in connection with a stabbing.

The subsequent uproar forced changes within the Grand Rapids Police Department on how they treat minors.

The 'Honestie Policy' was introduced, encouraging police to use the least restrictive methods to deal with youngsters.

The officers who reprimanded Honestie were not disciplined because they did not violate any regulations at the time.

She said after the incident to Michigan news site MLive: 'I have a question for the Grand Rapids police: If this happened to a white child, if her mother was screaming, "She’s 11," would you have handcuffed her and put her in the back of a police car?' 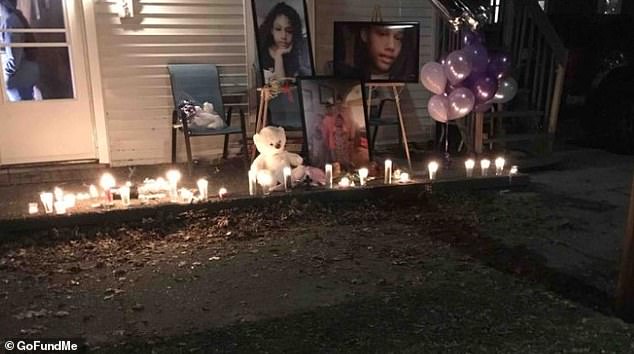 Honestie remained outspoken about police and race issues and this summer, her family were in negotiations with the city to settle a claim for her treatment.

But the teenager fell ill on her 14th birthday on November 9 and was taken to hospital with stomach pains.

There, she tested positive for the coronavirus and was sent home to quarantine.

But her condition immediately worsened that evening and an ambulance came to take her back to hospital, where she was placed in intensive care.

Honestie, whose grandmother Alisa Niemeyer was updating friends and well-wishers on a GoFundMe page, received iron and blood transfusions but her condition continued to deteriorate.

She was placed on a ventilator as Ms Niemeyer asked for prayers, but Honestie died on Sunday after a two-week battle with the virus.

The grandmother wrote on the page, which has raised more than $30,000 for the family: 'It is with an extremely heavy heart that I have to tell you that my beautiful, sassy, smart, loving granddaughter has gone home to be with Jesus.'

The fundraising page had been set up to collect donations for Whitney who had stopped working to care for Honestie and her other four children.

Ms Niemeyer told WOOD-TV: 'She could have been the vice president one day or maybe the president. The world was open to her.'

She added that Honestie was a 'healthy' and 'happy' girl with no underlying health problems.

More from: USAGAG
1
Best Tips for Free Fire Beginners How to play ...
2
Among Us: Best Tips to succeed as a Crewmate ...
3
The birth of the modern American libertarian movement can ...
4
The Shabaka Stone: Ancient Relic tells of God Ptah ...
Filed under Honestie Hodges ,  Grand Rapids police ,  Covid 19