Is Christianity rooted in psychedelic rituals?

In "The Immortality Key," Brian Muraresku speculates that the Eucharist could have once been more colorful.

Brian Muraresku wants to be very clear: the immortality key is not psychedelics. He's referring to the concept of "dying before dying," a mystical, near-death state spiritual figures from around the world—and in his book's case, possibly early Christians—entered into during ritual. As the author stated during our recent interview,

"Certainly, psychedelics seem to be an awfully fast-acting, reliable way to enter into that state—that state between life and death. But it's not the only one, and I want to be very, very clear about that."

Still, "The Immortality Key: The Secret History of the Religion With No Name" is kind of about psychedelics. The main thesis of Muraresku's exceptional investigative work: the modern Eucharist is a placebo variation of a psychedelic brew that originally represented the body and blood of Christ, as was likely practiced during the secret Eleusinian Mysteries. Unlike other religions and mythologies (which acknowledge prior influences), Christian leaders have remained steadfast in the assertion that Christianity emerged whole-cloth as a unique (and, in the eyes of believers, true) faith.

That's just not how religion works. Nothing is created in a vacuum.

This power play—one that, Muraresku writes, potentially demonized psychedelics and ousted them from spiritual rituals, as well as the keepers of ancient ritualistic secrets, women—has forced us to attribute the foundations of Western civilization to Christianity. The real lineage belongs to Greece. Muraresku, who holds a degree in Latin, Greek, and Sanskrit, spent 12 years investigating this book due to his longstanding love of the Classics, which he believes to be the West's actual inspiration.

When beginning his studies, Muraresku had Homer in one hand and the Bible in the other. He realized these works addressed the same communities. Paul's letters, which comprise 21 of 27 books in the New Testament, were addressed to "Greek speakers in Greek places." While the roots of Christianity are in Galilee and Jerusalem, the seeds were planted in Corin, Ephesus, and Rome. And if the Greek language underlies early Christian thought, then so do the philosophy and rituals.

The Connection Psychedelics Have to Early Christianity, Christmas

Muraresku was drawn into this research due to the mystical concept of dying before dying, as expressed during the Mysteries of Eleusis. He uncovered parallel narratives while conducting research with God's librarian in the Vatican Secret Archives—a research trip few people ever have an opportunity to experience.

"This is something preserved in St. Paul's monastery, for example: if you die before you die, you won't die when you die. That's the key. It's not psychedelics; it's not drugs. It's this concept of navigating the liminal space between what you and I are doing right now, and dreaming, and death. In that state, the mystics tell us, is the potential to grasp a very different view of reality."

Something funny happened on the way to the Archives, however. Muraresku, who has never taken a psychedelic drug, read about terminally-ill patients having a similar revelation after ingesting psilocybin. "Dying before dying" succinctly describes what they felt; the overwhelming sensations prepared them to actually die with confidence and grace. Could this be the same experience discovered by initiates at Eleusis and, later, early Christians?

The key to immortality might be dying before dying, and psychedelics appear to be one method for unlocking this mystery.

Muraresku spends the bulk of 400 pages chasing down archaeological and scriptural evidence for spiked wine. The wine and wafer of today is a far cry from the kukeon of the ancient Greeks, drunk by pilgrims, who were given the title epoptes, "the one who has seen it all." That's a heavy ask for a grape.

But if you were to mix that grape with blue water lily (with its psychoactive compounds, apomorphine and nuciferin), henbane, lizards—ancestral food choices that put Brooklyn hipsters to shame—or ergot, the fungal disease that gives LSD its kick, you might just "see it all." As Muraresku points out, the Greek language is descriptively rich and extensive, yet these philosophers somehow never invented a word for "alcohol." Their chalices weren't for wine alone. 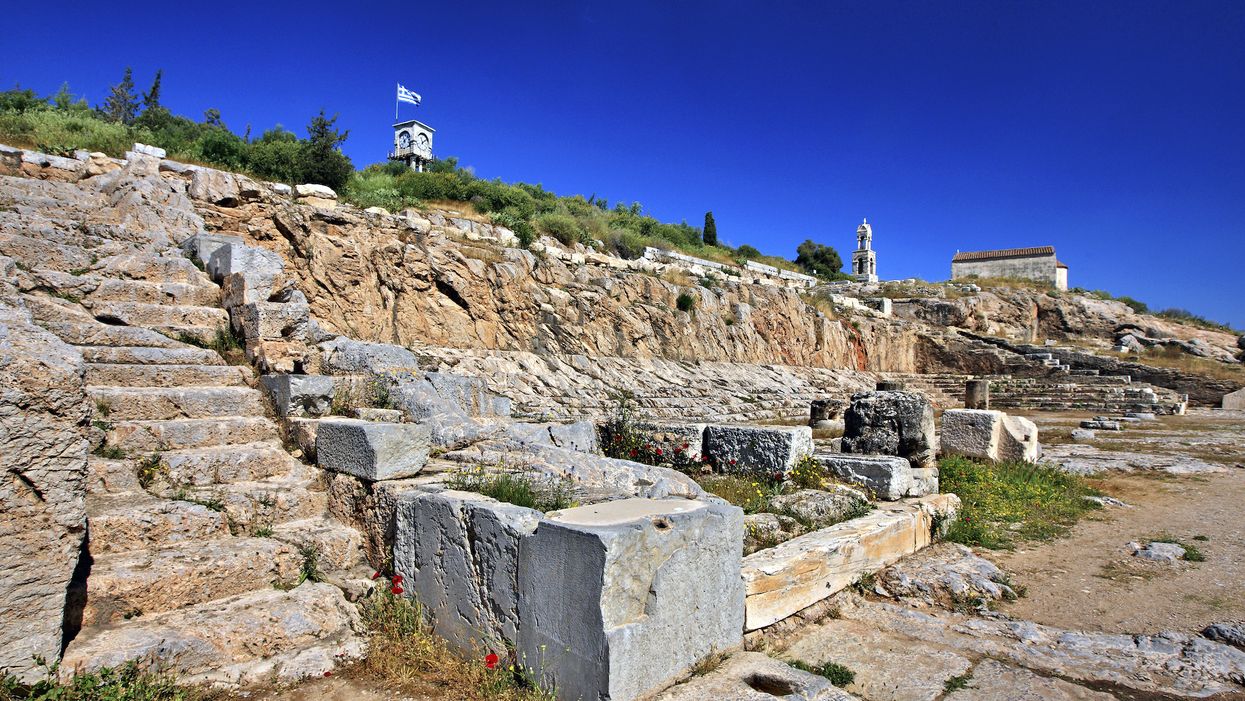 The Telesterion at the Archaeological site of Eleusis ( or "Elefsis) or "Elefsina", Attica, Greece

While he calls psychedelics "just one, perhaps very tiny piece" of early Christian rituals, it could be an essential one. Sadly, archaeochemistry isn't the most funded discipline, especially after asking the Vatican to hand over guarded relics in hopes of discovering trace amounts of psychedelics. And yet, even with those restrictions, Muraresku gains access to the Vatican Secret Archives and jet sets with a sympathetic Father Francis through the Louvre and Rome in search of potential connections in the literature and art.

There are plenty. While the gospel writers were busy writing what would become the world's most lasting bestseller, Dioscorides was penning his unforgettable recipe book, "Da meteria medica." The five-volume drug manual's influence lasted for 1,500 years before Renaissance botanists usurped his reign. Regardless, Dioscorides included cocktails spiked with plants, herbs, and toxins, some of which inspire a hallucinogenic—some would say religious—sentiment.

"It's no mistake that the Eucharist is described as the 'drug of immortality' by the early Church fathers because there was this sense of really sophisticated botanical understanding that goes all the way back to Homer. Obviously, it goes back a lot further, and so part of the reason I wrote the book is to show people that within Western civilization—at its roots, in fact—is this very pharmacopoeia. This tradition was certainly there, and it begs the question of how prevalent and widespread it really was."

Add to this already riveting tale the fact that the gatekeepers of Eleusis were women—a practice Christianity abandoned. Women were likely the distributors of the spiked beverages that helped initiates "see it all." Modern precedent exists, though not in American Christianity. The Western world was introduced to psilocybin after R Gordon Wasson sat in on a ceremony led by the curandera María Sabina. Likewise, ayahuasca is called "godmother" for a reason.

We live in a world that went from honoring goddesses to hunting witches, though we shouldn't glorify ancient Greece. The first democracy didn't allow women to vote and likely didn't let them partake in epic plays. Men performed as women in the Tragedies. Highborn women often become slaves in these plays, such as with Cassandra, Hecuba, and Tecmessa. Misogyny is ancient. While Greek city folk were jacked up on testosterone, Eleusis offered a different landscape.

Regardless, Christian leaders exiled women from both leadership and ritual. While in the Archives, Muraresku found evidence of at least 45,000 so-called witches being executed, with "countless more" tortured or imprisoned. The patriarchy initiated a pattern:

"[The leadership] wasn't just trying to rid Christianity of folk healers. It was trying to erase a system of knowledge that had survived for centuries in the shadows."

The knowledge was the pharmacological expertise these women had amassed over untold generations. The two banes of the Church—mind-altering substances that afford the initiate a mindset comparable (or, perhaps exactly akin) to prophets and sages and women, the holders of the Secrets—were swept up in one millennia-long cover-up. As Muraresku succinctly phrases it, "the Catholic Church started the War on Drugs." Perhaps the War on Women, too.

Perhaps they're two aspects of the same war.

Interestingly, this 12-year-long odyssey only deepened Muraresku's Catholicism, which is rooted in the Jesuit tradition. As he says, Christianity—a religion that was a cult for over 300 years before being catapulted onto the global stage—has always evolved. Could the Church possibly change again and offer the psychedelic sacrament that might lie at the heart of the religion? Is another Reformation possible?

As Muraresku concludes during our talk, each attempt to get back to the roots, beginning with Martin Luther and continuing right through to Pope Francis, is an analysis of the origins of the faith. To know your history is to understand where you're heading. Muraresku would like to see another step forward.

"There was no monolithic Christianity. Just like today, you look around and see 33,000 denominations of Christianity—a few of which include psychedelics as their sacrament, such as the Santo Daime or the Native American Church, which has some Christian syncretism to it. The possibility of a psychedelic sacrament in antiquity is not laughable. In fact, it's quite plausible according to some of the literature and data that's just beginning to emerge on the scientific front.

"When I look and see Hellenic Christianity that was very much at the roots of the Catholic Church, and the more I found that Greek influence underneath the Vatican—in some cases, literally, in the catacombs—the more I began to really love and appreciate what this was all about. The more I read the Greek and the more evidence that I see, the more in love with Christianity I become. Now, it might not be some people's definition of Christianity today, but again, if you just step back and take a very honest look at the Greek of the New Testament and the Greek landscape in which it emerged, it's a really powerful statement."