The Zeus statue in Olympia, Greece, was one of the ancient world's seven wonders and possibly the most famous statue of its day.

The Zeus statue in Olympia, Greece, was one of the ancient world's seven wonders and possibly the most famous statue of its day. This statue, which was previously created as a temple to commemorate the Greek deity Zeus, was seen as the incarnation of the Greeks' most important god, and not seeing it at least once in one's lifetime was considered a curse. It was the highest statue in the Mediterranean world, measuring four stories tall and seven times the height of an ordinary man. It was also the statue in honor of whom the first Olympic Games were held.

According to tradition, Zeus' shrine was built on the site of a thunderbolt launched by the deity from his seat high above Mount Olympus, where the gods gathered. Pilgrims visited Zeus' various hilltop shrines, but the god's most famous temple was the massive Temple of Zeus, erected in a holy forest between two rivers at Olympia on the west coast of Greece. Olympia was not just home to the Temple of Zeus, but also to the Olympic Games. They began in 776 BC and are conducted every four years since then. The ancient games were held in the framework of a religious celebration, which is one distinction between them and the current Olympic Games. They were held in Zeus' honor, as he is regarded as the founder of the Olympic Games.  To honor Zeus, a temple was commissioned by the citizens of Olympia in 470 BC. 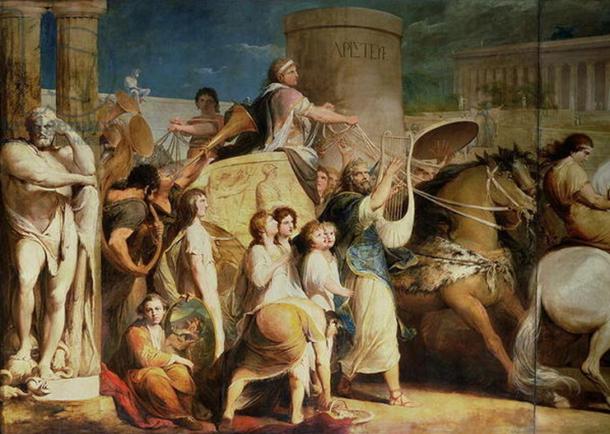 Crowning of Victors of the Olympic Games. Depicted at Olympia - Hiero of Syracuse and victors. ( Wikimedia Commons )

The Temple of Zeus, built in the city of Olympia between 466 and 456 BC by the Greek architect Libon in the classical Doric style, was completed between 466 and 456 BC. Olympia was a center of Zeus' devotion in ancient times, with various riches, baths, temples, monuments, altars, theaters, and gorgeous sculptures. The temple was described in detail by Pausanias, a Greek explorer who authored the first guidebook to ancient Greece around 150 AD. The Doric style temple has 13 columns on each end and six columns on each side. The roof had a gentle incline to it, with 40 lion-shaped marble gargoyles serving as water spouts. Sculptures portraying Heracles' twelve labors were found under the triangles or "pediments" (the block above the columns).

The design was comparable to the Parthenon in Athens and the Temple of Artemis in Ephesus, and it was employed on many big Grecian temples. Despite the fact that the temple was regarded one of the outstanding examples of Doric design due to its elegance and craftsmanship, it was judged that the temple alone was not worthy of the King of the gods. A monument was commissioned for the inside to address this issue.

The statue of Zeus, which is located in the Temple of Zeus, was created around 430 BC by the Greek sculptor Phidias, who is regarded as ancient Greece's most famous artist. It was one of his two masterpieces, the other being the statue of Athena at the Parthenon, which took him several years to construct.

The statue was over 13m (42 feet) tall, 6m (21 feet) broad, and had a 13m (42 foot) diameter (43 feet). In the first century BC, the Greek geographer Strabo observed that if Zeus had risen up, he would have smashed his head through the temple's ceiling. The cella, or Naos, was the temple's inner sanctum and the principal room at the heart of the structure, which housed the gigantic figure. A observation gallery, accessible through two spiral stairs, enabling guests to observe it from a high vantage point. The eternal Zeus sat on a throne adorned with representations of heroes and gods from Greek mythology. The statue was built using a cedar wood frame and pricey materials including ivory, ebony, bronze, gold leaf, and valuable stones.

Zeus' eyes were set with jewels, and a silver olive wreath encircled his head. His unclothed flesh—head, hands, and feet—were depicted in polished ivory, while his hair and beard were fashioned of gold. He was dressed in a gold robe and gold sandals. Two imposing gold lions supported the stool beneath his feet. A scepter adorned with an eagle's head was held in his left hand, indicating his dominance over Earth. A life-size statue of Nike, the winged goddess of triumph, sat in his right hand. The deity had to be anointed with olive oil on a daily basis to preserve his ivory skin from cracking, which was collected in a shallow pool beneath his feet and used to clean the statue. 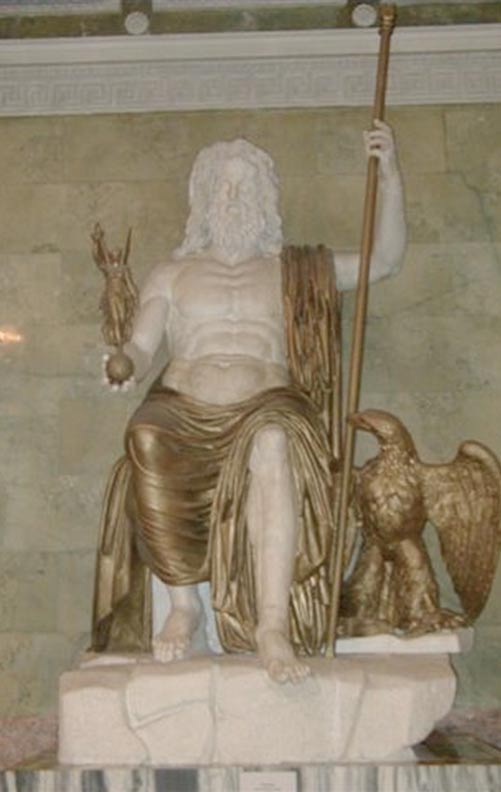 A Roman Seated Zeus, marble and bronze (restored), following the type established by Phidias and what he should have looked like at the Temple at Olympia. (Hermitage Museum, Saint Petersburg). Photo by Sanne Smit. ( en.wikipedia.org)

The Zeus statue stood for approximately 800 years, and it was the largest statue the ancient Greeks had ever seen. What happened to it in its final years is unknown. Theodosius I, Rome's first Christian emperor, ordered the monument destroyed and stripped of its gold in 391 AD. Because of its pagan connotations, the Olympics were likewise banned by Theodosius I in 393 or 394 AD.

Theodosius II ordered the temples to be destroyed in 426 AD, and it may have perished at that time or been moved to Constantinople (the new capital of the Roman empire), where it was destroyed along with the temple during a great fire in either 462 or 475 AD, according to historian Georgios Kedrenos.

Theodosius II ordered the temple of Zeus to be destroyed in 426 AD. 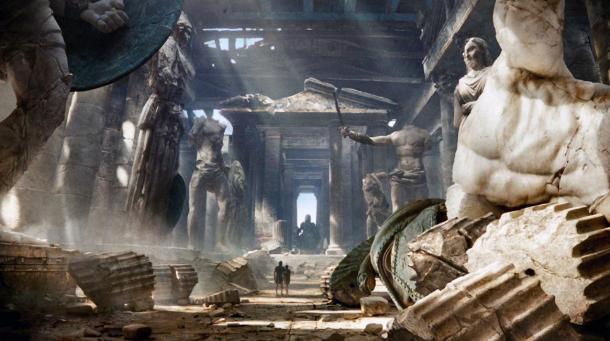 The destruction of the temple of Zeus was ordered by Theodosius II in 426 AD. ( picturefordesktop.com)

In 1829, a group of French scientists conducted the first excavations on the Olympia site. They were able to locate the temple's outline and discovered remnants of the sculpture depicting Heracles' labors. These works were transported to Paris and are now on exhibit at the Louvre. The following expedition, from Germany, arrived in 1875 and was able to survey the whole temple as well as find the remnants of the pool in the floor that held the statue's oil. An excavation in the 1950s found Phidias' workshop, which was discovered beneath an early Christian church.

Sculptor's tools, a bronze casting pit, clay molds, modeling plaster, and even a fragment of one of the elephant's tusks that supplied the ivory for the statue were discovered by archaeologists. Many of the clay molds used to form the gold plates had serial numbers on them, which must have been used to indicate where the plates were in the design. Archaeologists discovered a black glaze drinking cup with the inscription "I belong to Phidias" in 1958. 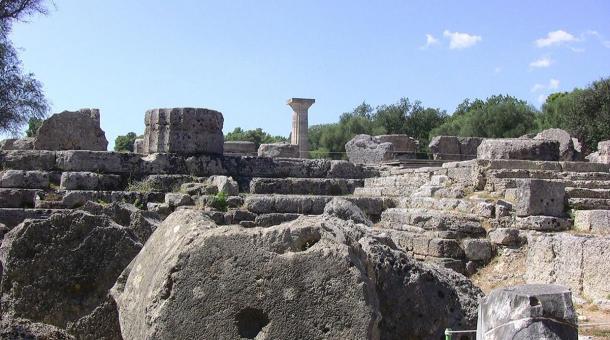 The remains of the Temple of Zeus today at Olympia, Greece. Photo by: troy mckaskle in 2011. ( Wikimedia Commons )

All that is left of Olympia today are the temple's fallen columns and the building's foundation, which were discovered during archaeological excavation in the 19th and 20th centuries. Because there are no known duplicates of the statue, its precise visual portrayal has never been proven, and many of the elements are based on images on coins and ancient Greek accounts.

Featured Image: The statue of a seated Zeus at Olympia, was created by the Greek sculptor Phidias. It was thirty-nine feet, or twelve meters, tall. The sculpture was wreathed with golden olive shoots and sat on a grand throne cedar wood, inlaid with ivory, gold, ebony, and precious stones. ( barringtheaegis.blogspot.com)

More from: USAGAG
1
Facebook's doomed cryptocurrency effort is almost certainly coming to ...
2
Defending Taiwan is an admirable objective. But are we ...
3
Is China intending to poison international competitors during the ...
4
China secretly purchased a stake in an Italian drone ...
Filed under Olympia ,  Zeus ,  Greece