The bubonic plague ravaged the world for centuries, killing up to 200 million people.

While the world continues to suffer from the onslaught of Covid-19, its toll has yet to approach the grim statistics of history's deadliest pandemic – the Black Death. Also called the Black Plague, this terrible illness afflicted Europe and Asia in the mid-1300s, with new outbreaks over several centuries. It killed about a third of the European population when it began – nearly 20 million people. Over a few years, the total for the extremely contagious plague is estimated to have reached as high as 200 million victims globally.

The bubonic plague first came to Europe in 1347, aboard 12 trading ships from the Black Sea that docked at the Sicilian port of Messina. Most of the sailors on these ships were either terribly ill, covered in black boils full of blood and pus, or dead. By the time the authorities tried to send these ships away, it was too late and the plague started spreading. This was due, in particular, to the fact that the disease did not only transmit through air but also through the bites of infected fleas and rats. These were plentiful in Europe of the time, and a real mainstay aboard ships, which carried the plague from port to port. The illness also spread to livestock like cows and sheep and even chicken. 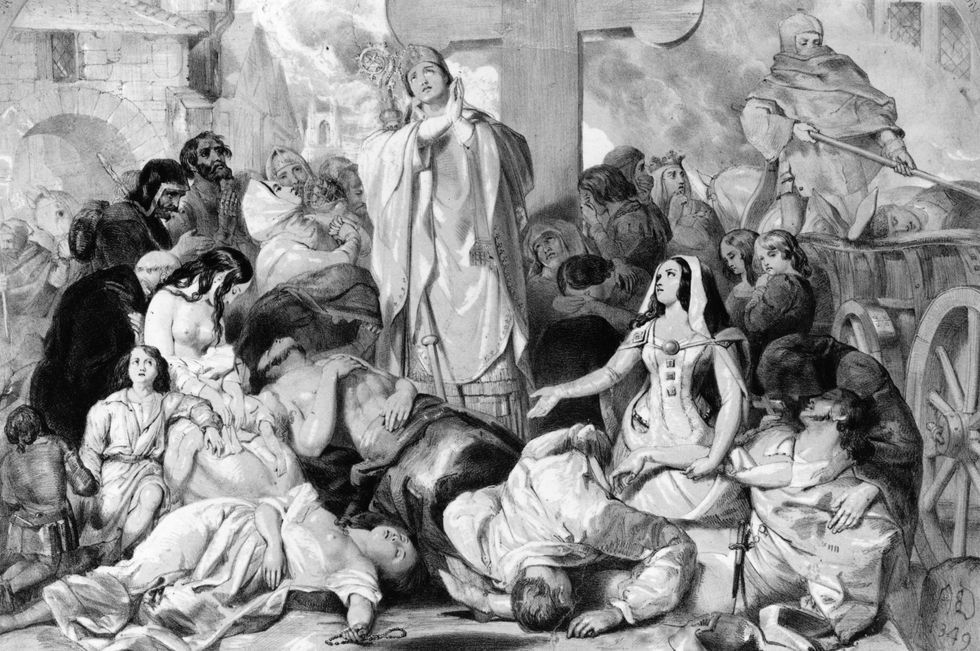 People praying for relief from the bubonic plague, circa 1350. Original Artwork: Designed by E Corbould, lithograph by F Howard.

The origin of the disease was likely in Asia and goes as far back as 2,000 years ago. The plague is an ancient pestilence that has profoundly decimated the world on different occasions but none as bad as when it hit in the Middle Ages.

Caused by the bacterium Yersinia pestis, the plague resulted in terrifying symptoms. As reported by the History Channel, the Italian poet Giovanni Boccaccio described the afflictions that come with the plague in no uncertain terms: "In men and women alike, at the beginning of the malady, certain swellings, either on the groin or under the armpits…waxed to the bigness of a common apple, others to the size of an egg, some more and some less, and these the vulgar named plague-boils." 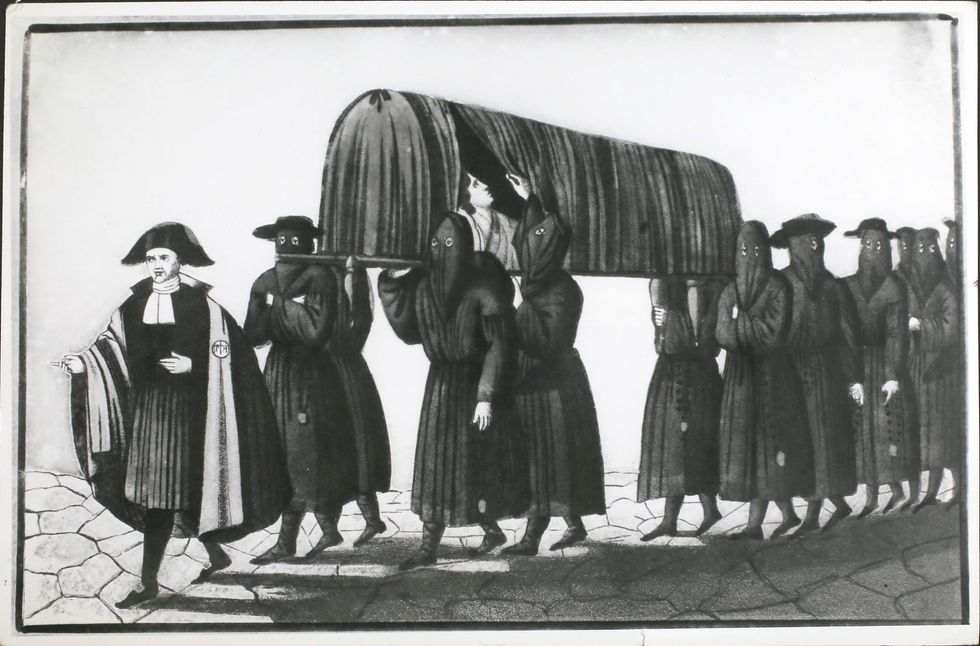 Ambulance men of Florence, Italy, carrying a patient on a stretcher whilst wearing masks to ward off the plague.

Attacking the lymphatic system, the plague also brought with it fever, vomiting, diarrhea, body aches and pains. Unfortunately, available medieval treatments like bloodletting certainly weren't too pleasant and did little to stem the tide of the Black Death. Neither did the belief of many that the plague was a punishment from God. This resulted in the purging of "heretics" like the massacres of thousands of Jews in 1348 and 1349 and a whole class of self-flagellating people who went from town to town beating themselves in penance.

What finally ended the Black Death? It went away for periods of time but would come back for a new round during several centuries like its resurgence in London in 1665-1666, when it killed about 100,000 – a quarter of the city's population. The eventual weakening of the pandemic was likely due to the practice of quarantining infected people that originated in Venice in the 15h century and is still with us today. Improved sanitation, personal hygiene, and medical practices also played a role in ultimately slowing the plague's terror march. Still, annually there are about 1,000 to 3,000 cases of the plague even in the modern world.