Citizen scientists are filling research gaps created by the pandemic

A team of astrophysicists uses AI to figure out which clusters of stars merged to become our galaxy.

The Milky Way, the galaxy that contains our Solar System, is estimated to be about 13.6 billion years old. But what was there before? A loaded question that scientists are getting closer to answering. A team of astrophysicists reconstructed the cosmic ancestry of our galaxy. They figured out its family tree by using artificial intelligence to analyze globular clusters that orbit the Milky Way.

Globular clusters are collections of up to a million stars, almost as old as the Universe itself. Over 150 clusters of this kind are present in the Milky Way. Scientists believe that many of them were created in smaller galaxies that merged to form our galaxy. Astronomers treat them as "fossils" for reverse engineering the history of our home in space. The latest study allowed the research team to do exactly that.

The group led by Dr. Diederik Kruijssen from the University of Heidelberg (ZAH) and Dr. Joel Pfeffer from Liverpool John Moores University modeled the merger story of the Milky Way. They designed sophisticated computer simulations called E-MOSAICS to represent a complete model of the creation, evolution and demise of globular clusters. The researchers linked ages, the chemistry, and orbital motions of these clusters to the composition of the preceding galaxies that formed them, over 10 billion years ago. The analysis allowed the scientists to pinpoint how many stars the progenitor galaxies had as well as when their merger forming the Milky Way took place.

"The main challenge of connecting the properties of globular clusters to the merger history of their host galaxy has always been that galaxy assembly is an extremely messy process, during which the orbits of the globular clusters are completely reshuffled," Kruijssen pointed out.

Check out how E-MOSAICS simulations shows the formation of a galaxy like the Milky Way:

Once they trained their artificial neural network to investigate the galactic merger history, the researchers "tested the algorithm tens of thousands of times on the simulations and were amazed at how accurately it was able to reconstruct the merger histories of the simulated galaxies, using only their globular cluster populations," according to Kruijssen.

To dive deep into the prehistory of our galaxy, the researchers directed their AI to study global clusters that they suspected were formed in the progenitor galaxies. The orbital motion of the clusters informed their predictions. The AI was able to pinpoint the masses of the stars and the details of the mergers with great precision. It also discovered a collision 11 billion years ago between the Milky Way and a mysterious galaxy the scientists evocatively dubbed "Kraken". 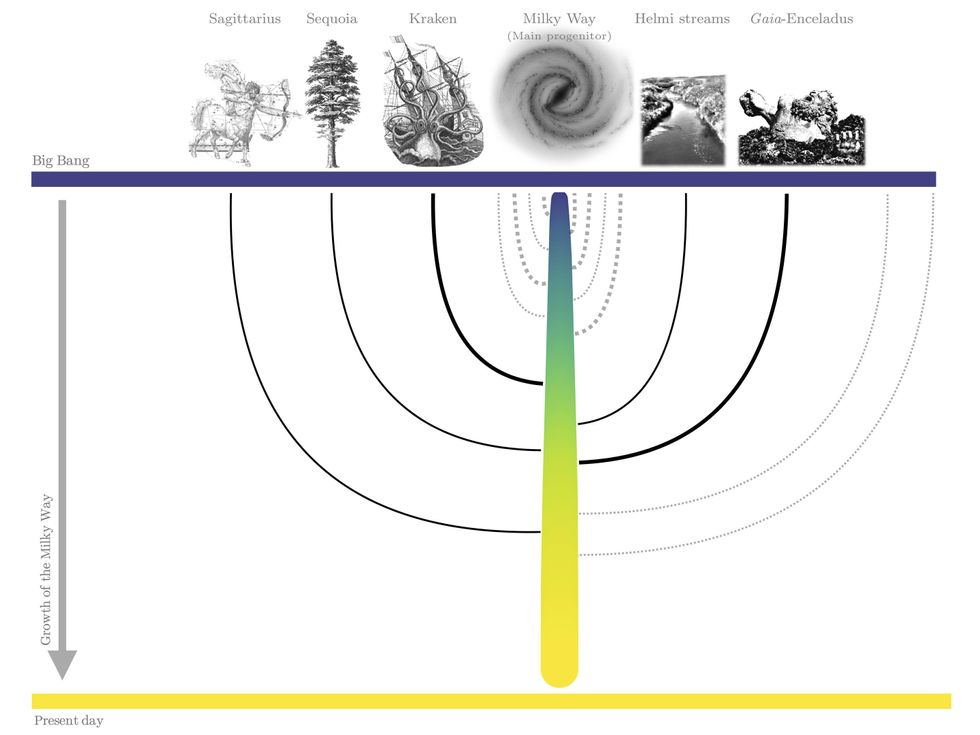 Kruijssen called this collision with Kraken "the most significant merger the Milky Way ever experienced." This event would have superseded the collision with the Gaia-Enceladus-Sausage galaxy of 9 billion years ago and was likely much more transformative, since our galaxy at that time was four times less massive.

Overall, the researchers think the Milky Way consumed about five galaxies of over 100 million stars, as well as fifteen galaxies with 10 million stars or more. The scientists hope their findings will be used to locate debris from all of our galactic ancestors.

Check out their study "Kraken reveals itself – the merger history of the Milky Way reconstructed with the E-MOSAICS simulations" published in Monthly Notices of the Royal Astronomical Society.