Two members of the South Carolina National Guard suffered serious injuries in a lightning strike in Washington D.C. early Friday morning  They were on duty at Lafayette Square as protesters gathered for the seventh night  They were not directly hit by the bolt but felt its effects Both are in a stable condition in hospital  An …

Two members of the South Carolina National Guard were rushed to hospital with serious injuries early Friday morning after a lightning strike in Lafayette Square.

Officials said the two military personnel injured in the strike shortly past midnight as they guarded the perimeter of the square at the center of the George Floyd protests in Washington D.C.

The Washington Monument was also struck by a massive bolt of lightning on Thursday night.

The moment it struck was captured in an amazing five-second clip from a local news station’s weather cam as lightning rained down over the nation’s capital. 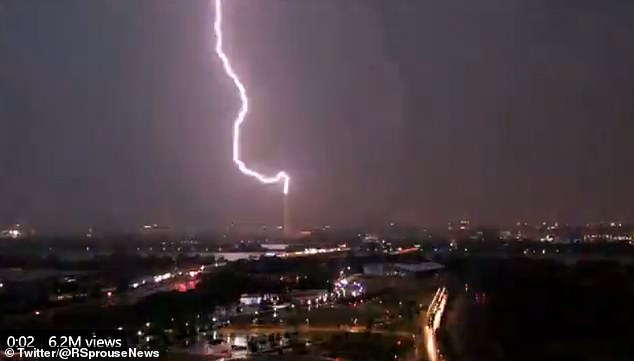 The Washington Monument was seen being hit by lightning in a shocking video of the storms over Washington D.C. on Thursday night. Two members of the National Guard were also injured

The National Guard confirmed Friday morning that two of its members had been injured in the lightning strike in Lafayette Square and are now in hospital in a stable condition.

According to NBC, the pair were not struck directly but ‘felt the effects of a nearby lightning strike’.

Their injuries were not life threatening, Vito Maggiolo, spokesman for the district’s fire and emergency medical services department, told NBC.

The members were on duty at the time as protests continued in the city for a seventh night despite the stormy weather. 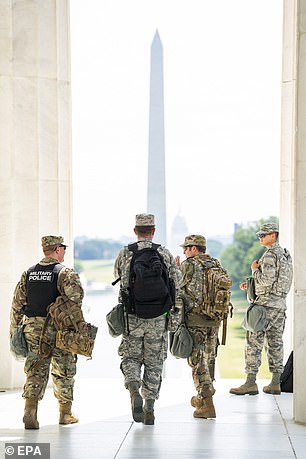 Two National Guard members on duty in Washington D.C. were injured by lightning early Friday morning. Pictured, members of the DC National Guard gear-up after a short rest from standing guard at the Lincoln Memorial

They will be under observation for 24 hours.

There were no reports of any injuries to protesters.

The Washington Monument is also unharmed after being hit during the thunderstorm.

The iconic structure regularly struck by lightning, according to Atlas Obscura.

Standing at 550-ft, it is something of a lightning rod but is installed with two rods to try and divert the strikes.

When first built, it was fitted with an aluminum tip at its top which has been melted down several times by repeated lightning strikes.

It was first installed in December 1884 but had already melted down by about 3/8ths of an inch within half a year.

While other measures were later installed to try and prevent the strikes, the tip remains.

Some social media users compared the video of the Washington Monument lightning strike to the current turmoil and the ongoing uprising against police brutality taking place in large demonstrations across the country.

‘Washington Monumnet just a bit ago. Maybe there is a God,’ wrote Randi Mayem Singer.

A parody God account joked, ‘My aim’s not what it used to be’.

Washington D.C. was under a flash flood warning on Thursday night as large thunderstorms broke out.

The stormy weather did nothing to deter protesters, however, who continued to turn out in the city for another night of protest, although in smaller numbers.

According to the Washington Post, they held a ‘die-in’ at the White House and then marched to Washington National Cathedral.

There had been no curfew put in place Thursday night after protests remained peaceful and no arrests were made through the night before.

Despite the smaller crowds and peaceful conditions, there continued to be a strong military, police, and riot control presence.

The demonstrators have been barred from entering Lafayette Square, near where the National Guard members were injured, from Wednesday night and barricades were put in place a block away.

The park was the place where agents used pepper spray and other chemical agents, along with rubber bullets and police on horseback to clear the streets around the White House on Monday so Trump could walk to St. John’s Church for a photo-op.

There has been controversy over the use of National Guard members from other states on the streets of D.C. this week after tense clashes between protesters and law enforcement on Sunday and Monday night.

D.C. Mayor Muriel Bowser has said that they were not invited by her. 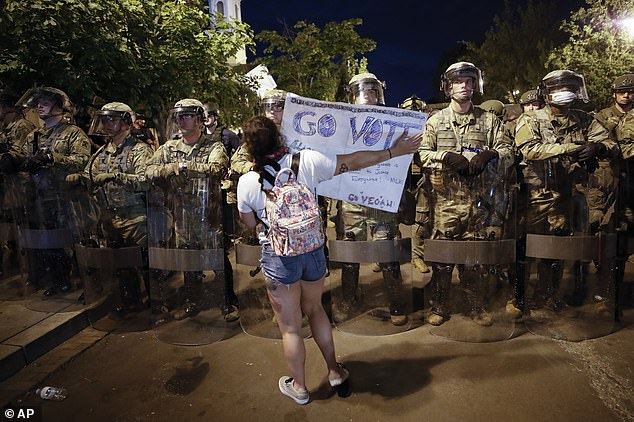 National Guard soldiers as demonstrators gathered to protest the death of George Floyd on Thursday near the White House. The protesters still took to the streets despite stormy weather

On Thursday, she called for the withdrawal from the U.S. capital of military units sent from outside the city.

‘We want troops from out of state out of Washington D.C.,’ she told a news conference.

Bowser said she had authorized the deployment of D.C. National Guard units as part of her response to the coronavirus pandemic, but did not request other military units.

‘There are other federal assets we did not request that we understand are under the direction’ of U.S. Attorney General William Barr,’ Bowser added.

Scores of heavily-armed federal officers in tactical gear have been on the district’s streets for days, after demonstrators set fires, broke store windows and stole items from the shelves and left police officers injured.

The Trump administration has made an effort to show a use of force in Washington.

Mayor Bowser said the administration had floated the idea of taking over the Metropolitan Police Department, a proposal she strongly rejected. She threatened to take legal action if the federal government attempted to do so.