The 'UFO Battle' of 1561 at Nuremberg is a mysterious event

All people of Nuremberg, Germany, came out of their homes in April 1561 to examine unexplained lights and loud noises. They stared into the skies, awestruck and terrified, as they observed what looked to be an air war in plain daylight early in the morning.

According to sources, the incident lasted around an hour, and artist Hans Glaser photographed it for the German Nuremberg Gazette. He mentions crosses, tubes, wheels, multi-colored items, and globes as he describes the incident. There were hundreds of them. Objects would vanish in a cloud of smoke, with some even colliding with the earth. The smoke could be seen for miles.

For ages, this image and description have eluded understanding. What on Earth could explain these occurrences, which appeared to be observed by a large number of people?

A Natural Event At Nuremberg?

Some would attribute all of this to the advent of meteors or comets, or even other natural phenomena, but the Nuremberg incident's singularity rules out such explanations. Glaser's extensive explanation does not appear to be consistent with any naturally occurring causes:

…the dreadful apparition filled the morning sky with cylindrical shapes from which emerged black, red, orange and blue-white spheres that darted about. Between the spheres, there were crosses with the color of blood. This frightful spectacle was witnessed by ‘numerous men and women.’ Afterwards, a black, spear-like object appeared. The author of the Gazette warned that ‘the God-fearing will by no means discard these signs, but will take it to heart as a warning of their merciful Father in heaven, will mend their lives and faithfully beg God, that he avert His wrath, including the well-deserved punishment, on us, so that we may, temporarily here and perpetually there, live as His children.’-  Abstract from the Nuremberg Gazette. 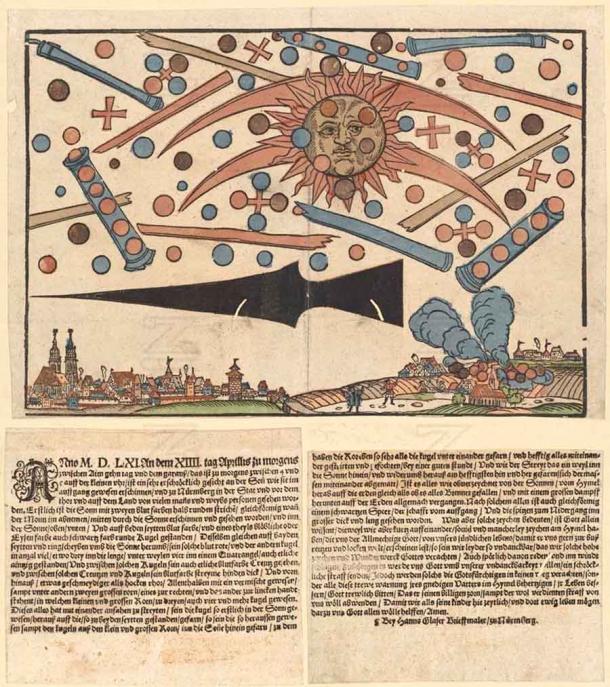 The celestial phenomenon over the German city of Nuremberg on April 14, 1561, as printed in an illustrated news notice in the same month. ( Public Domain )

Cylinders, crosses and a black spear-like object appearing in the sky are something that you would imagine seeing in a modern air-battle – but not something that would take place half a millennium ago!

A few years later, in 1566, in Basel, Switzerland, a similar incident occurred, except this time it included black orbs engaged in a sky combat over the city. That occurrence was also noted in the city's gazette at the time.

In Hamburg, Germany, a similar incident occurred in 1697, when the throng viewed two giant luminous wheels in the sky above the city.

Several reports are available. My many folks have to be describing some strange phenomenon in the air above large cities. Unfortunately, there were no cameras accessible to take images or recordings of the events at the time, so we only have newspaper references and sketches to go on. Many people have different interpretations of these events, as well as different eyewitness accounts. Regardless, something unusual happened in the skies that day. 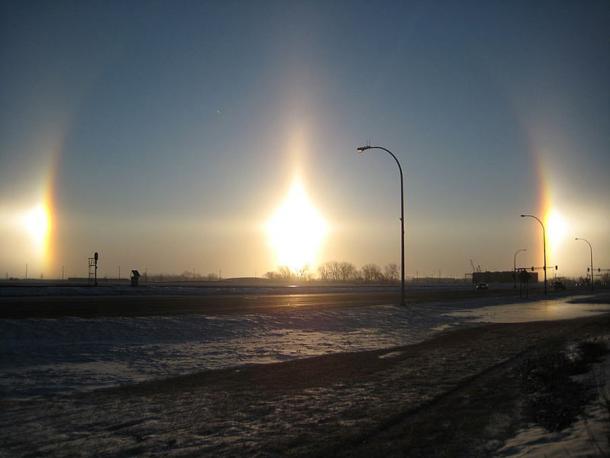 Very bright sun dogs in Fargo, North Dakota. Also visible are parts of the 22° halo (the arcs passing through each sundog), a sun pillar (the vertical line) and the parhelic circle (the horizontal line). ( Public Domain )

Frank Johnson recently attempted to debunk the Nuremberg event by blaming it on sky reflections and the Sun's'sun dog' lighting effect, without offering any explanations for the sounds, crashed objects, or smoke, and instead speculating that these details could simply be the people's imaginations or nothing at all.

According to another interpretation, the entire scene may be a ground combat, with the cylinders representing gun and the spheres representing cannon rounds.

Is it conceivable that the entire incident actually occurred, and the newspaper mention was really a joke, or at the very least an exaggeration of what was reported? The broadsheets of the day, according to Johnson, "included news of the strange or violent, and they had no issue twisting the facts to sell a few copies."

After you've ruled out everything that's impossible, whatever remains, no matter how unlikely, must be the truth. Of fact, none of them have been ruled out, but neither has a terrestrial explanation been discovered. The event's reporting is so similar to what you'd anticipate from a modern-day sky war that interpretations like a clash between visiting aliens or even a time-shifting event are still on the table.

It is up to you to decide what to believe, but do so based on the evidence, and above all investigate to find the truth.

Top image: The celestial phenomenon over the German city of Nuremberg on April 14, 1561, as printed in an illustrated news notice in the same month. Source:  Public Domain

More from: USAGAG
1
Facebook's doomed cryptocurrency effort is almost certainly coming to ...
2
Defending Taiwan is an admirable objective. But are we ...
3
Is China intending to poison international competitors during the ...
4
China secretly purchased a stake in an Italian drone ...
Filed under Nuremberg ,  UFO Battle