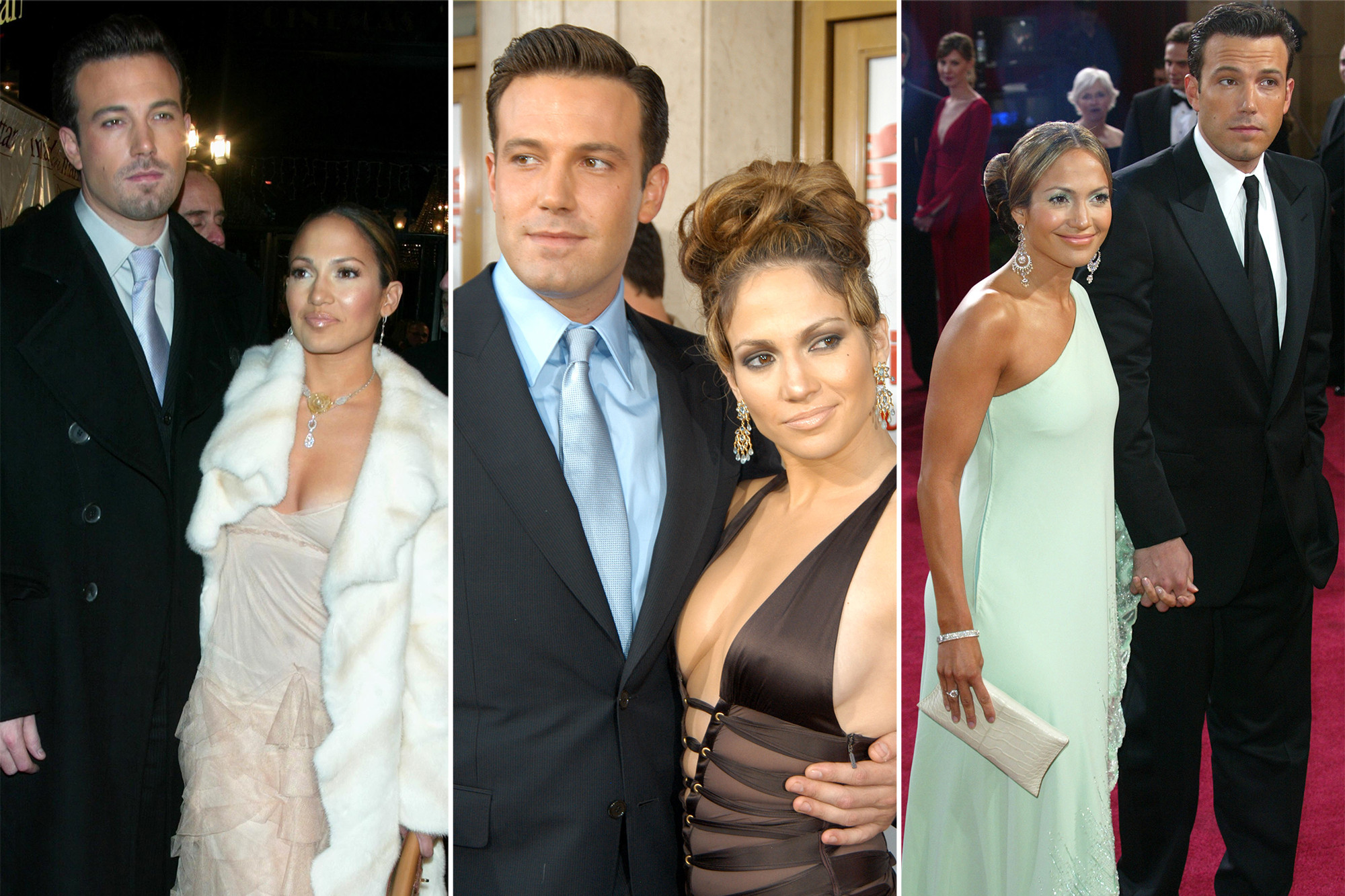 After exes Ben Affleck and Jennifer Lopez were snapped vacationing together in Montana, many fans are hoping the pair will come back stronger than a 2000s trend.

The former couple have been spending time together following the end of Lopez's engagement to Alex Rodriguez, with Affleck also spotted leaving J.Lo's Los Angeles home in April.

Almost two decades after their breakup, the "Argo" star even reportedly sent his former flame love letters prior to her split from A-Rod.

Lopez and Affleck's whirlwind two-year romance began in the summer of 2002. The "Gigli co-stars were quick to get engaged, but postponed their wedding in 2003, only to part ways the following year.

While we hold our breath for a red carpet reunion, let's take a look back at some of Bennifer's most memorable style moments as a couple.
Getty Images 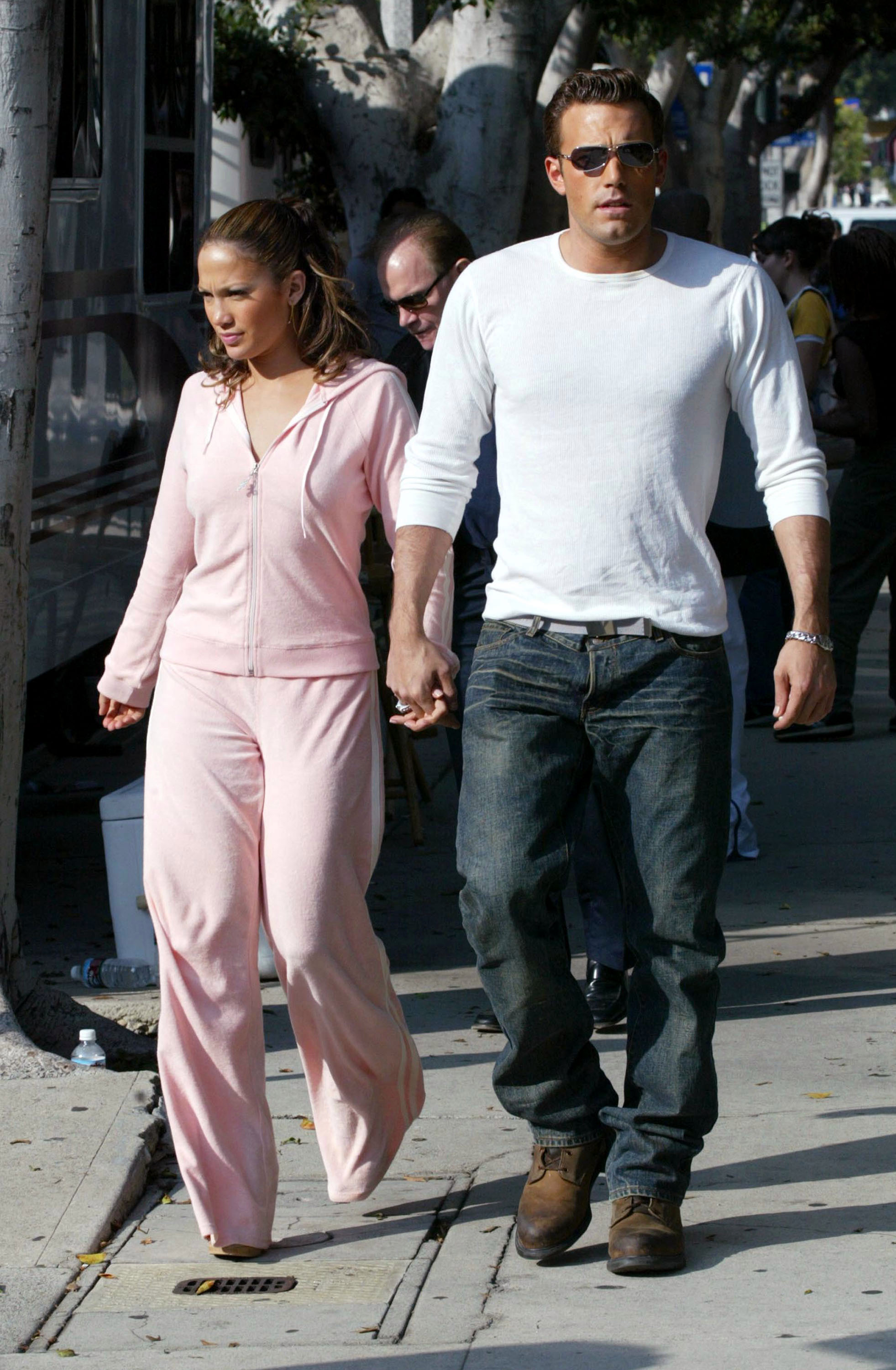 From Lopez's baby pink velour Juicy tracksuit to Affleck's baggy jeans, these looks are as early-aughts as it gets.
Getty Images 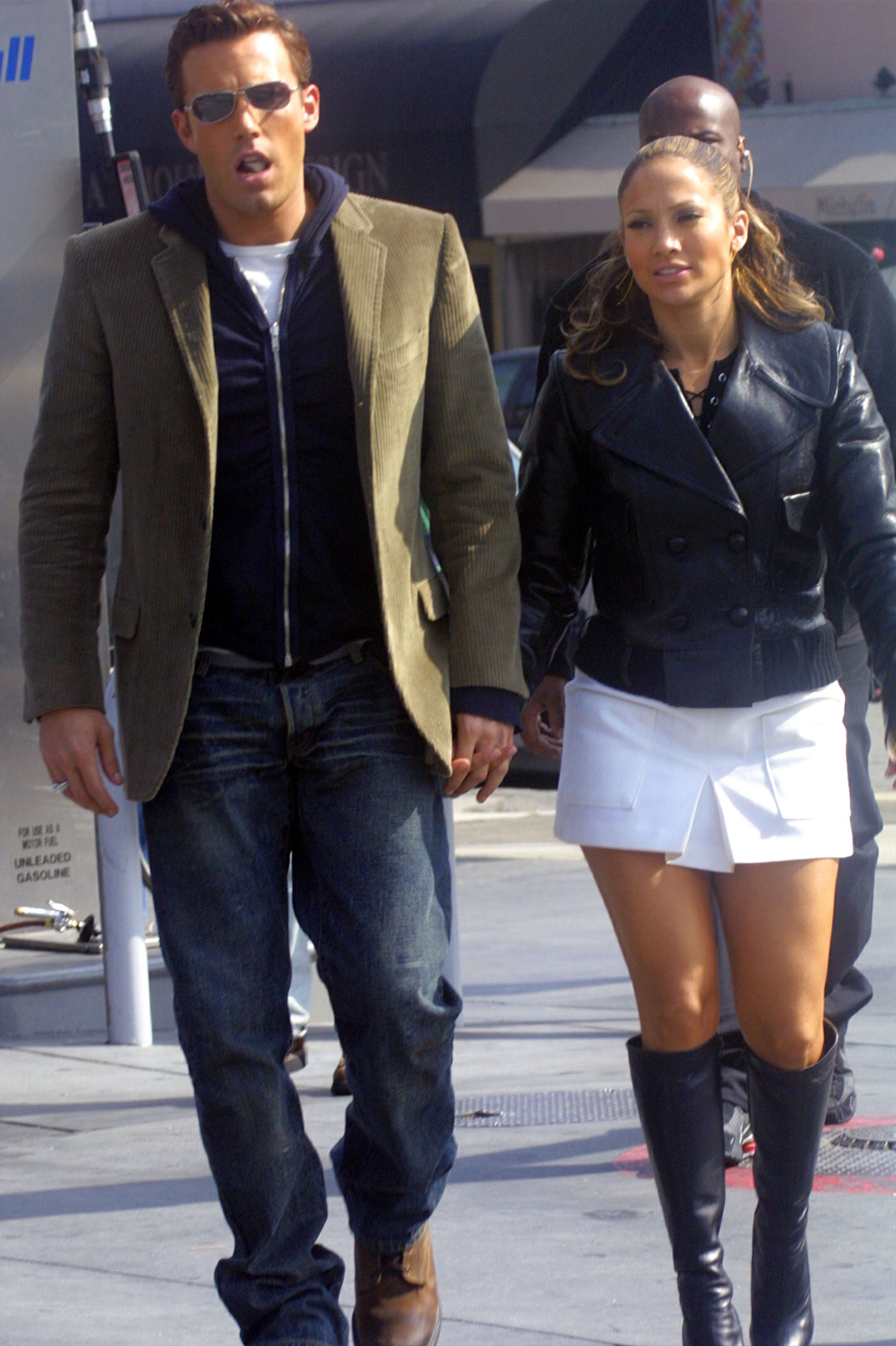 "Jenny From the Block" hit the block holding hands with Affleck in October 2002 -- just one month before he proposed -- wearing knee-high leather boots and a matching jacket. Meanwhile, Affleck kept it simple in jeans and corduroy.
Getty Images 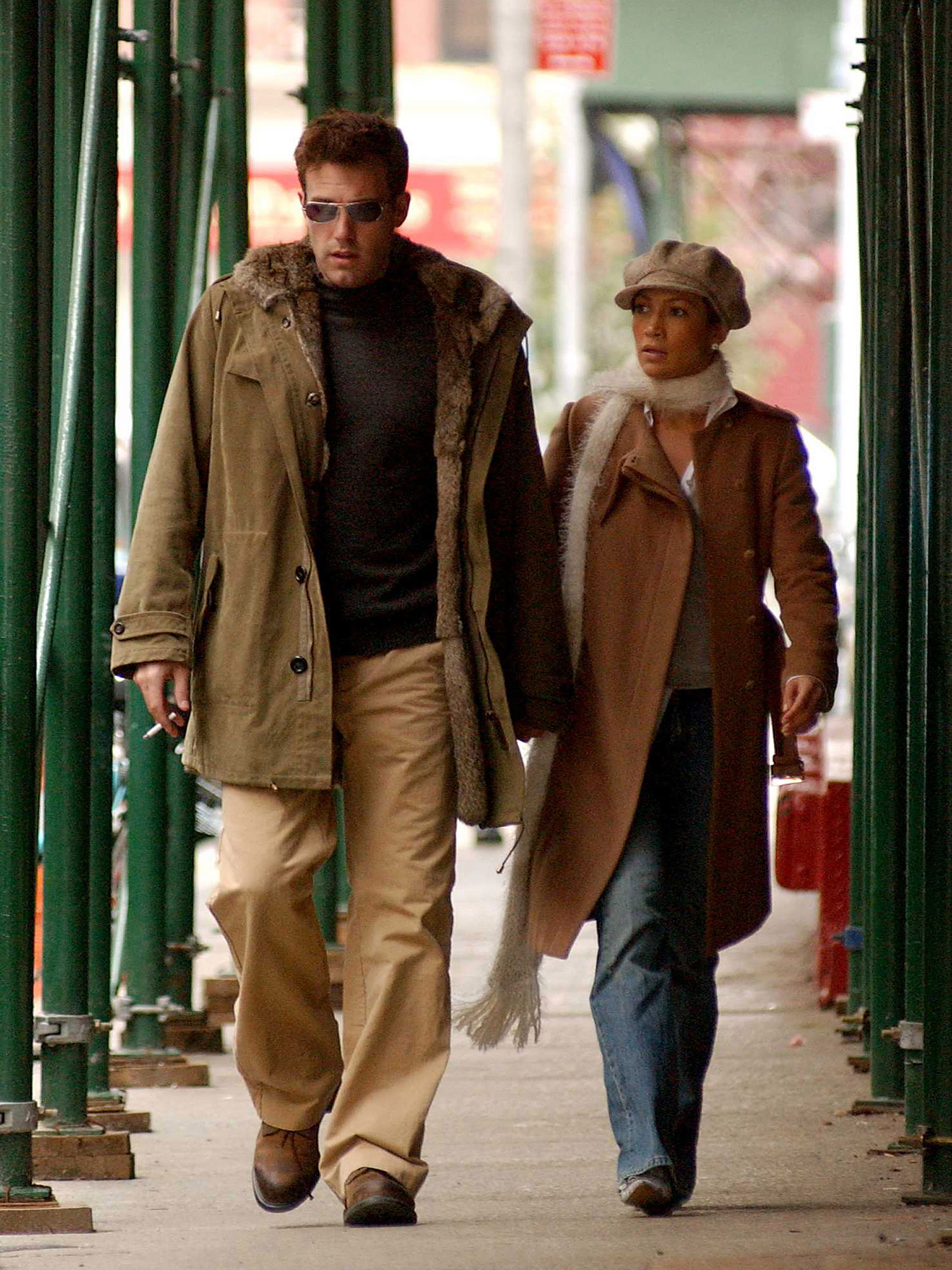 Clad in shades of khaki, the couple seemed to be in perfect style sync.
Getty Images

This November 2002 photo may have been snapped on a movie set, but the "Jersey Girl" co-stars' love was fur real.
Getty Images 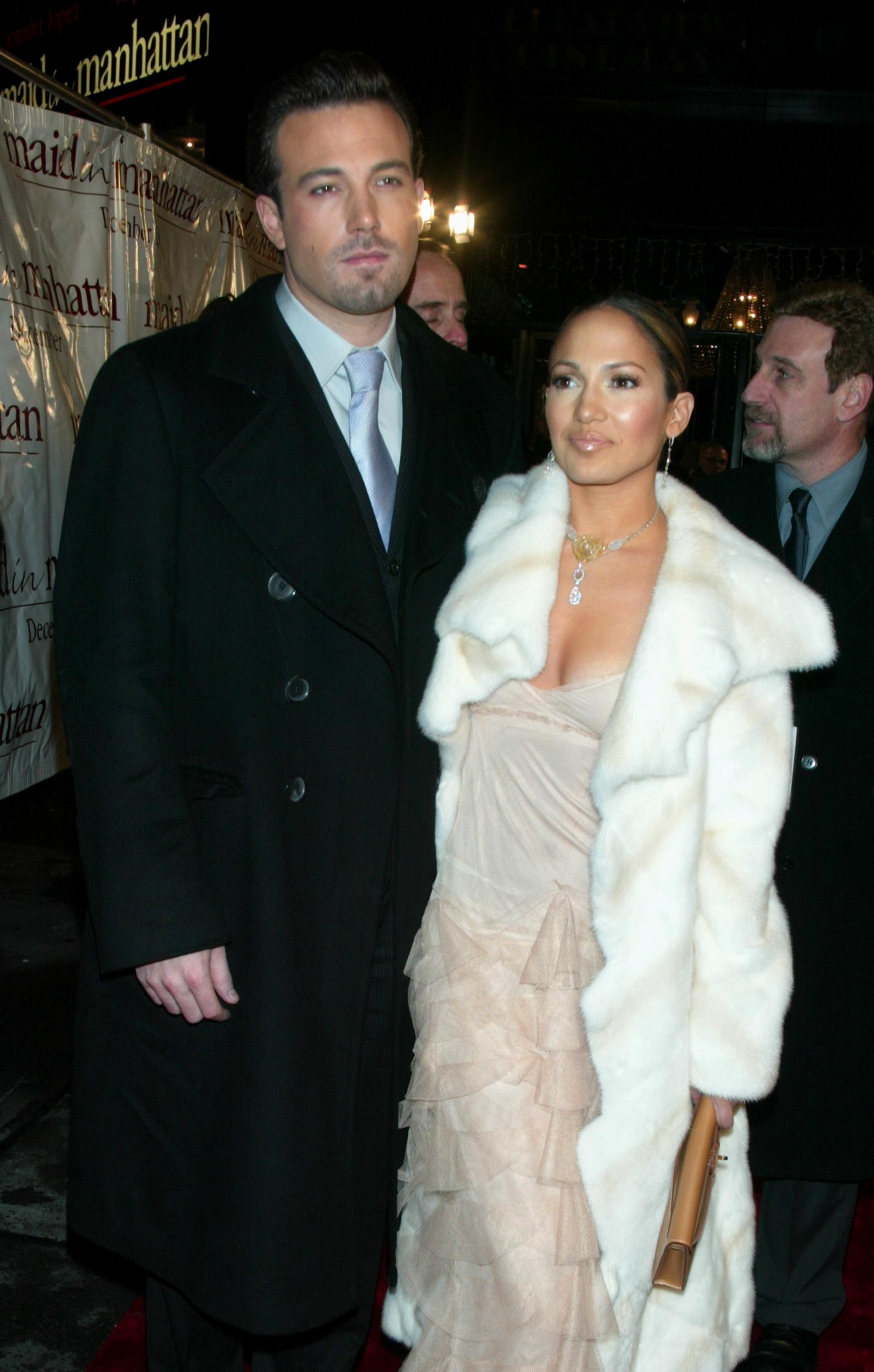 The couple brought their real-life love story to the December 2002 premiere of Lopez's rom-com "Maid in Manhattan," where the actress layered her pink ruffled Yves Saint Laurent gown with a white fur coat.
WireImage 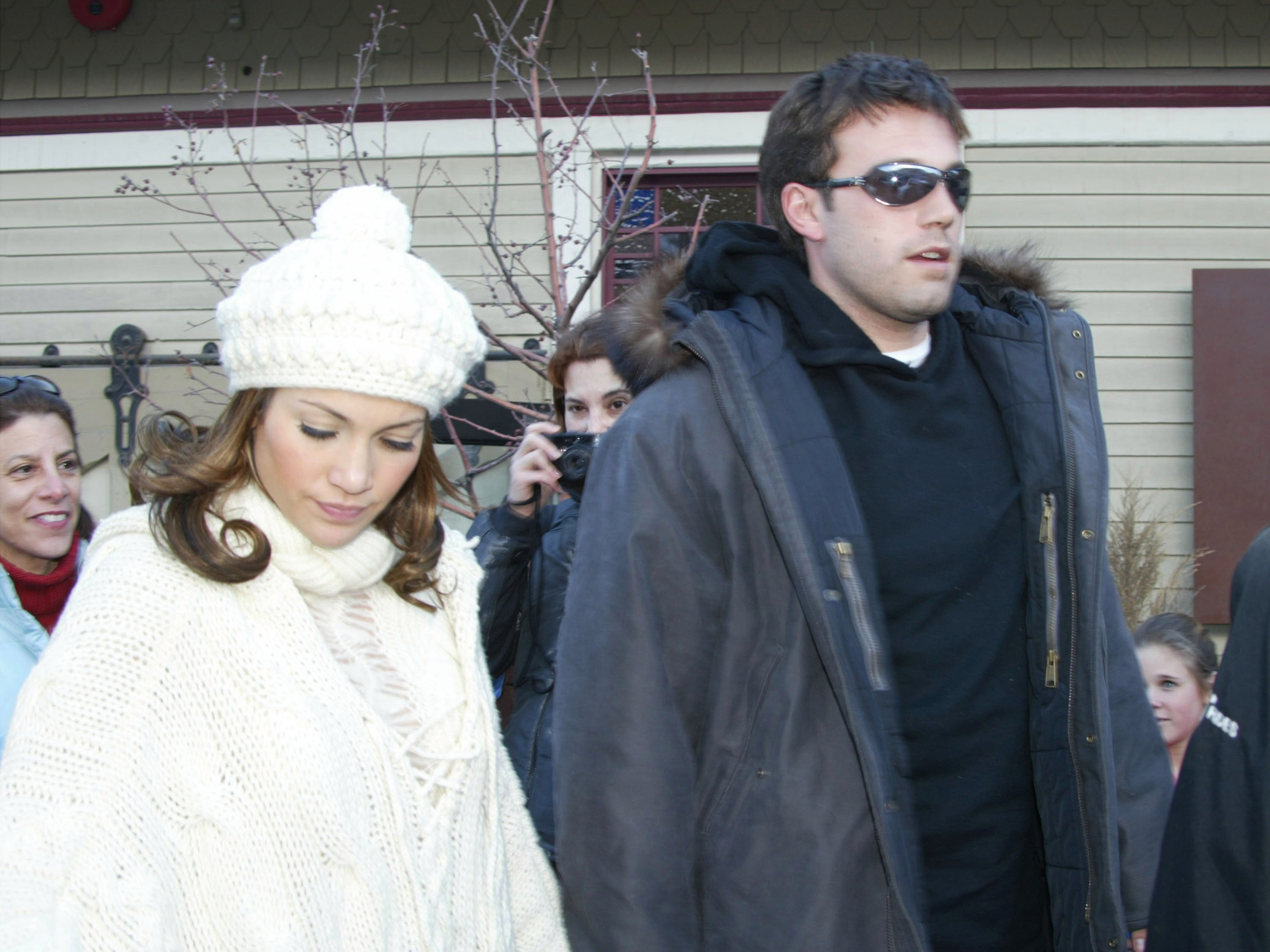 The newly engaged duo hit the Sundance Film Festival in January 2003, leaning on their love to keep them warm. J.Lo wrapped herself up in white knitwear, while Affleck put the "sun" in Sundance with his "Matrix"-style shades.
Getty Images 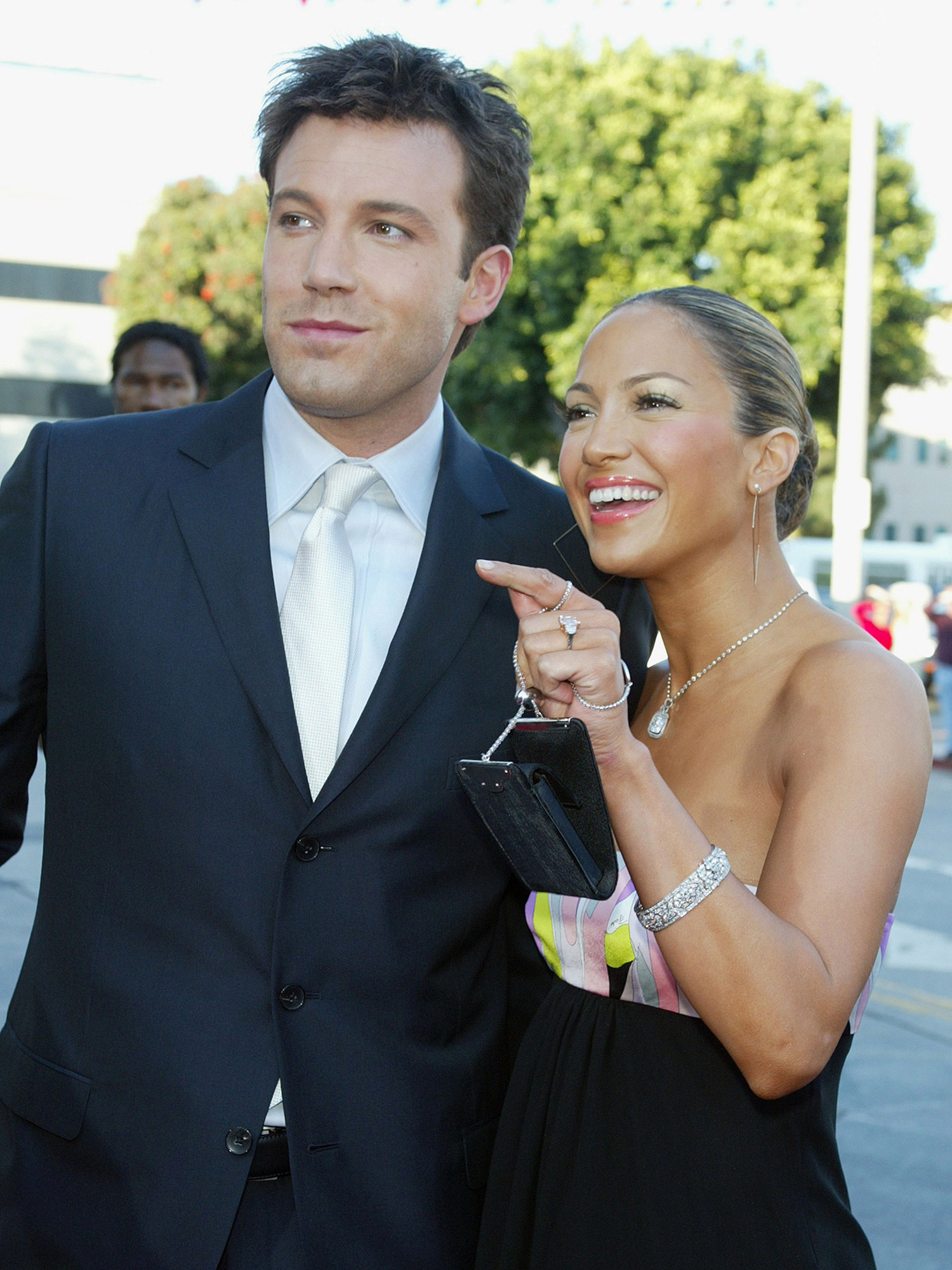 Jennifer Lopez's love might not cost a thing, but her Harry Winston engagement ring -- set with a roughly six-carat pink diamond -- was worth an estimated $2.5 million. She took the opportunity to show it off at the February 2003 premiere of "Daredevil," dressed in an Emilio Pucci gown that incorporated similar shades of rose.
Getty Images 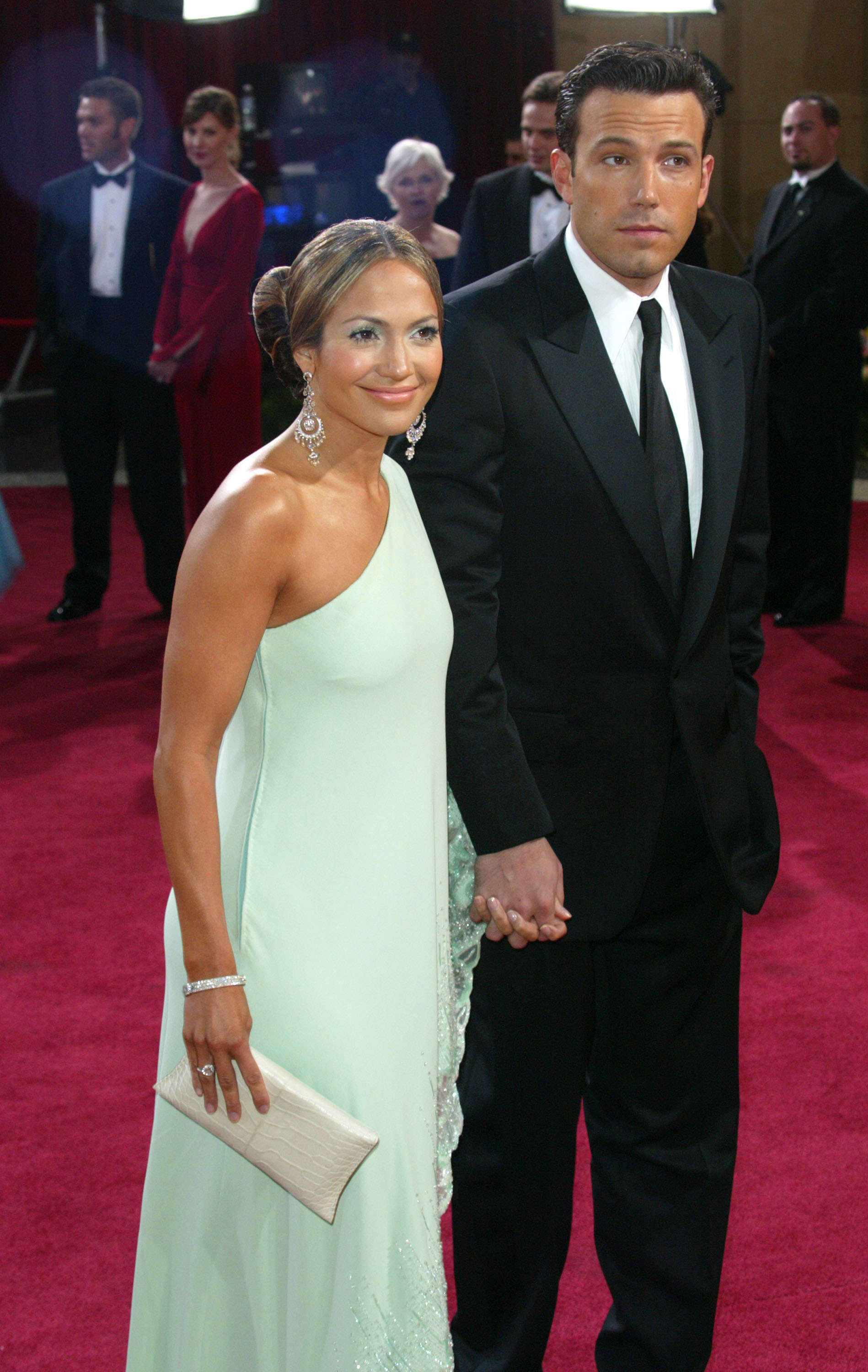 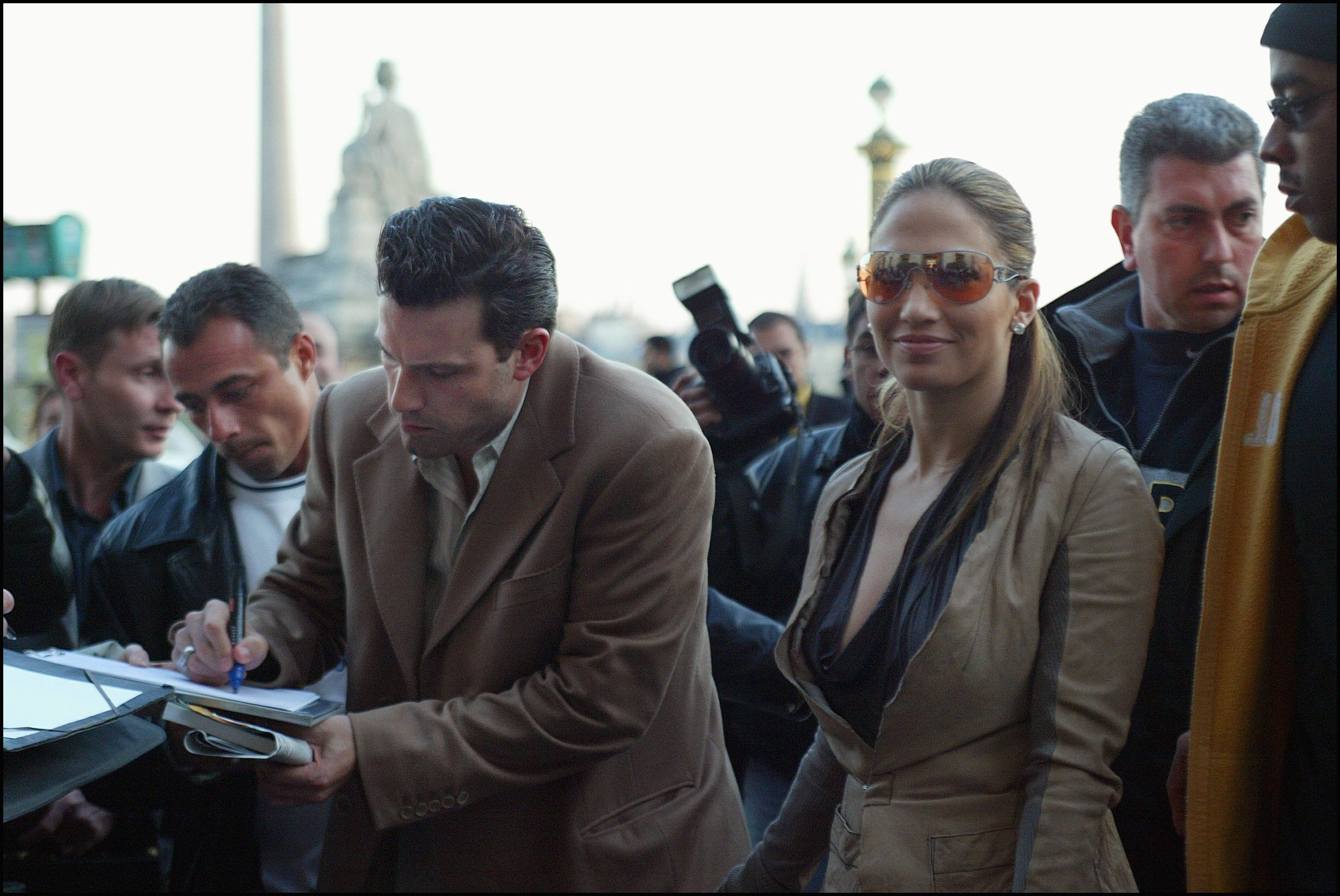 The couple twinned in brown blazers during an April 2003 shopping trip in Paris, stopping to sign autographs for their adoring fans.
Gamma-Rapho via Getty Images 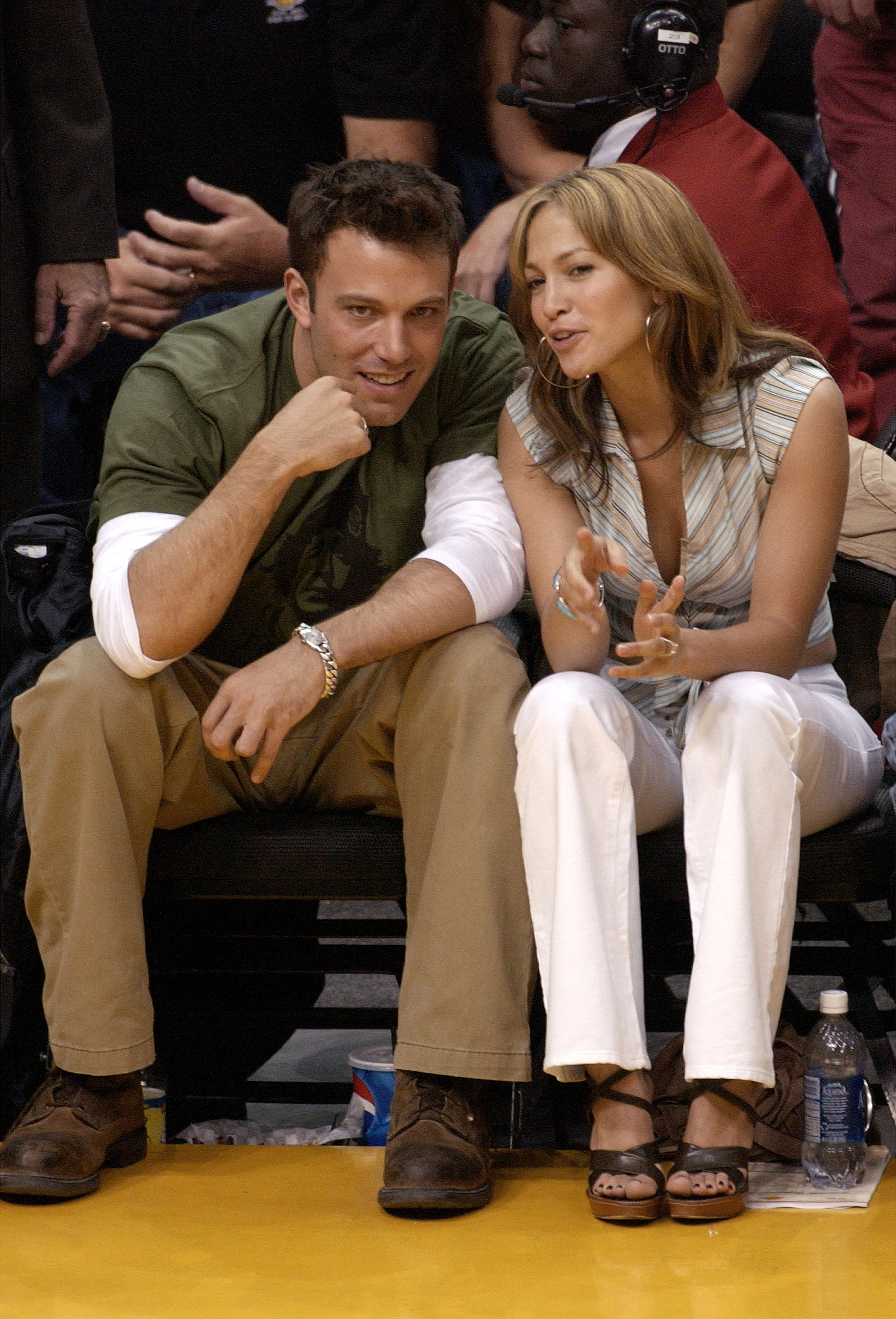 Lopez wore hoops to watch the Lakers and Spurs shoot hoops in May 2003. Affleck layered a green T-shirt with a white long-sleeved tee, completing his courtside ensemble with a silver watch.
Getty Images 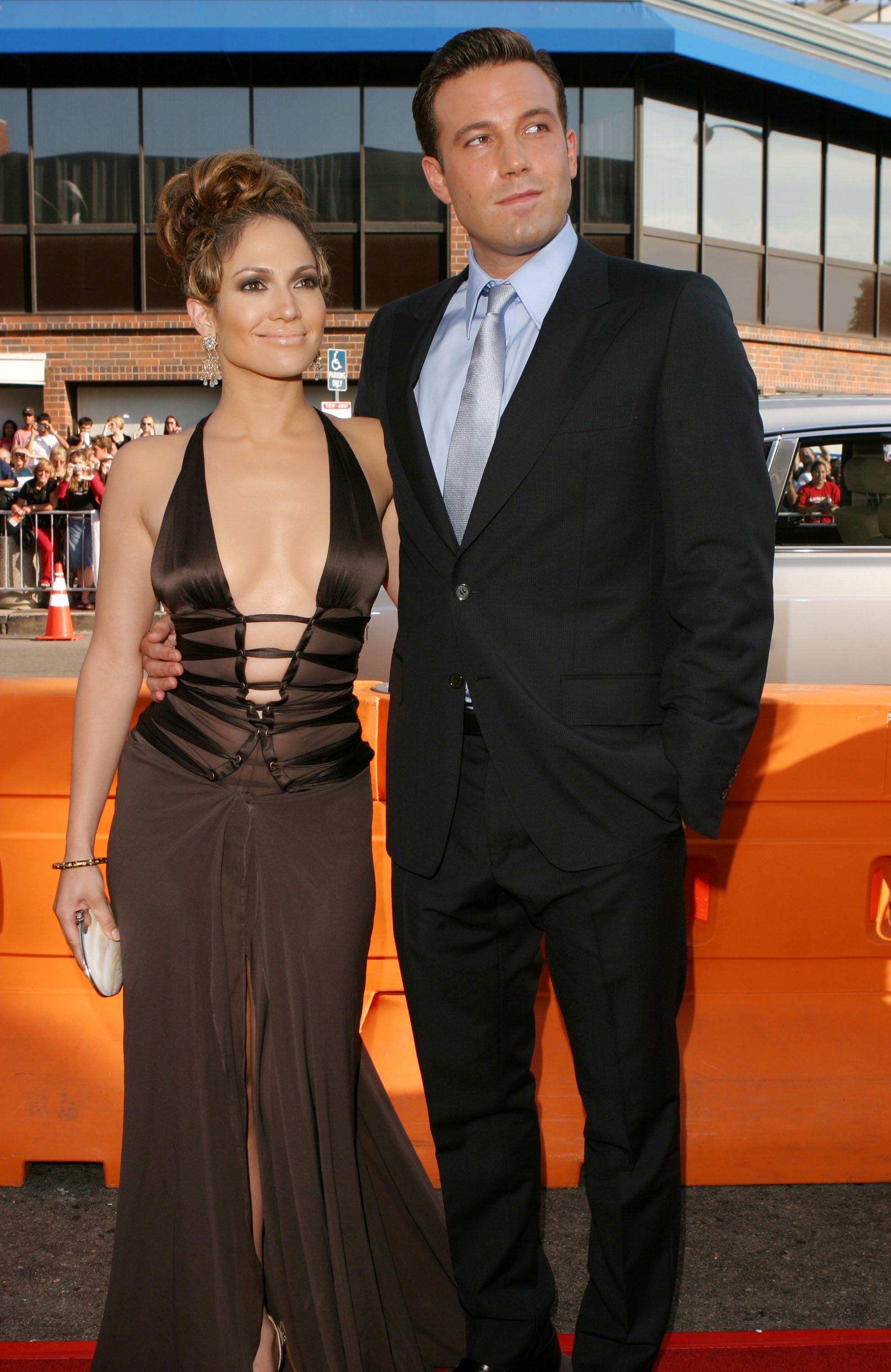 One year after meeting on the set of the critically reviled "Gigli," the pair hit the red carpet for the flick's premiere in July 2003. Lopez opted for a plunging brown Gucci gown, while her beau paired his suit with a soft blue shirt and tie.
FilmMagic 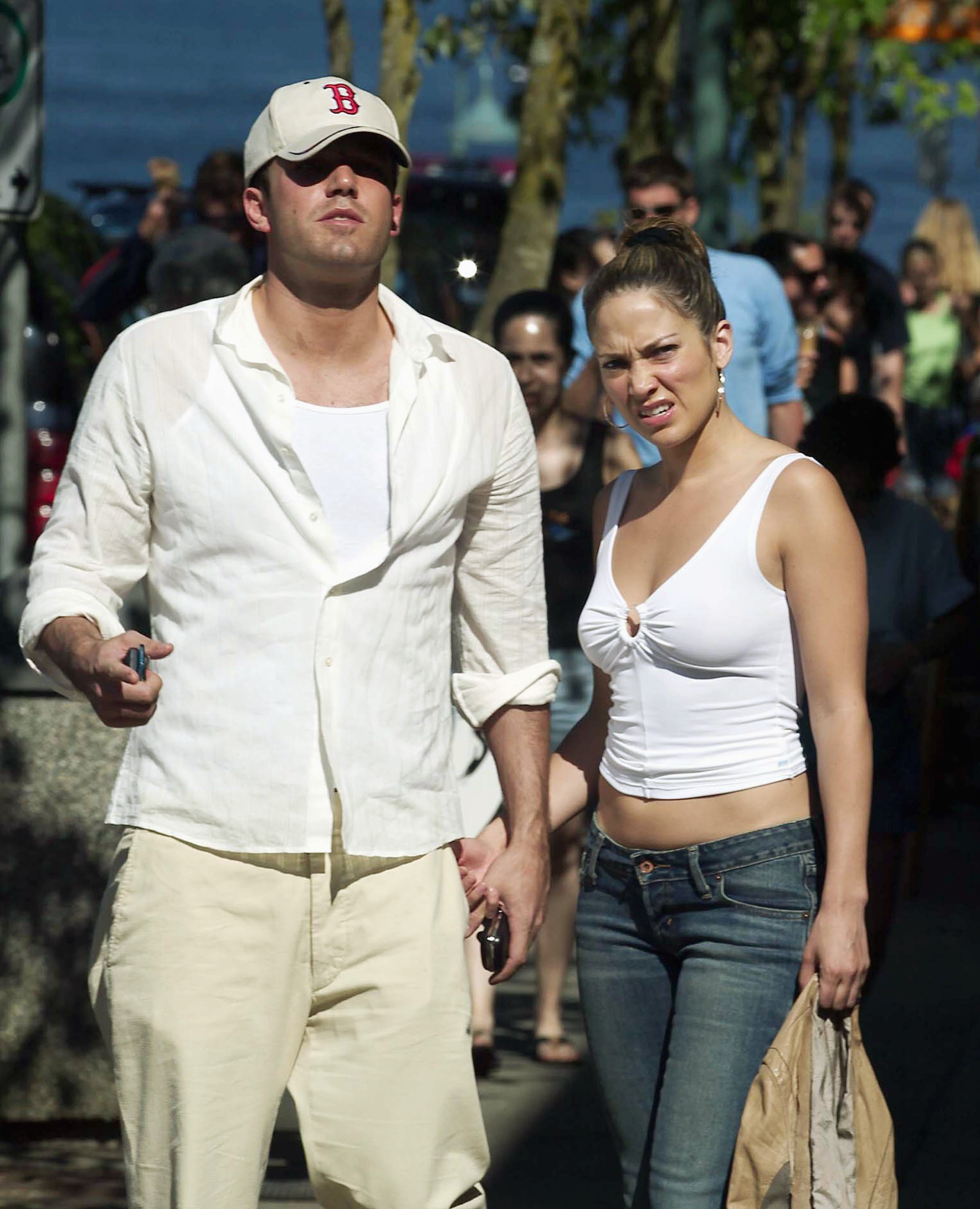 July 2003 was a white-hot summer for the superstar couple. Get a load of their matching white tank tops -- and J.Lo's dangerously low-rise denim!
Getty Images 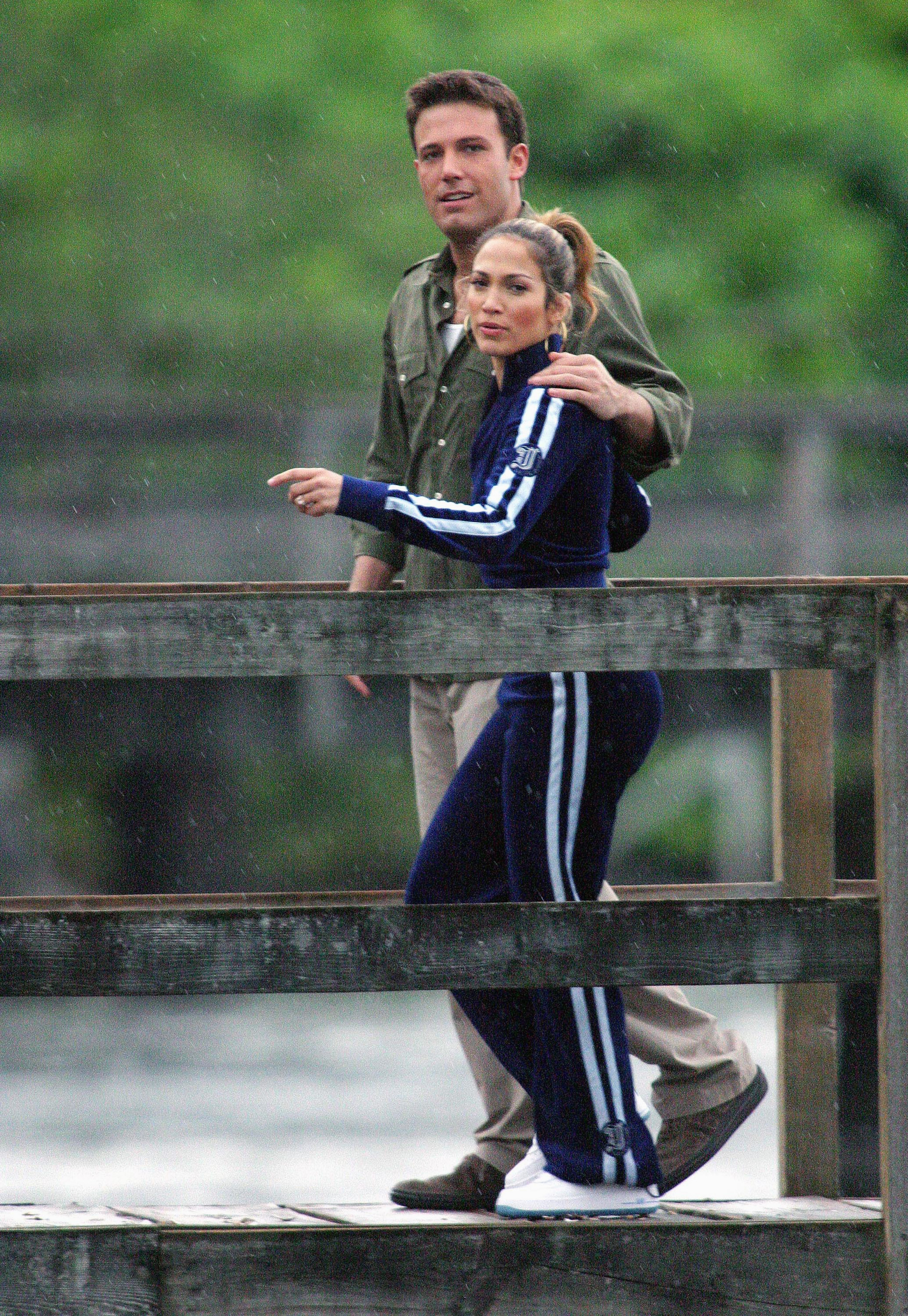 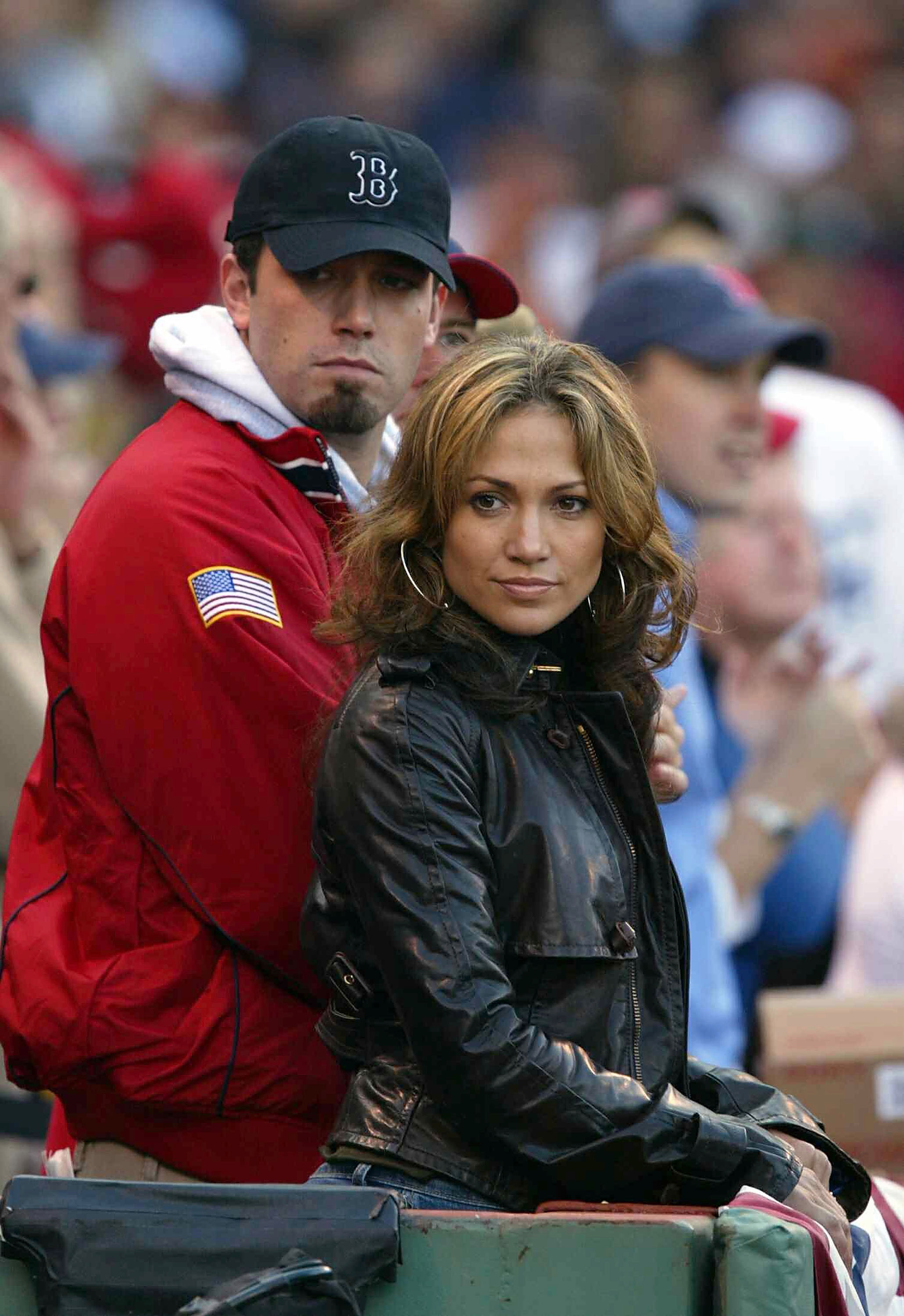 From the Bronx to Boston: The pair attended a Red Sox and Yankees game at Fenway Park in 2003. Affleck repped the Red Sox with his outfit, while Lopez paired a leather jacket with her signature hoop earrings.
Getty Images 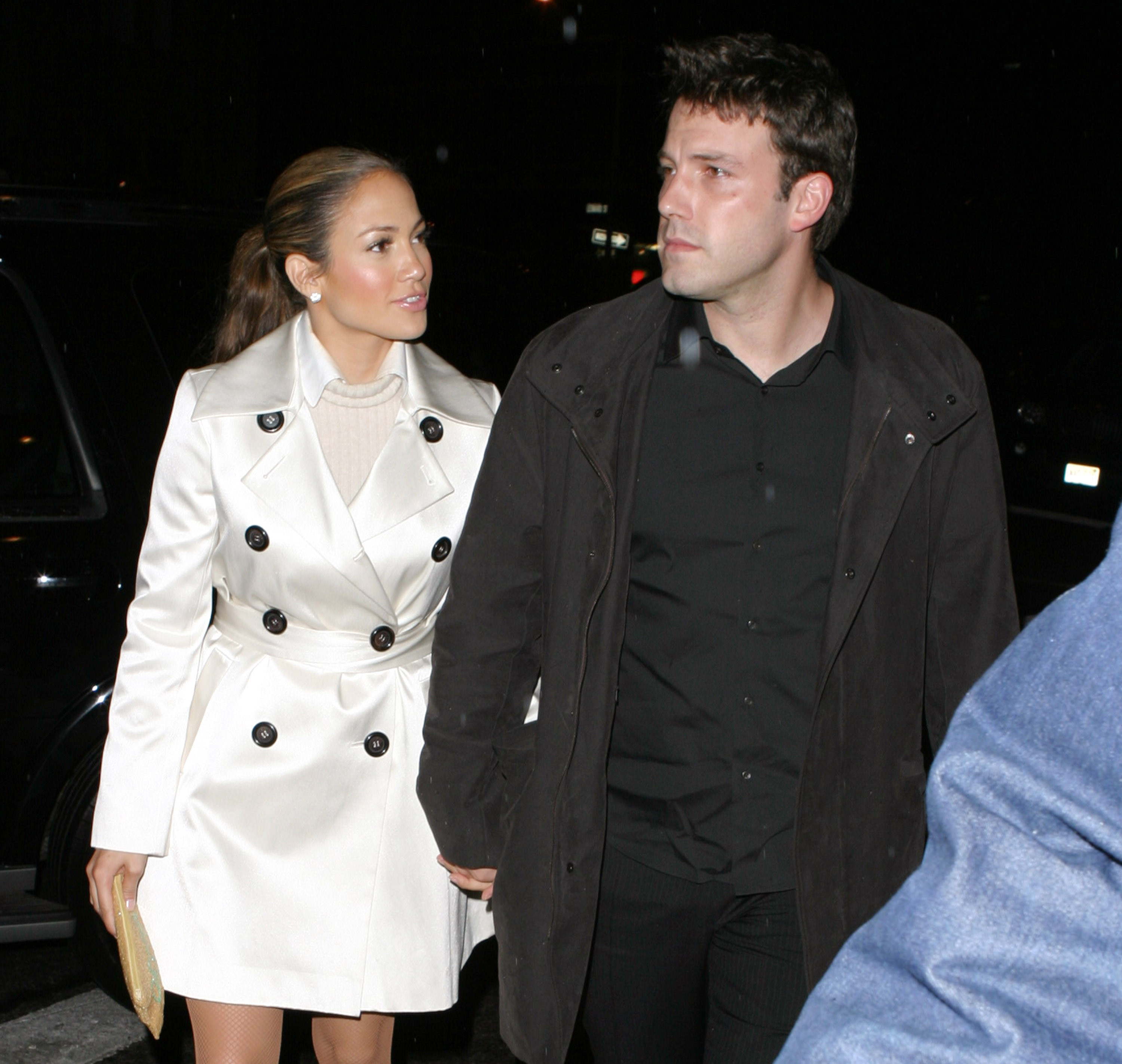 Just one month after postponing their wedding, Lopez and Affleck opted for opposite looks in October 2003, with the pop star in a white silk trench coat and the actor in head-to-toe black. By January 2004, they'd called it quits.
WireImage
This story originally appeared on: PageSix - Author:Hannah Southwick