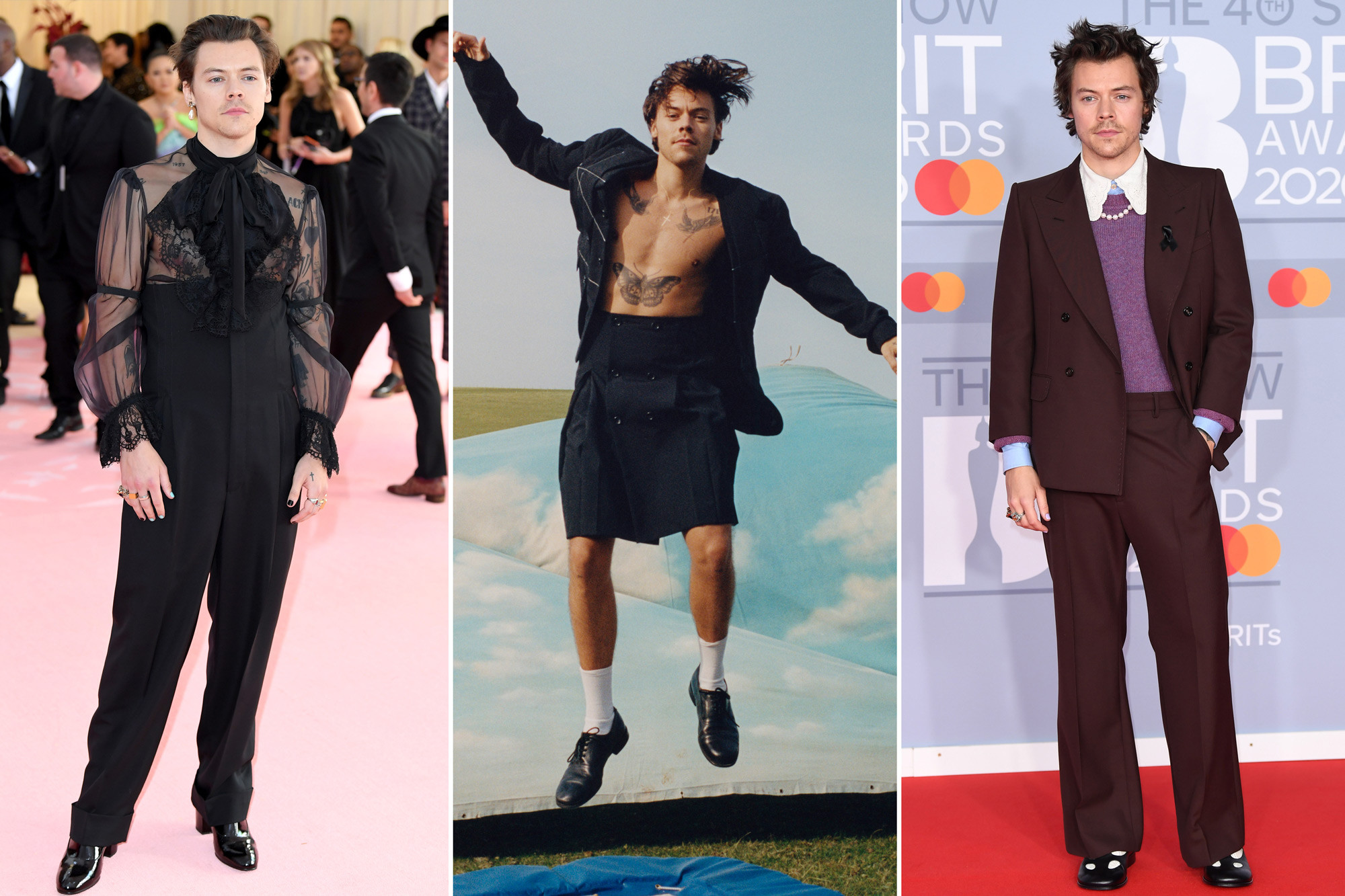 Harry Styles is all about breaking gender barriers when it comes to fashion, and loves to experiment with his look -- whether that means a colorful manicure, a strand of pearls or a full-blown ball gown. Most recently, the "Fine Line" rocker modeled a custom Gucci dress on the cover of Vogue, posing in other stereotypically feminine looks in the issue's pages.

"You can never be overdressed. There's no such thing," Styles told the magazine. "Now I'll put on something that feels really flamboyant, and I don't feel crazy wearing it ... Clothes are there to have fun with and experiment with and play with. When you take away 'There's clothes for men and there's clothes for women,' once you remove any barriers, obviously you open up the arena in which you can play." 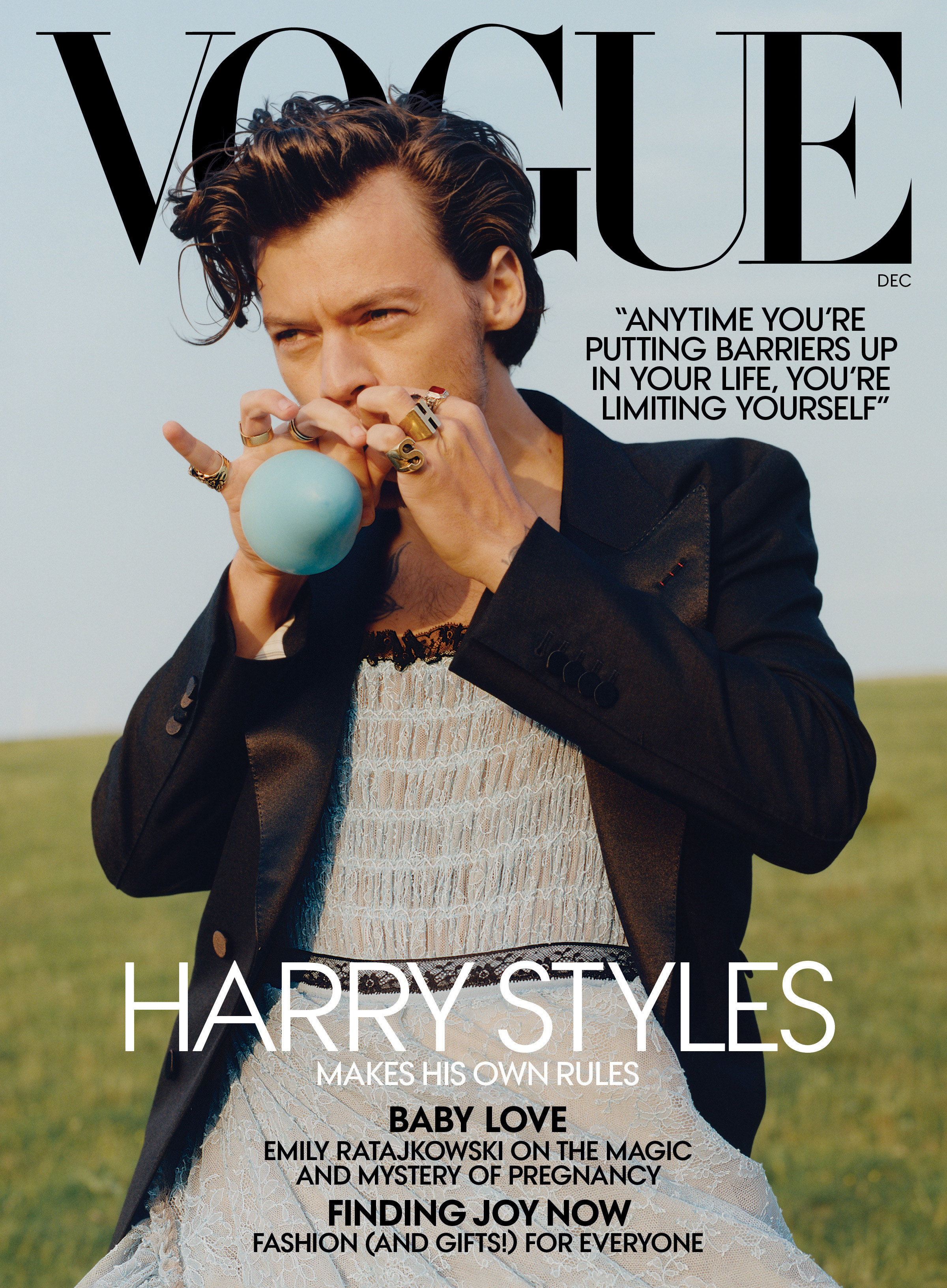 Styles is the first man to ever cover American Vogue solo, and while fans went crazy over the sight of the pop star in a full gown, Candace Owens slammed the look, calling for the return of "manly men." She was widely criticized for her reaction to the spread, though Harry has yet to comment.
Vogue 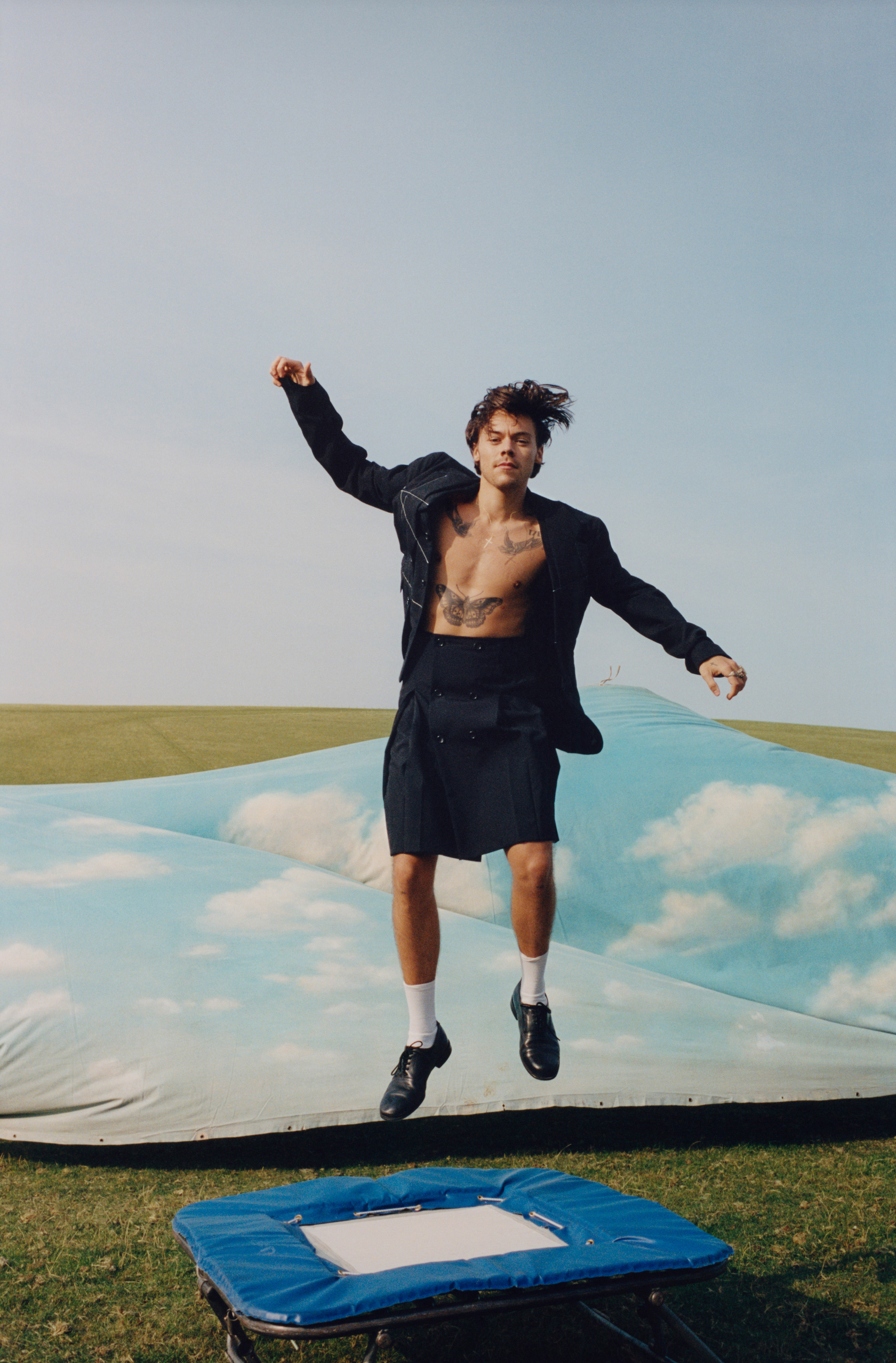 Inside the pages of Vogue, Styles wore this Comme des Garçons kilt and jacket set. "There's so much joy to be had in playing with clothes. I've never really thought too much about what it means -- it just becomes this extended part of creating something," Styles said.
Vogue 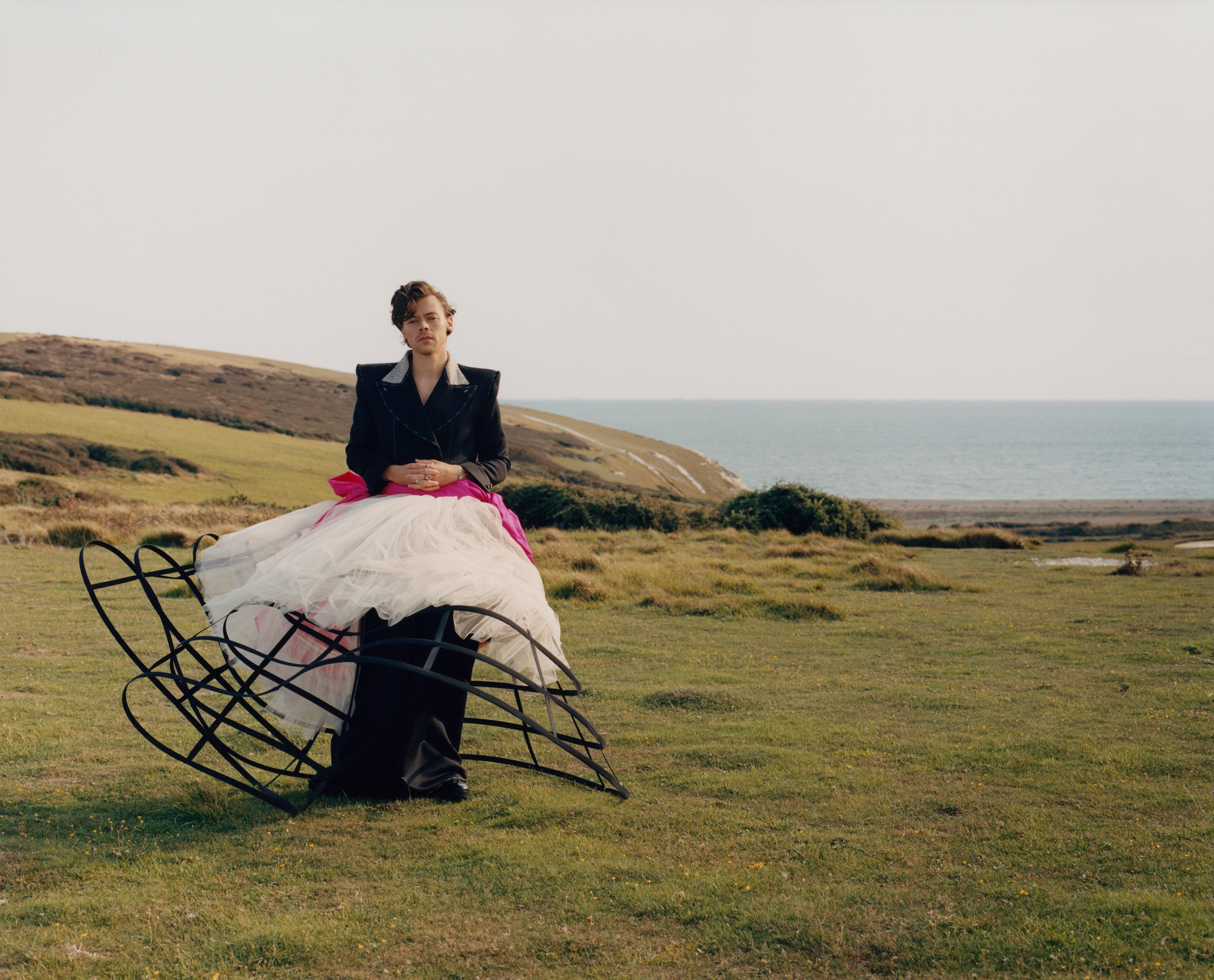 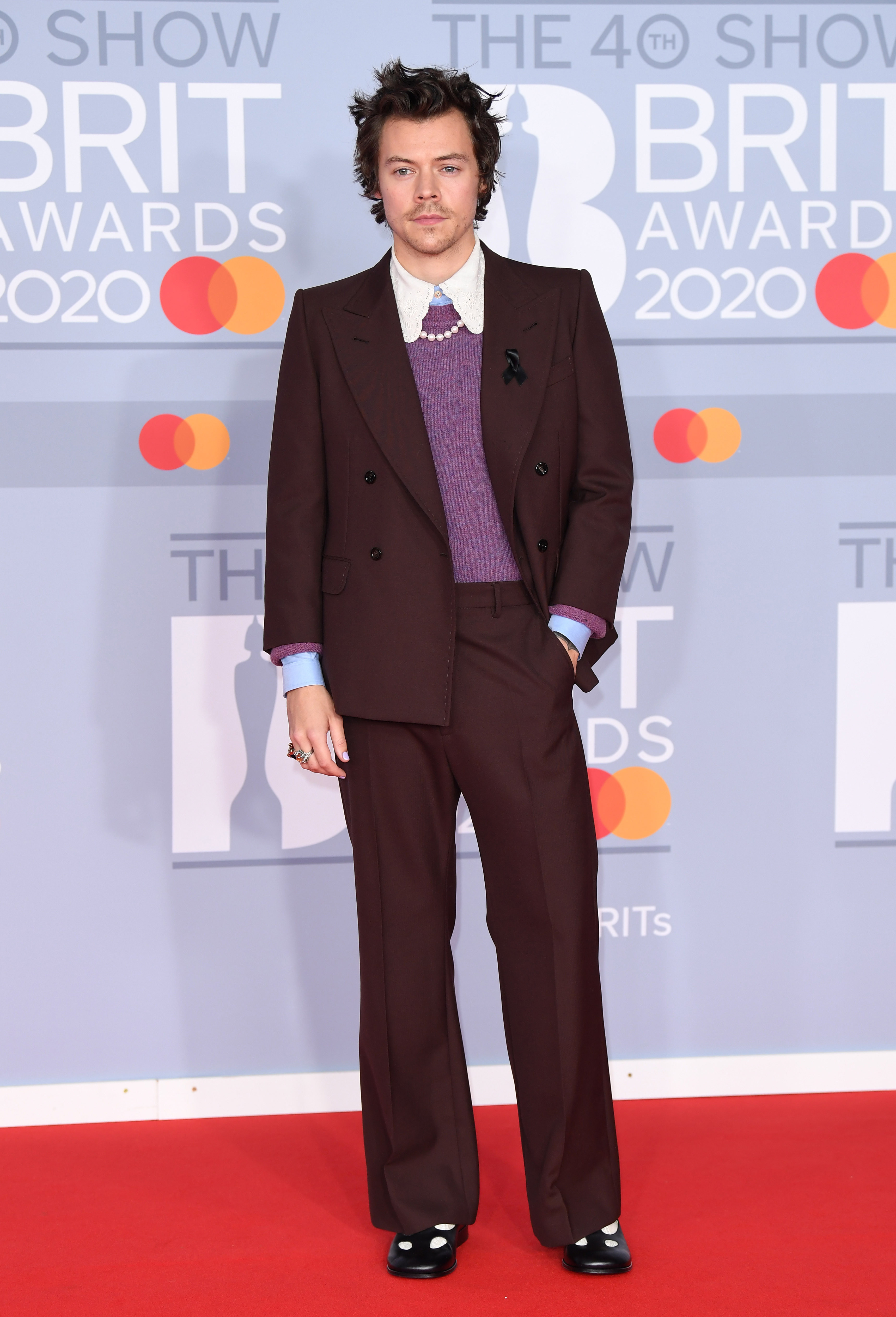 In February, Harry hit the red carpet at the 2020 Brit Awards wearing a maroon Gucci suit with feminine touches, including Mary Jane flats, a pearl necklace that has become a staple in his wardrobe and a Peter Pan-collared shirt.
Getty Images 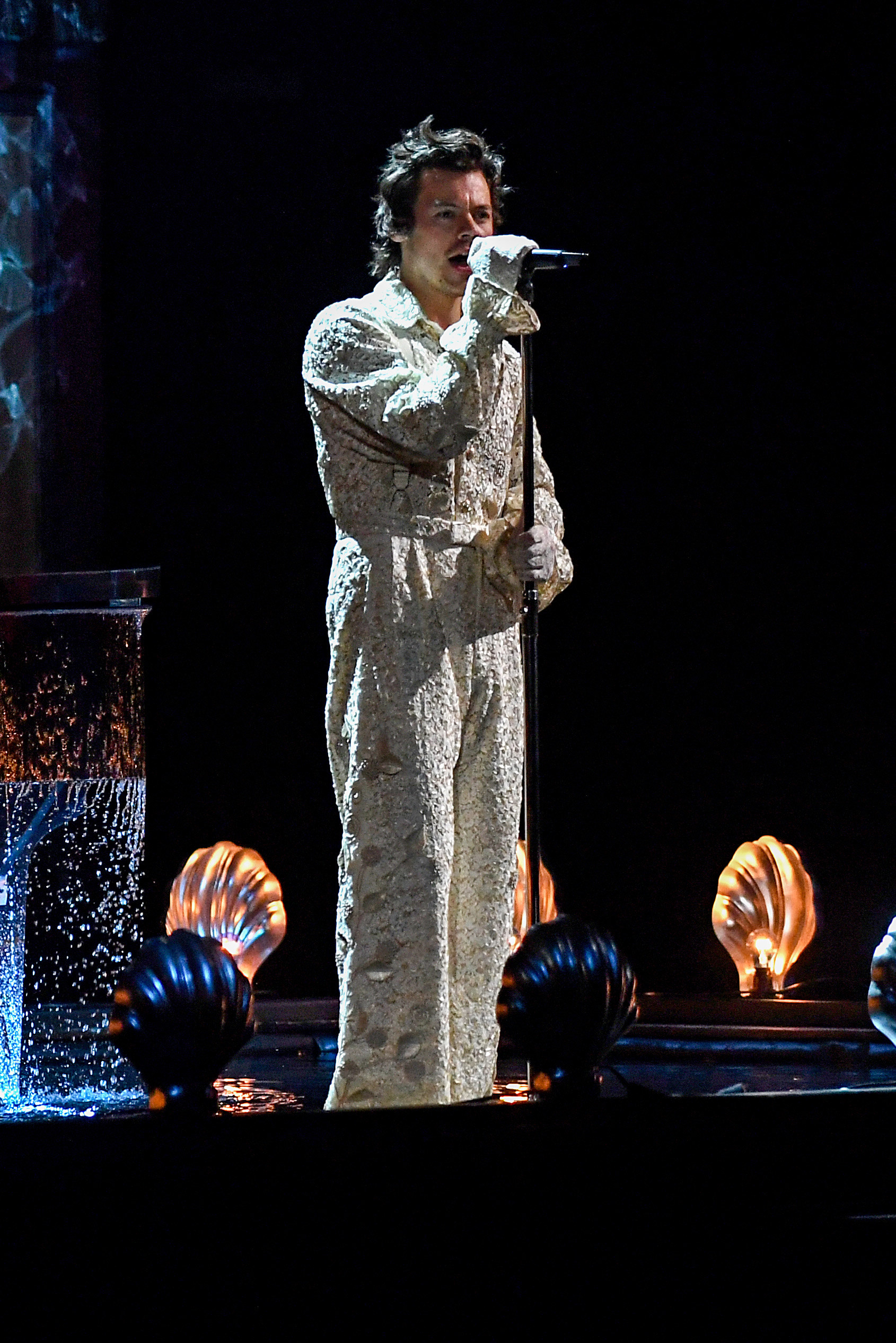 On stage at the Brit Awards, Styles sang his hit "Falling" while wearing a Prince-inspired all-lace outfit, including a ruffle-sleeved top and matching gloves.
Getty Images 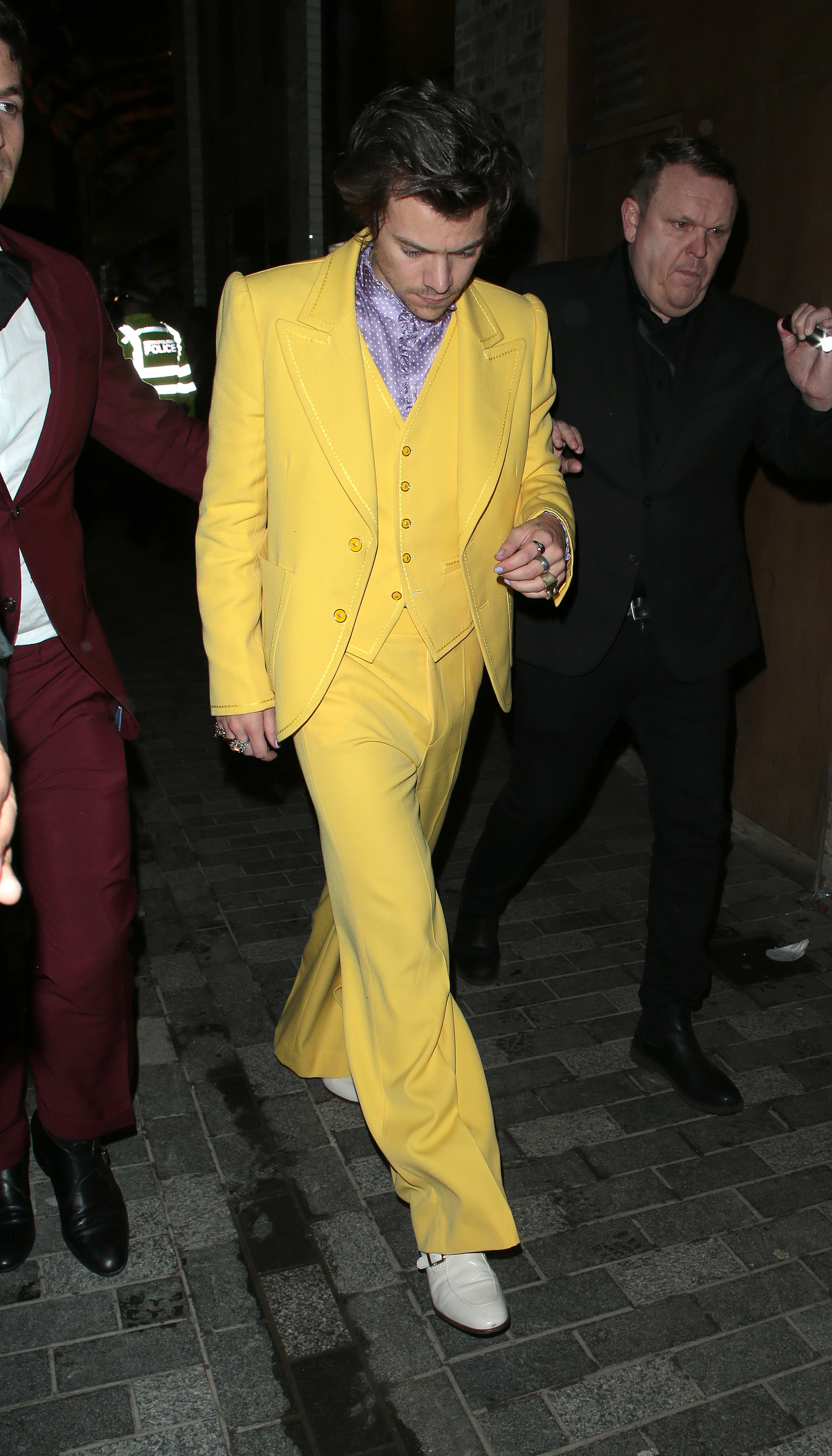 Later that night, Styles changed into a yellow suit with a purple silk shirt underneath, to which he added a playful chiffon bow.
Getty Images 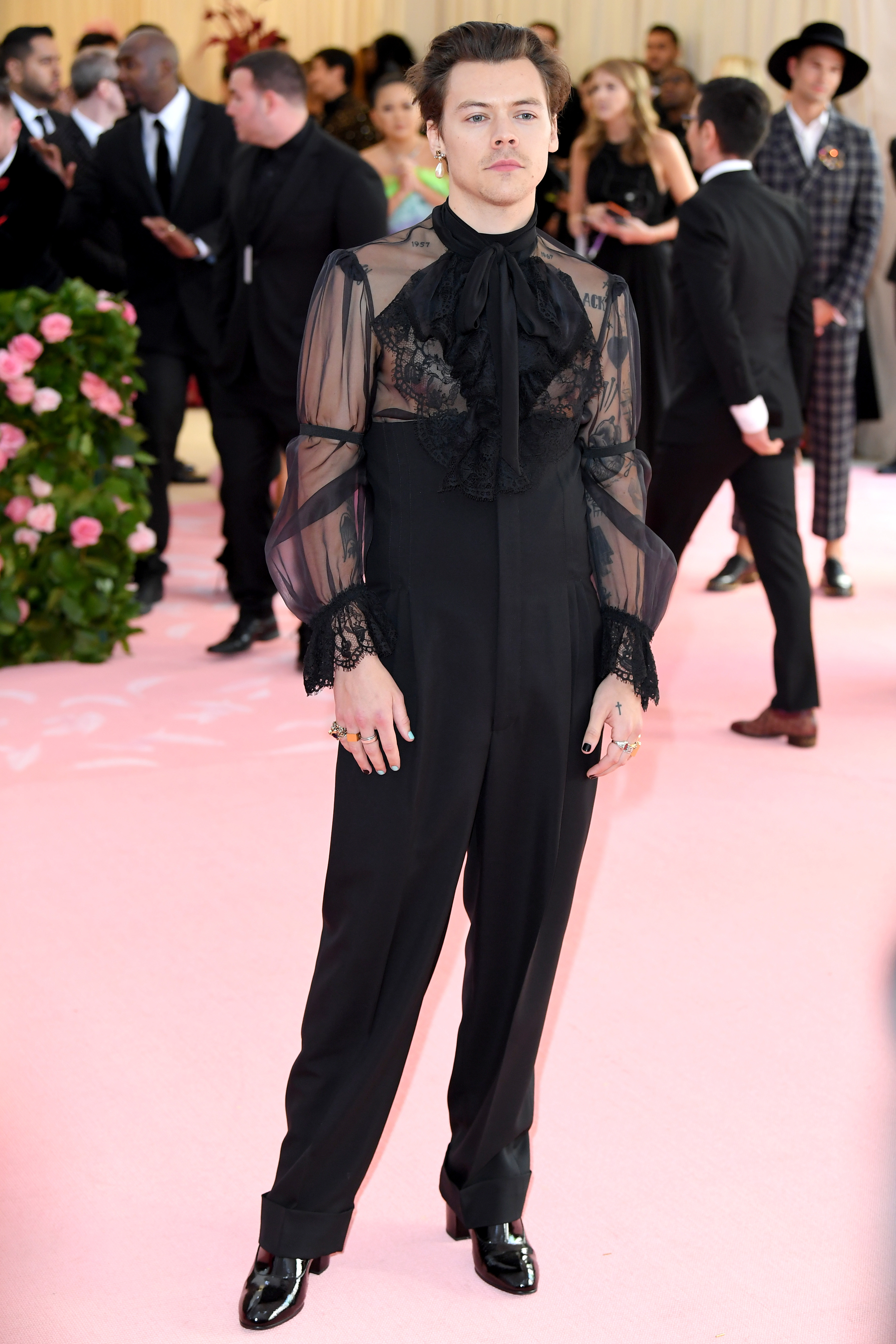 As a host of the 2019 Met Gala, Styles embraced the "camp" theme in a sheer Victorian-inspired Gucci top with ruffles, ultra-high-waisted pants and his now-infamous pink and blue manicure.
Getty Images 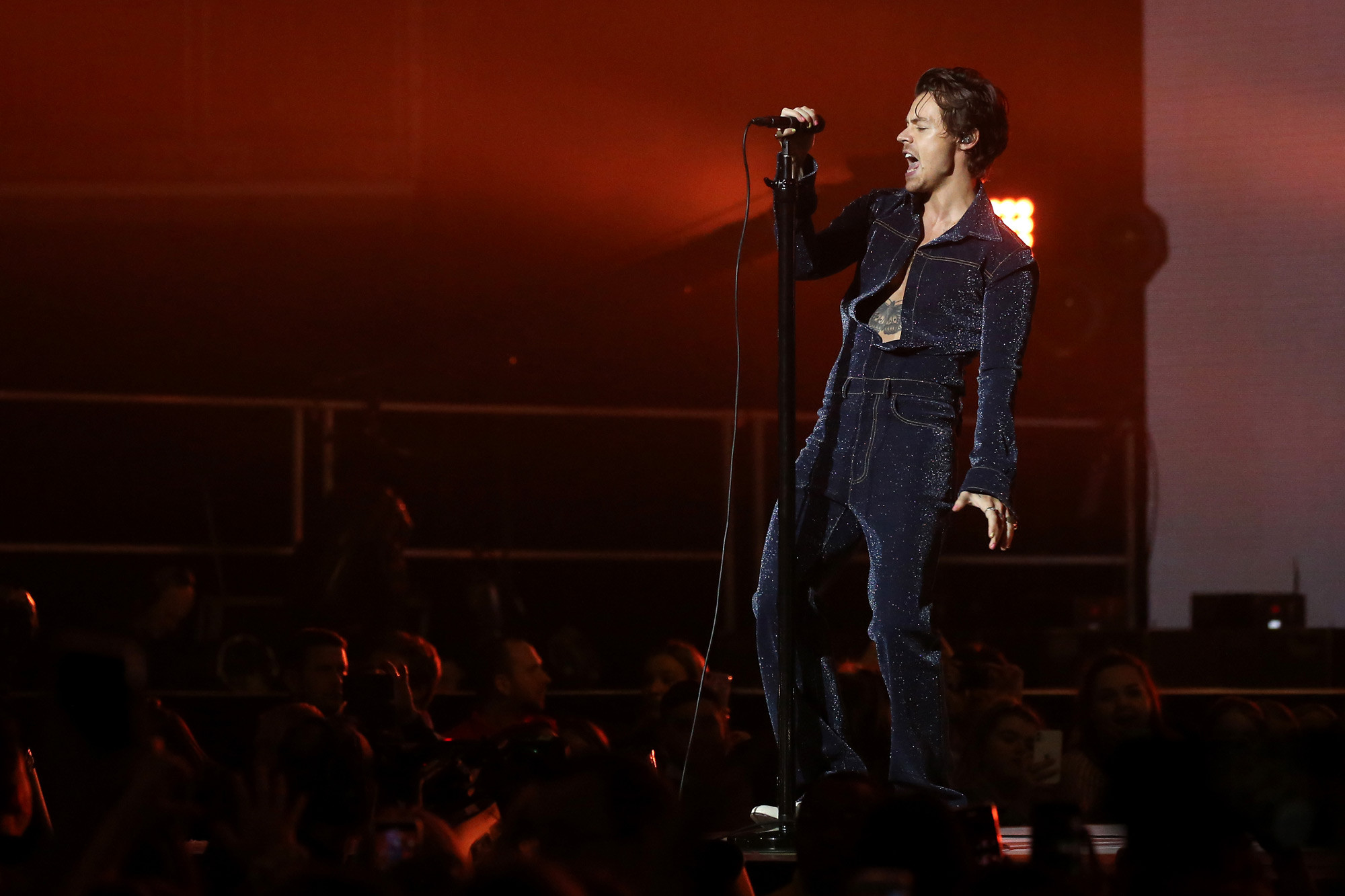 A simple jumpsuit gets a glam upgrade with all-over crystals. Harry wore this look unbuttoned down to his navel for Capital FM's Jingle Bell Ball 2019.
Getty Images 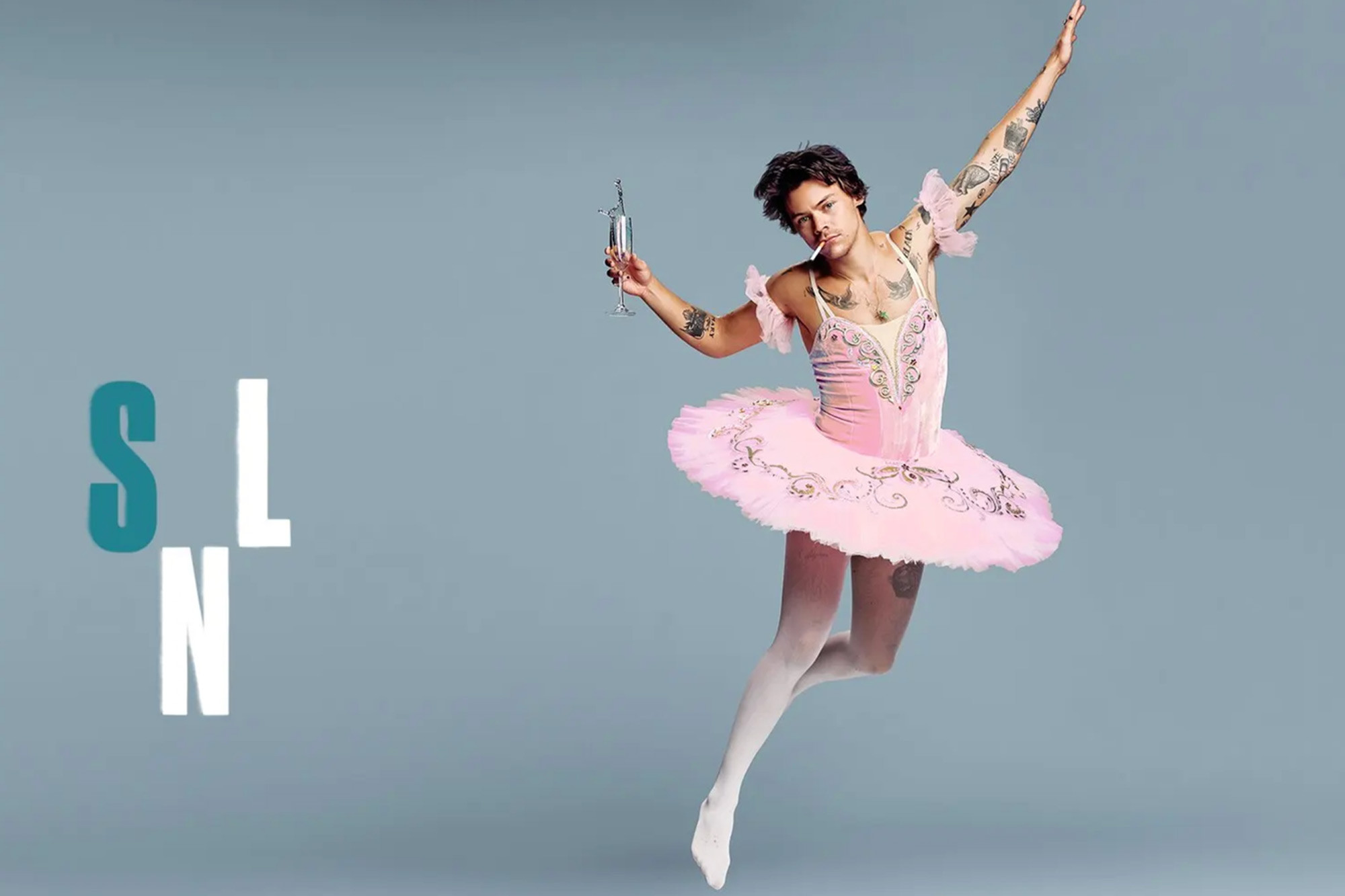 For a promo image for his "SNL" appearance in 2019, Styles went full ballerina in a pink tutu, holding a cigarette and glass of champagne.
SNL

Megyn Kelly vacations in a bikini and more star snaps