In Yearly Volume, the USDT Drops More than $500 Billion.

Over $7 billion has been taken out of Tether, prompting further concerns about the stablecoin's support

In Yearly Volume, the USDT Drops More than $500 Billion.

The true trading volume of Tether (USDT) increased somewhat in March, but has fallen by more than $500 billion since 2021.

Stablecoins are now more susceptible than they've ever been in March, which was a terrible month for the crypto world. Be[In]Crypto reports that stablecoins are still trading below their highs from last year.

Market capitalization has increased by at least 1 percent since February of this year as USDT continues to be the top stablecoin. As of the beginning of March, the stablecoin had a market cap of approximately $443 billion.

The real volume of USDT fell to a year-old low.

Some people might not use the token as much in the future because it competes with other currencies like BUSD, USDC, and TUSD.

According to research from Be[In]Crypto, the real value of the USDT dropped by 50% last month, to around $1 trillion.

In bad markets, the demand for stablecoins rises because many traders use these coins to avoid huge percentage losses. Last month, the real volume of the USDT was down 72% from May of last year, when it was at its peak.

There's been a drop in sales.

One of the main reasons why Tether's real trading volume has dropped is that there have been less transactions.

It looked like there were about 20 million and 28 million transactions in March and May 2021. In contrast, 4,266 and 4,806 transactions took place in February and March of 2022, respectively.

Volume in the USDT/BTC exchange rate was down in March, which is why

Last month, the yearly real volume drop was shown in the USDT/BTC trading volume, which was around $45 million, compared to $50 million in March 2021. 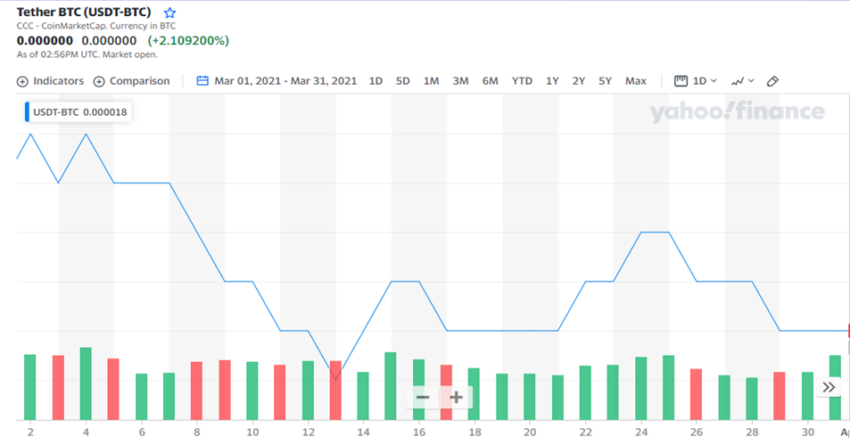 USDT is still the most popular and used stablecoin for traders and investors, even though it hasn't been as popular as it was in 2021.