We are at war with enemies of liberty, domestic and foreign.  Domestic enemies are now pressing relentlessly.  Why shrink from the word “enemy,” the simple definition of which is “one seeking to injure, overthrow, or confound an opponent.”  Who other are these warmakers?

This war is much more than disputes over fraudulent elections, though that would be cause enough.  The Democratic Party is a means.  The new war has been imagined, developed, and phased in over decades by the left.  It’s unconventional, asymmetric, and cunning.  It’s insidious, and has been about stealth and infiltration more so than outright confrontation -- until this year, when state shutdowns have been imposed to test the limits of tyranny… to gauge the level of tolerance of unconstitutional centralized rule over a free people.  Targeted violence has been employed in cities to engender angst, a sense of helplessness, and, consequently, to demoralize us.

The left’s warfare -- underwritten by coastal plutocrats, chiefly -- is comprehensive.  The target now are our politics.  The aim is to capture our national and state governments.  Dominating the means of government nearly ensures its ends, which have nothing to do with our freedoms.  Capturing governments is an endpoint -- the crowning achievement in the left’s long march.

What would follow leftist consolidation of power in the United States is the hoped-for realization of the leftist-globalist dream of a “Great Reset,” whereby the United States is subsumed in some oligarchic-Marxist transnational utopia.  As the history of the last 100 years teaches us abundantly, the left’s quests for utopia resolve in hells.  The body count reaches into the millions, thanks to leftist slaughter.

The new war has and is being waged principally against our culture -- against our values, beliefs, and mores.  It has been and is against the fundamentals of a healthy, free, and civil society.  The assaults are against what’s organic to a vital society: marriage, family, and children, neighborhood and community.  The tissue, bone, and sinew of American society must be separated and destroyed for the enemy to reconstruct society according to its perverse vision.

In the name of public health, our churches, synagogues, businesses, and schools suffer shutdowns at the whim of petty tyrants like Andrew Cuomo and Bill de Blasio.  Tens of millions of Americans are injured as a result.  All of us have been injured by degrees in assaults on our God-given rights.  We’ve been forced to wear masks to “stop the spread,” but, in fact, to compel subservience.

Our voices are increasingly silenced in social media.  The tech giants are imperious gatekeepers of speech; they’re eager facilitators of the gathering tyranny.  Step out of line and face restrictions or cancellation.

Men and women who dare to speak out and dissent -- or simply do their duties -- are cruelly doxed.  Cancel culture -- another means of censorship and punishment for noncompliance -- spreads like cancer into corporations and organizations.  White Americans are unjustly branded racist.  Demands for reparations and calls for reverse discrimination are commonplace among “woke progressives.”

Leftists, and even establishment Democrats, call for “truth and reconciliation” commissions to force patriots to repudiate their support for President Trump and express fealty to leftism’s strictures.  Failure to comply will be met with punitive actions along the lines of communist China’s evolving -- and sinister -- social credit system.

It’s good to understand where the leftist-oligarchs draw their intellectual firepower and conviction.  Three sources come readily to mind, all of whom have made critical contributions in modernizing Marxist war on America and Western Civilization.

The assaults, in part, are rooted in the works of Marxist Italian intellectual, Antonio Gramsci, whose thinking is summed up:

The defining Gramscian concept is that of hegemony. This denotes a level of political domination that extends beyond control of a state or a parliament into the realm of culture and ideas.

In the Frankfurt School -- a school of thought -- whose principals:

[snip] “are known for their brand of culturally focused neo-Marxist theory—a rethinking of classical Marxism updated to their socio-historical period. This proved seminal for the fields of sociology, cultural studies, and media studies.”

And in Maoism.  Mao, who waged a pitiless Cultural Revolution using China’s youth as avengers.  Per Andrea Widburg:

James David Banker’s article about the Cultural Revolution describes how schools were turned into places of propaganda rather than knowledge and how the indoctrinated students brutally turned on their teachers, their families, and their friends. 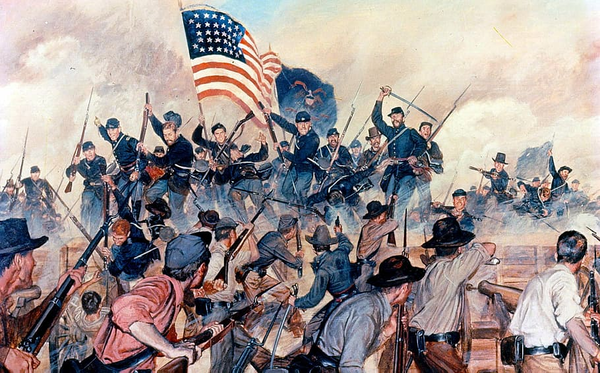 The new war being waged has less to do with a classic Marxist focus on economics and wealth disparities.  It’s the totality of Western experience that’s in the crosshairs.  The evisceration of the West is the goal.  The left desires to strip away the protections a free society affords to rule our very souls.

Many of us have termed what’s occurring here a cold civil war.  The last cold war the nation fought was a 45-year struggle against Russian communism.  It contained some of the elements we’re seeing in this civil war.  Disinformation, propaganda (the mainstream media’s domain), subterfuge, betrayal, and subversion, among other facets.  While the last cold war had enemies within, in this cold civil war the enemy within is diffuse, occupying positions of power in virtually every sector.  In fact, in sectors like tech, education, the media, arts and entertainment, whole populations are hostile to traditional America.

This enemy is formidable.  It’s entrenched with tentacles that reach throughout the country.  But we must keep in mind that American revolutionaries were up against a British Empire as formidable in its day.  But for God and the French, the Revolution would have likely foundered and failed.  Today, we still have God -- and we have a growing righteous anger at the injustices being done us -- but we await time and events to see if the equivalent of the French materializes.  Yet, we can say this with confidence: “If God is for us, who can be against us?”

Military strategists will tell you there’s a tendency to fight the last war.  It’s a disastrous error.  To win this war, we must first accept that we are at war, that the enemy is real and homegrown, and grasp why and how it’s being waged against us.  We must resist the temptation to believe that the full-blown tyranny described really can’t happen here.  We’ve received no pass, no exemption.  We face the most perilous challenge ever to our liberties.  We must accept the reality of this fight and engage with steely resolve and vigor or perish as a free people.

As Lincoln once remarked, “America will not be destroyed from the outside.  If we falter and lose our freedom, it will be because we destroyed ourselves.”

Though we prize our individuality, we must, compelled by circumstance, unite, fighting as one.  As Benjamin Franklin famously said, “We must hang together or, surely, we shall hang separately.”

Consider this: Perhaps the Good Lord, in His infinite wisdom, is allowing the threat of tyranny to arise on these shores precisely because we’ve been chosen to vanquish it.  Are we David to the left’s Goliath?  It’s also said that to whom much is given, much is expected.  We are now expected to bear the coming burdens -- to willingly accept costs and sacrifices -- to defeat an ancient enemy newly disguised, thereby restoring the fullest measure of freedom to our nation, and to again provide a beacon of liberty in a darkening world.

More from: J. Robert Smith
1
This is War
Filed under

Most Popular This Week
1
Blockchain is not required for Web 3.0, according to ...
2
Voyager defaults on $675M loan to 3AC; lawsuit follows
3
Why is Bitcoin valuable?
4
Why the billions in fraud were caused by the ...
5
Roe always looked like a house of cards
6
Analysis: It's 'foolish' to say Bitcoin can't drop below ...
7
Bitcoin To Zero Dollars? Crypto Currency Crash of 2022
8
Lies about secret migrant flights in the mainstream media
9
Bitcoin at $20,000: End of the Throne
10
Musk denies promoting crypto, supports DOGE